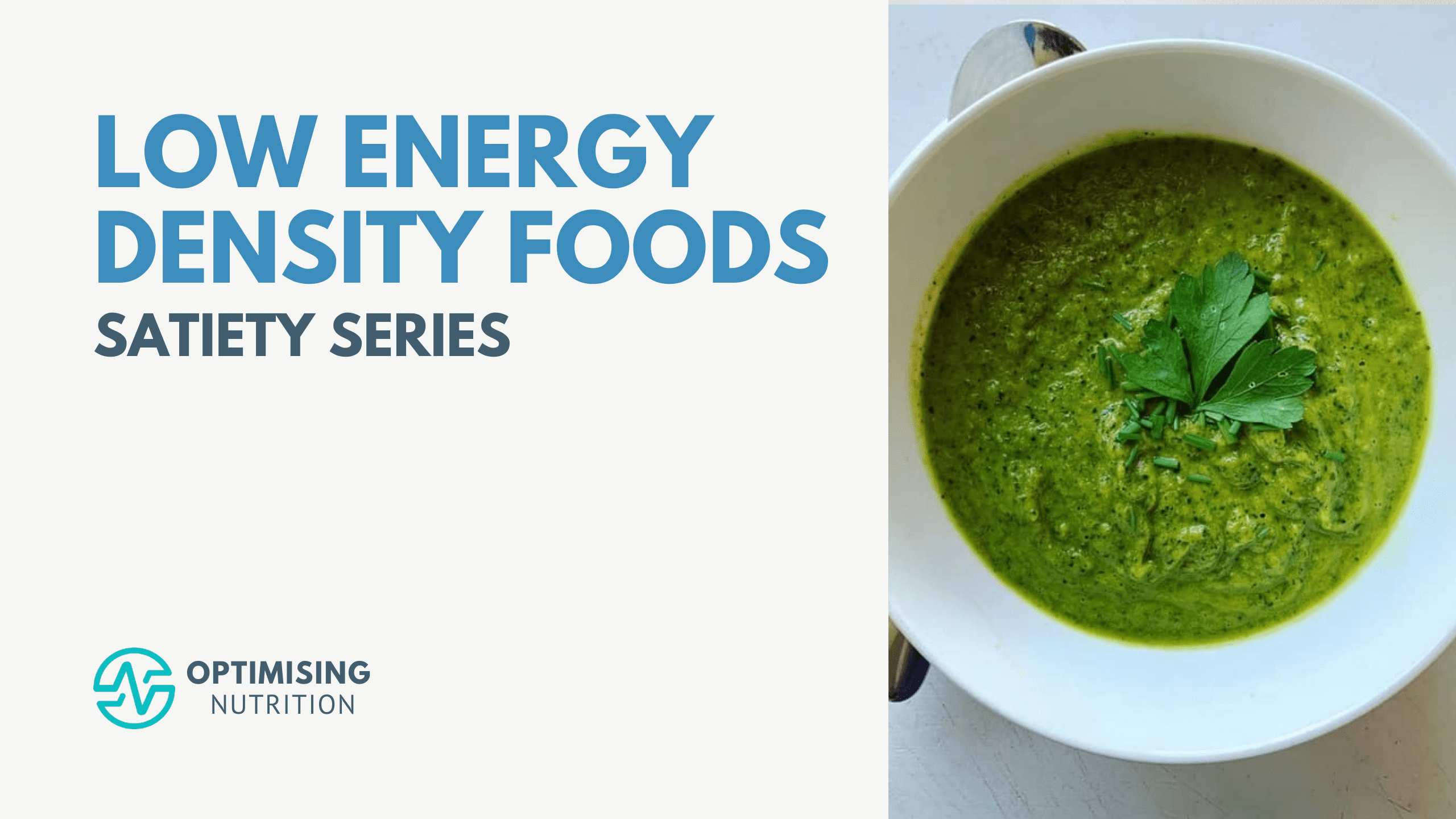 One question we often get is:

The short answer is yes.  Low energy density foods are hard to overeat and can help you feel full in the short term.

However, the full answer is a little more nuanced.

Satiety – or the sensation of fullness and satisfaction you get from food over the longer term – is multifactorial.

As you will learn in this article, other parameters may be more useful to help you eat less without having to track your food or muster unsustainable levels of willpower.

What Are Low Energy Density Foods?

The energy density of food is generally shown as calories per gram of food.

If it isn’t listed on the label the weight of food can be calculated by summing:

Weight, on the other hand, is always shown on labels and in food databases.  So, for the purpose of this article, we will look at calories per unit of weight.

Which Foods Have the Lowest Energy Density?

Is apple low energy density?  What about potatoes, chard or grapes?

To give you an idea of what low-energy foods look like in practice, we have provided a list of low energy density foods below, sorted from lowest to highest energy density.

These foods will be challenging to overeat, especially if you don’t add extra fat or dressings.

There are some lower energy density seafood and animal-based foods.

However, these foods typically contain more fat and less water than plant-based foods, giving them a higher energy density.

To give you a feel for what recipes with fewer calories per gram look like, we have some example low energy density NutriBooster Recipes below:

You will note that these tend to be smoothies, soups, and salads.

For comparison, we’ve listed some examples of popular energy dense foods.  These may be ideal if you are lean, very active and thus need more energy.  However, they are likely not optimal if your goal is to eat fewer calories and lose body fat.

Nuts and plant-based oils have the highest energy density.  These energy dense foods would be much easier to overconsume.

High-fat animal-based foods tend to have a high energy density, so the weight of food to reach your daily calorie budget would be fairly low.

Some people report that they feel full quickly on these foods, but this may be because they have been able to consume a lot of calories quickly.  Unfortunately, without precisely tracking your food, it’s hard to judge satiety per calorie just by how you feel.

How Much Do Low Energy Dense Foods Impact Satiety?

But how much of a difference does moving from high to low energy density foods make?

The chart below shows the effects low and high energy density foods have on satiety.

It’s worth noting that we get most of the benefits when we move from very energy-dense foods to moderately energy dense foods. Moving to extremely low energy density foods doesn’t provide much additional benefit.

Our data analysis also shows that as you reduce your intake of (energy dense) fat-containing foods, it becomes harder to overeat these (low energy dense) low-fat foods.

But Is Low-Fat Really Where It’s At?

The idea of reducing our intake of high-fat foods has been the cornerstone of the ‘conventional nutritional wisdom’ for decades, particularly since the 1977 Dietary Guidelines for Americans was introduced.

We have been advised to minimise our consumption of fat because it contains more than twice as many calories per gram as carbs and protein.  But sadly, in spite of trying to follow this lower fat advice we have just eaten more and gotten fatter.

Over the past half-century, our intake of both fat and carbohydrates has increased.

Food processing has enabled more of our foods to become a similar mixture of fat and carbohydrates.

Do High Volume Foods Make You Feel Fuller for Longer?

People who promote a vegan or plant-based lifestyle point out that high-fat foods are not as filling as fruits and vegetables.

Plant-based diet advocates like Joel Fuhrman and Neal Barnard talk about low energy density as a critical element of the effectiveness of their programs.

Professor Barbara Rolls has also published the Ultimate Volumetrics Diet based on her research into low energy density foods.  Professor Rolls’ diet plan is based on the idea that people typically eat a constant weight of food.  While this is partially true, it’s not the whole story, particularly over the longer term.

Before we dig deeper into the data analysis, it’s essential to understand the difference between satiety and satiation.

Consider how a big bowl of watery soup may leave you feeling full immediately after you eat it.  However, there’s a good chance you’ll be hunting for some more energy dense foods in only a few hours.

Conversely, low energy density veggies alongside a lean steak may keep you from thinking of food for many more hours.  So while this meal provides more calories, it’s likely to bring you satiation and satiety for long and short-term satisfaction that will allow you to eat less.

What Other Factors Align With Satiety?

While low energy density foods tend to align with a lower energy intake, our analysis shows that numerous quantifiable food parameters also affect whether (or not) we will eat less across the whole day.

The table below shows a selection of these parameters ranked by the most to least substantial effect each has on satiety based on our analysis of 125,761 days of data from 34,519 Optimisers.

Does Adding Water to Your Meal Help?

The problem with energy density comes when we consider foods like fruit, watery soups, or shakes containing a significant amount of water.

While they may be filling in the short term because of their volume, they, unfortunately, don’t keep us satisfied for long, and definitely not satiated for the whole day.

Many people argue for drinking large amounts of water to ‘keep your stomach full’.  While this has some merit–as thirst can be mistaken for hunger—water has very few (if any) nutrients.  Thus, it does not satisfy your cravings for vitamins, minerals, essential fatty acids, or amino acids.

Many weight loss ‘gurus’ recommend drinking water with meals.  However, this might do more harm than good for your digestion from a physiological perspective.

Your stomach contains concentrated amounts of hydrochloric acid (stomach acid) to break down your food.  Similar to diluting acid in chemistry class, adding water when eating a meal tends to weaken your digestive ability.  In theory, this could leave you absorbing fewer nutrients.

The bottom line is: liquid calories are not satiating over the long term.  So if you want to feel fuller for longer, chew your food and don’t drink it!

The table above lists 39 factors that coincide with eating less across the day.  However, all these food parameters don’t act independently.

Using multivariate analysis, we can tease out which factors affect satiety have the most statistically significant, independent effect on satiety.

Energy Density with Protein and Fibre

We know from our previous analysis that protein % and fibre are two key parameters that influence satiety over the longer term.

The chart below shows the interplay between macronutrients and average daily energy intake.  It’s not just about reducing fat to increase satiety.  Instead, it’s about reducing energy from both fat and carbs while prioritising foods with more fibre and–most importantly–a higher protein %.

Reducing either fat or carbs impacts daily energy intake similarly.  However, limiting energy from carbs and fat while increasing protein % has the most significant effect on satiety and will keep you feeling satisfied for longer!

Next, we’ll look at our multivariate analysis for energy density with protein, fibre, and various micronutrients included as well.

The results of the multivariate analysis show that:

The bottom line:  Once you accurately account for other factors that have a statistically significant effect on satiety, the benefit of lower energy density disappears.

Once you have dialled in nutrient density, worrying about a lower energy density appears to be a bad idea!

If you want to improve your satiety across the day, it’s better to focus on foods and meals with a higher nutrient density to ensure you get the protein, vitamins, and minerals you require at the expense of minimal energy.

The chart below shows the micronutrient profile of the top 50 NutriBooster Recipes in terms of nutrient density, showing that we easily meet the Optimal Nutrient Intake stretch for all of the micronutrients.

By comparison, if we rank the recipes by energy density, we get a much lower overall nutrient density score.  We end up missing out on several essential nutrients, including selenium, zinc, thiamine, niacin and all of the amino acids.

Short-term feelings of fullness from soups and shakes are not particularly helpful if your body craves the other essential nutrients it needs to thrive and goes in search of more food as soon as the bulky meal clears through your stomach.

The chart below illustrates how improving diet quality by optimising nutrient density will significantly enhance your satiety, reduce your cravings, and lower the quantity of food you tend to eat.

How Can I Reduce My Energy Intake?

If you want to increase your satiety and reduce how much you eat across the day, targeting nutrient-dense foods is more effective than low energy-density foods.

You can optimise your nutrient density by increasing your intake of foods that contain more nutrients with less energy.  This is illustrated in the nutrient-dense foods chart below (download printable .pdf version here).

Simply focusing on low energy foods might not supply you with an adequate amount of the essential micronutrients.  As a result, only eating low energy density foods can increase calorie intake because they are less satiating over the long term.

Finally, the lists below illustrate what nutrient-dense foods look like.  As you can see, they still have a fairly low energy density, but a high nutrient density to ensure you get everything your body requires from the food you eat.

Some examples of our most nutrient-dense NutriBooster recipes are listed below:

If you’re interested in how ‘nutrient-dense’ your current diet is, you can see your nutrient profile for free using our 7-Day Nutrient Clarity Challenge.

After tracking your current diet in Cronometer for a week, our Nutrient Optimiser software will give you a prioritised list of foods and NutriBooster recipes to help you plug any nutritional gaps you may currently have.

To help you level up your nutrient density, we’ve prepared a Nutritional Optimisation Starter Pack to ensure you’re getting all the essential nutrients from your everyday foods.

Once you join, you will find the Nutritional Optimisation Starter Pack in the discovery section here.

2 thoughts on “Low Energy Density Foods and Recipes: Will They Help You Feel Full with Fewer Calories?”