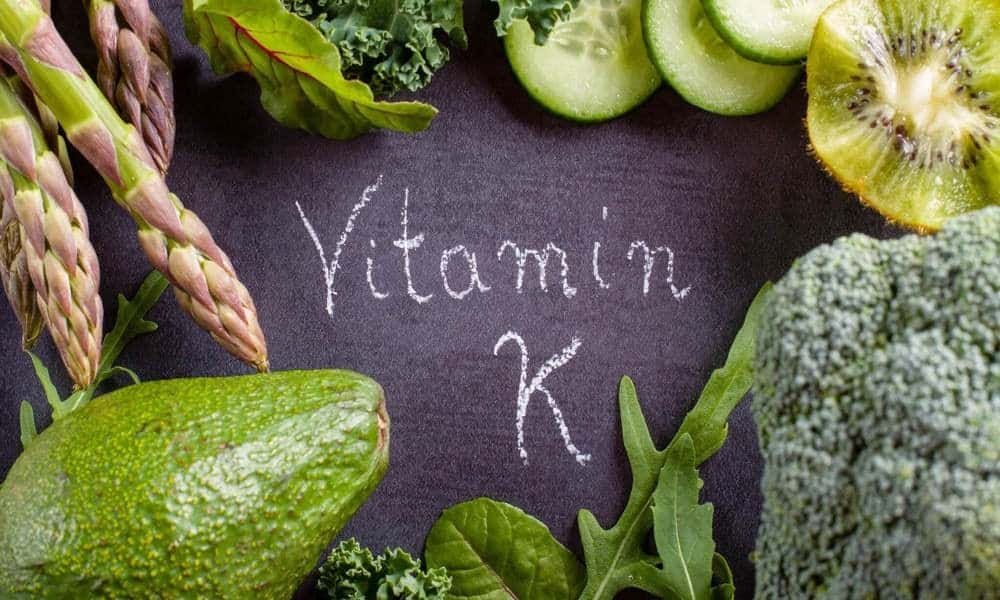 Benefits of vitamin K in your body?

Vitamin K is an important nutrient that plays a vital role in blood clotting and bone and heart health (the K comes from the Danish word “koagulation”).

What are the deficiency symptoms of inadequate Vitamin K?

Inadequate intake of vitamin K may cause bleeding, weaken your bones and potentially increase your risk of developing heart disease.

Vitamin K is sometimes given to counteract medications that thin the blood (i.e. warfarin) and to newborns to protect from life-threatening bleeding in the skull.

It’s important to note that K1 (phylloquinone) is the form found in plant foods while K2 (MK-7 or menaquinone) is found in animal foods and fermented foods.  Vitamin K2 is thought to be more important when it comes to the cardiovascular system.

Unfortunately, only Vitamin K1 is quantified in the various nutritional databases, so it’s hard to know if you’re getting enough K2 using Cronometer.  Chris Masterjohn recommends getting 100 to 200 micrograms of K2 per day and has compiled The Ultimate Vitamin K2 Resource to help you determine if you are getting enough.

People on a strict vegan diet will get plenty of K1 but less K2, while people on a carnivorous diet may get K2 but less K1.

Most people are able to convert adequate K1 to K2, however, it’s not as clear if we can convert K2 to K1.

Our satiety analysis indicates that Vitamin K from food has a mild influence on satiety.  However, this may also correspond to a nutrient-dense low-energy-density diet.

Not enough is known about deficiency symptoms to set and DRI, so the Adequate Intake is set based on the typical intake in healthy populations.

Once you have started to get the hang of nutrient density, you could ‘level up’ by working to target these stretch targets to truly optimise your nutrition.

Vitamin K works synergistically with vitamins A, B3, B6, C, calcium, E, C, D and manganese.

The nutrient fingerprint chart below shows that it is very easy to obtain adequate vitamin K1 from a nutrient-dense omnivorous diet.   Foods with more vitamin tend to have more fibre.

If you are experiencing any of the symptoms of low vitamin K1 or are concerned that your current vitamin K intake is low, then you may be interested in our lists of vitamin D-rich foods and meals.

What you will get: