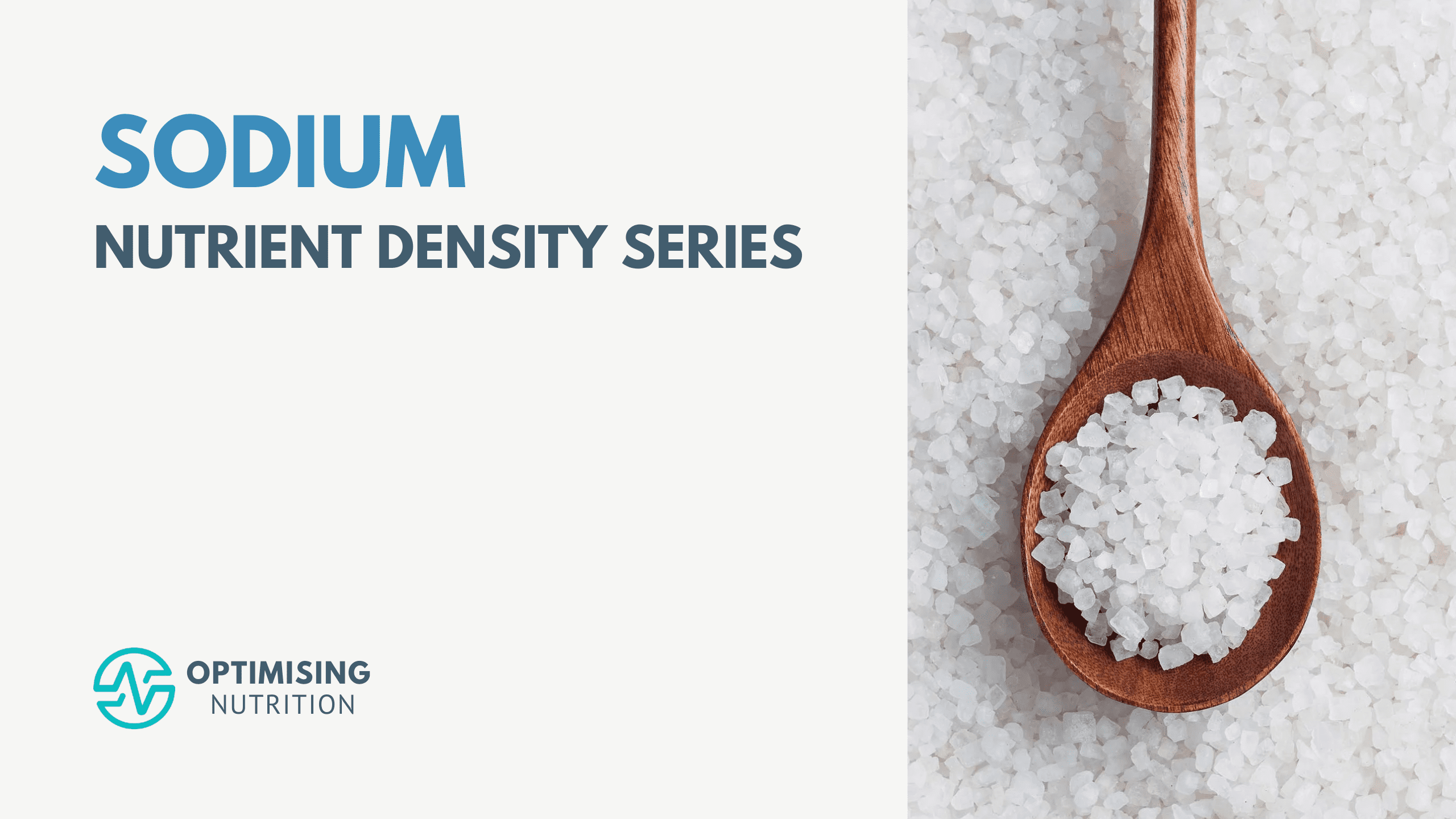 It’s not an understatement to say that sodium is essential for life.

In fact, sodium is arguably the most critical essential mineral.

While we often hear about the risks of consuming too much salt, your healthy appetite for sodium generally ensures you’re getting just the right amount you need.  Subsequently, adding ‘salt to taste’ is a good rule of thumb.

Most people will get plenty of sodium if they consume a standard diet.  However, you may need to pay more attention to your intake of electrolytes like sodium if you start to reduce processed foods in your diet.

Once we begin consuming more significant amounts of sodium, our salt appetite settles down.  Food likely tastes ‘too salty’ because we have had enough sodium.

The rate of sodium absorption is governed by the amount of salt already in your body.  When we need more sodium, it is absorbed quickly.  However, sodium will hang around for longer if we already have enough.  Therefore, your food will taste “saltier” as more remains unabsorbed on the tongue if we have already enough sodium on board.

While you will need more sodium if you are active and sweat a lot, most people will benefit by shifting their focus to other electrolytes like potassium, magnesium, and calcium before worrying about sodium.

While sodium is regularly added to foods, some nutrient-dense foods naturally contain more sodium.  If you’re wondering how to get more sodium in your diet, start with increasing your intake of foods like:

Some examples of healthy high sodium NutriBooster recipes include:

What Does Sodium Do in Your Body?

Sodium is essential for nerve conduction, muscle activation, and cell signalling.  Sodium literally transmits signals from your brain to your limbs to move you forward.

Sodium is necessary for the body to produce mucus, your first line of defence against pathogens.

Salt is critical for digestive and nervous system function.  In addition, your body requires this mineral to produce and release adequate stomach acid.

Sodium is an extracellular mineral that helps to regulate fluid balance.  For this reason, it is also crucial to manage and maintain healthy blood pressure.

The sodium-potassium pump is central to producing and moving energy throughout the body as various electrolytes maintain conductivity and work like a battery.  Without the right balance of electrolytes, your body can’t effectively use the energy from the food you eat.

Your adrenal glands upregulate aldosterone to tell your kidneys to hold onto sodium when you’re not consuming enough.  This is because the body needs salt to metabolise glucose and regulate insulin levels.  So although minimising salt is often encouraged, avoidance of salt can drive insulin resistance.

While most people grab a big glass of water when they’re thirsty, sodium also plays a significant role in keeping you hydrated.

Athletes like boxers, MMA fighters, and wrestlers trying to ‘make weight’ sometimes manipulate their sodium intake to reduce their water retention.  However, this is not a sustainable long-term weight loss strategy.  A lack of sodium can stimulate your appetite to seek more sodium and prevent fat loss.  You also won’t feel great when you are extremely water and sodium depleted!

Because sodium is so critical to fluid balance, nerve signalling, and energy production, consuming too little of this mineral can cause symptoms like:

Factors That Increase Your Demand for Sodium

Sodium demand can be increased or decreased depending on your metabolic demands, the stress your body is under, and if you’re consuming certain products.  You may need more sodium if you:

The sodium-potassium pump is central to your energy production and the movement of energy throughout the body.  Potassium depletion also induces sodium retention, which is associated with hypertension, diabetes, and heart disease.

In days gone by, salt was rare and highly valued.  We evolved mechanisms for protecting against the threat of low sodium levels, like intense cravings for this mineral to prompt us to seek it out actively.  However, we have not developed similar mechanisms to protect us against low potassium levels because it was plentiful.

Our Paleolithic hunter-gatherer ancestors are thought to have consumed about 11,000 milligrams (mg) of potassium a day from fruits, vegetables, leaves, flowers, roots, and other plant sources.  At the same time, we were estimated to have consumed less than 700 mg of sodium.  Our potassium: sodium ratio could have been as high as 10:1!

While we have intense cravings for salt, sodium could be a stop-gap measure when our body wants more potassium.  You require less sodium when you get enough potassium.

Our satiety analysis of data from Optimisers shows that people with a higher potassium: sodium ratio tend to eat fewer calories.

The average potassium:sodium ratio for Optimisers is 1.6 with the 85th percentile of 2.5.

Nutrient Optimiser algorithm sets a minimum of 1:1 sodium: potassium ratio to prevent prioritising foods and meals with more sodium until you get enough potassium.

Anecdotally, we find most people need to chase more potassium in their diet before they worry about supplementing large amounts of sodium.

Insufficient intake of electrolytes like sodium causes the infamous ‘keto flu’ that is so common in people reducing their carbohydrate intake.

Water is stored in the muscles alongside glycogen if someone is consuming carbohydrates.  For every gram of glycogen, the body retains around three to four grams of water.  When someone removes carbohydrates from their diet, the body releases this extra water and minerals along with it.

If someone is consuming unprocessed foods on their ketogenic diet, it can become harder to retain adequate amounts of sodium in their diet.

Your pancreas upregulates insulin to hold onto electrolytes such as potassium in the kidneys when you’re not getting them from your diet.  Because of this, a low-carb or keto diet can contribute to high insulin and imbalanced blood glucose if minerals are not adequately supplied.

Several minerals tend to be harder on a keto diet if it limits plant-based foods.  If you prefer a lower carb or ketogenic dietary approach, you should make an extra effort to add salt to taste and to consume naturally salty foods.

How to Get Enough Sodium on Keto

Most table salts come fortified with iodine to support thyroid health.  Instead, you may choose a natural mineral salt with some other trace minerals.  While Himalayan pink salt and Celtic sea salt contain trace amounts of other minerals, the reality is that their quantities are negligible.  Therefore, it is challenging to get substantial amounts of potassium, magnesium, or calcium from these sources without consuming high quantities of sodium.

If you want to keep your eye on potassium, a good option is to supplement with a lite salt which is a mixture of potassium and sodium.  You can either add this to food or add small amounts to your drinking water to consume throughout the day.

If you really want to level things up, you can also check out our Optimised Electrolyte Mix recipe that contains potassium, magnesium and sodium in optimal ratios.  These are all excellent ways to incorporate sodium supplementation without overdoing it.

Satiety Response to Sodium in Food

Our satiety analysis from Nutrient Optimiser users suggests that we eat less food when we have adequate sodium.  Anecdotally, many people experience less hunger when supplementing with additional minerals like sodium.

Potassium seems more important for most people because they are likely not getting enough from a conventional diet.  But, on the other hand, most people get a substantial amount of sodium if they’re consuming a highly-processed diet.  This is because large amounts of sodium are often added to processed foods to increase their palatability, driving you to eat more.

The multivariate analysis of our Optimiser data below shows that sodium has the fourth-largest impact on calorie intake and satiety of all the micronutrients.  Moving from low sodium to high sodium aligns with a 3.7% reduction in calorie intake.

How Much Sodium is Optimal?

In the past, the official recommendation has been to consume less than 1 g per day of sodium out of concerns for hypertension from excessive sodium intake.  However, the Australian target intake (not minimum) was raised to 2 g per day for adults in 2017.  It seems that the risk of high sodium may be due to the low potassium: sodium ratio rather than high sodium itself.

The charts below from the PURE study indicate that greater than 4 g of sodium is ideal for improving your risk of cardiovascular events or death from any cause.

A recent study (Sodium intake, life expectancy, and all-cause mortality) had similar findings, with higher sodium intakes aligning with better outcomes in terms of life expectancy and your risk of dying from any cause.

Based on our satiety analysis, we have set a target sodium intake of 4.0 g/day for men and 3.2 g/day for women.  However, ideally, you should focus on getting more potassium than sodium before jumping to these higher sodium intakes.

The table below shows suggested stretch targets for optimal intake compared to the average of the Optimisers, the EAR, RDI, and AI.  Once you have started to get the hang of nutrient density, you could ‘level up’ by working on hitting these stretch targets to truly optimise your nutrition.

Availability of Sodium and Correlation to Obesity

The chart below shows that dietary sodium has decreased in the food system since the 1960s.

Sodium works synergistically with vitamins B6, D, bicarbonate, calcium, magnesium, phosphate, and potassium.   For this reason, we recommend consuming nutrient-dense foods that are naturally rich in sodium to ensure you’re getting foods with a complete nutrient profile so sodium can do its job properly.

The nutrient fingerprint chart below shows that we can obtain adequate sodium from a nutrient-dense diet.

How Do I Calculate My Sodium Intake?

If you’re interested in checking if you’re getting enough (but not too much) sodium in your diet, you can check your nutrient profile using our Free 7-Day Nutrient Clarity Challenge.