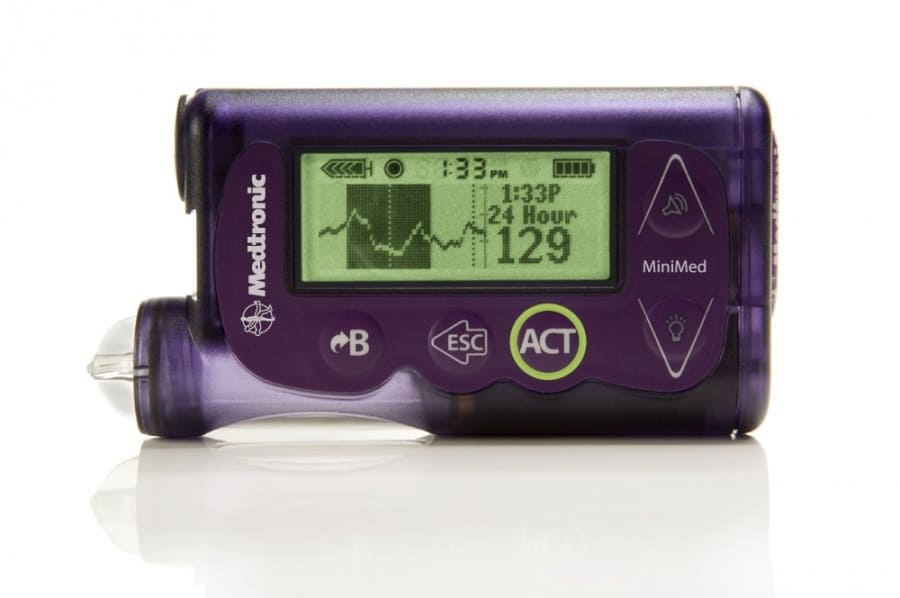 In the article Standing on the Shoulders of Giants, we met a handful of people who have achieved excellent blood sugar control in spite of having type 1 diabetes.  Common elements of their success include: Everyone’s diabetes management regimen is going to be different.  There will be a degree of trial and error to find what will work best for you.  This article reviews a number of approaches that you can learn from to see what suits you.

In the 1970s Dr Richard Bernstein got hold of a blood glucose meter (long before they were easily available) and started experimenting on himself to understand how much a certain amount of carbohydrate raised his blood glucose levels and how much insulin he required to bring his blood glucose back down. From this style of experimentation we can determine the “carbohydrate to insulin ratio” (i.e. how much insulin is required for a certain amount of carbohydrates). Carbohydrate counting is now the standard approach that most people with type 1 diabetes are taught.  This approach involves estimating the grams of carbohydrate in your food for each meal.  With this knowledge you can then program the amount of carbohydrates eaten into the insulin pump which calculates the insulin dose based on a pre-set carbohydrate to insulin ratio. The advantage of this approach is that it is relatively simple.  However it does not consider the insulin required for protein which is typically addressed with correcting doses or sometimes basal insulin. Carbohydrate counting is a good starting point, but it is by no means perfect. [1] [2]

Dr Richard Bernstein advises that his patients, in addition to restricting carbohydrates (i.e. no more than 6g of carbohydrates for breakfast, 12g for lunch and 12g dinner), to have the same meals every day which allows insulin doses to be refined to optimise for blood sugars.  If your blood glucose levels run high one day you can add a little more insulin the next day or a little less if they are running low. Bernstein also advises targeting an average blood glucose of 83mg/dL (4.6mmol/L), and that you correct if blood glucose levels go outside a ten point range from this target (i.e. 73mg/dL to 93mg/dL or 4.0mmol/L to 5.2mmol/L).  A small bolus of insulin is given to bring blood glucose levels down and a certain portion of a glucose tablet is used to bring blood sugars back up precisely. Bernstein advises that people with type 1 diabetes modulate the quantity of protein to manage their weight.  If you’re a growing child, protein is essentially unrestricted.  If you’re trying to lose weight protein can be reduced to further reduce insulin. Bernstein says that protein requires about half as much insulin as carbohydrates and outlines how to dose for it in this video from Dr Bernstein’s Diabetes University.  In practice, though, his approach to dosing for protein requires consistent meals and fine tuning of insulin dose.

Another popular method is ‘sugar surfing‘ which is effectively a ‘bolt-on’ to carbohydrate counting developed by Dr Stephen Ponder to manage the glucose response to things other than carbohydrates. This approach involves dosing for carbohydrates with the meal, and then watching the continuous glucose monitor (CGM) and giving regular ‘micro doses’ of insulin to keep blood sugar under around 93mmol/L (5.2mmol/L).  Typically two or three separate doses will be required to bring a ‘protein spike’ under control for someone with type 1 diabetes. Injected insulin works over a period of up to eight hours and it is difficult to match the timing of the insulin action with digestion.  The advantages of this approach are that it allows for the variability in the time of protein digestion which varies from person to person and is different for different foods and hence difficult to predict accurately. 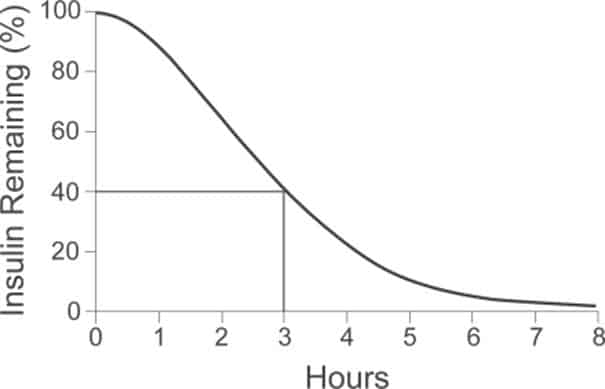 I think the secret to making ‘sugar surfing’ work is to turn the waves that you’re surfing into more manageable ripples by following a diet with a reduced insulin load.

“It is possible that other methods of matching insulin with food are not being studied because of the belief that carbohydrate counting is a well-founded, evidence-based therapy,” the researchers concluded. “Indeed, this meta-analysis shows the scarcity of high-level evidence.” [3]

One of the experiments documented in Clinical Application of the Food Insulin Index to Diabetes Mellitus (Bell, 2014) [4] demonstrated that type 1 diabetics calculating their insulin requirement using the food insulin index approach achieved significantly improved blood glucose control compared with those using standard carbohydrate counting. Estimating the insulin required for the meal from carbohydrate and protein rather than carbohydrate alone is potentially a massive step forward in improving blood sugar control for people with type 1 diabetes. The limitation of using the approach practiced in the study is that the food selection tested is limited to the one hundred or so popular processed supermarket foods. If you’ve read my blog you’ll know that I’ve tried to develop a robust method for calculating the insulin requirement for foods based on their macronutrients without having to test them in vivo (i.e. in real, living people). [5] [6] [7]  The chart below shows how we can use the food insulin index test data to more accurately predict the insulin demand of a particular food using this formula. 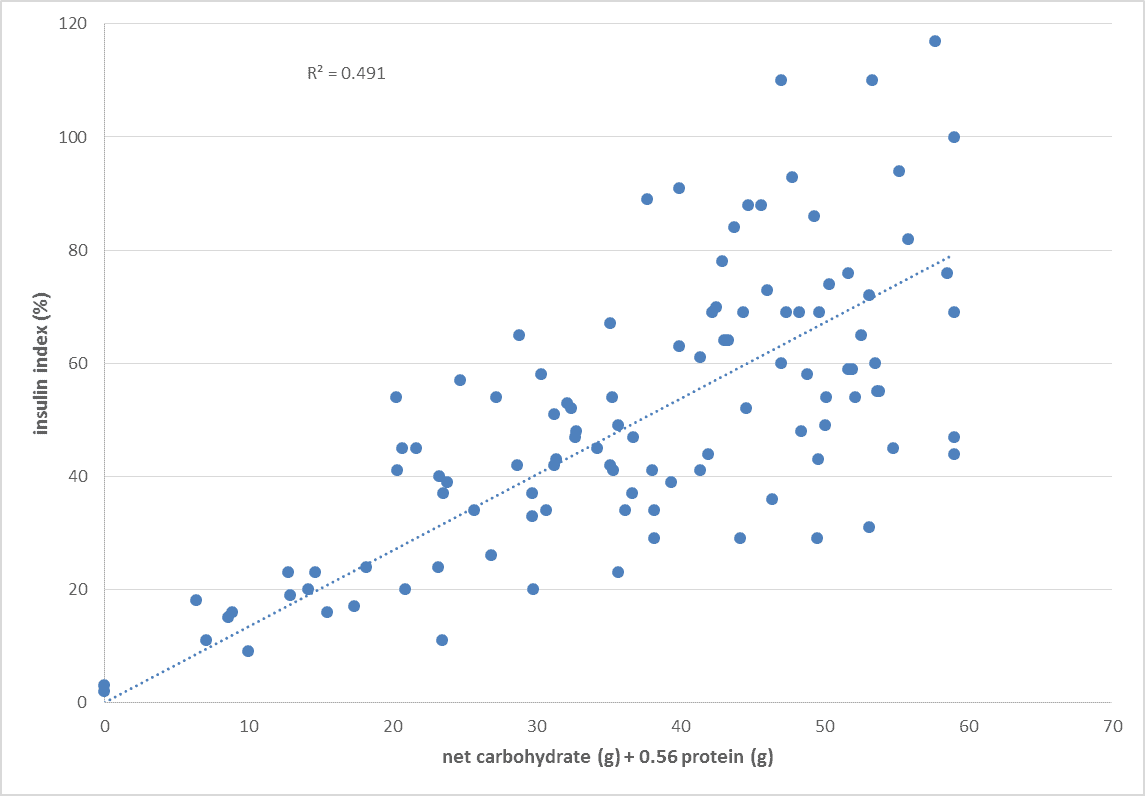 Rather than separating doses for carbohydrates and protein, the food insulin index approach assumes that all of the insulin is given with the meal.  The risk with this is that the insulin will take action before the protein digests which will lead to low blood glucose.

The TAG (Total Available Glucose) approach is based on a book by Mary Joan Oexmann published in 1989. [8]  This method calculates the insulin required for carbohydrate, protein (54% of carbohydrate) and fat (10% of carbohydrate). If we gave all the insulin calculated for both carbohydrates and protein when we sat down to eat a high protein meal it is possible that the insulin would take effect before the protein digested, leading to low blood glucose before the gluconeogenesis from the protein had time to kick in. To deal with the fact that glucose from protein can take longer to show up in the blood stream people who follow the TAG approach typically use a ‘dual wave bolus’.  The insulin for the carbohydrates is dosed with the meal, while the insulin for the protein is infused slowly as a separate “square wave bolus” over a period of three hours or so.  The need for the carbohydrate and protein boluses to be split will depend on the amount of protein in your meal and how quickly protein raises your blood sugars. 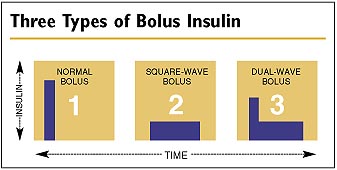 separate boluses for carbohydrates and protein

A few people who achieve excellent blood sugar control simply use two separate boluses – one for carbohydrates before the meal with another one for protein around an hour after the meal. This approach requires that the insulin for the protein and carbohydrate are calculated separately with the protein bolus being given a number of hours after the meal. This approach can be refined using a CGM to confirm when the blood sugar response to the protein kicks in and hence when the bolus for protein is required.

To assist in calculating the bolus for carbohydrates and protein Ted Naiman of Burn Fat Not Sugar has created this insulin calculator. You can run it on your computer or phone, enter the properties of the food that you are about to eat and it will calculate the appropriate dose for carbohydrate and protein.  The outputs from this calculator will give you all the required data to follow any of the insulin dosing strategies above. People who have used it so far have found it beneficial. 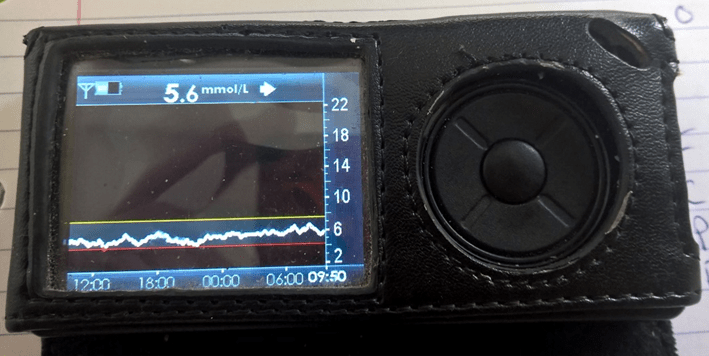 An example screen grab from the calculator is shown below with the explanation of inputs and outputs following. 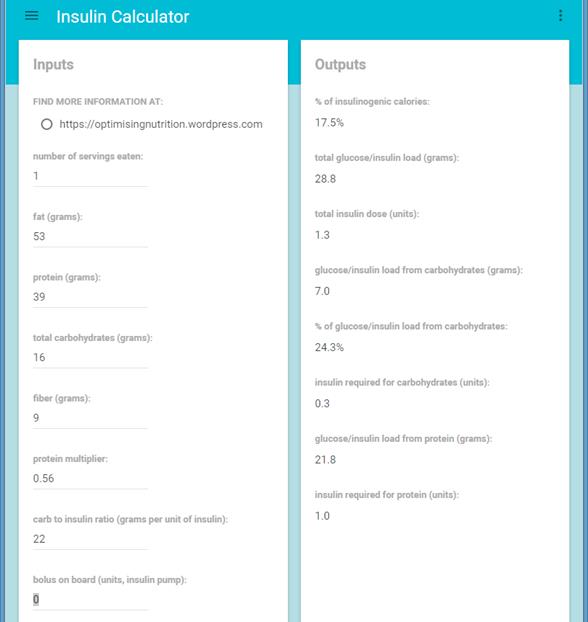 If you are following the meals from the blog you will notice that the net carbs, total insulin load and percentage of insulin for carbohydrates have been included in a table at the end of each recipe assuming a standardised 500 calorie meal.

Moni has experimented with dosing separately for the protein component of the meal, however it typically turns out that her blood glucose has risen by the time she doses for the protein.  It seems that for her, the glucose from the protein (via gluconeogenesis) hits her bloodstream quickly and hence delaying the dose for protein is not appropriate for her. We are also trying to focus on a handful of nutrient dense meals with pre-determined insulin doses.  The table below shows the insulin required for a 500 calorie serving for a range of meals.  All of these have limited carbohydrates and the insulin dose for the protein is greater than the carbohydrate dose.  I have provided hyperlinks to some of the meals that are already published on the blog. If you can’t handle the thought of weighing and measuring and then calculating the insulin dose for everything you eat, as a ‘rule of thumb’ all of these meals require dosing as if they were about 20 to 25 grams of carbs.  If you are choosing meals with a low insulin load then the insulin dosing for food ends up representing only about 20% of the daily dose. For us, this approach combines a number of aspects from the various approaches discussed above: We’re all on a journey.  I hope this helps you move towards finding a strategy that is optimal for you.