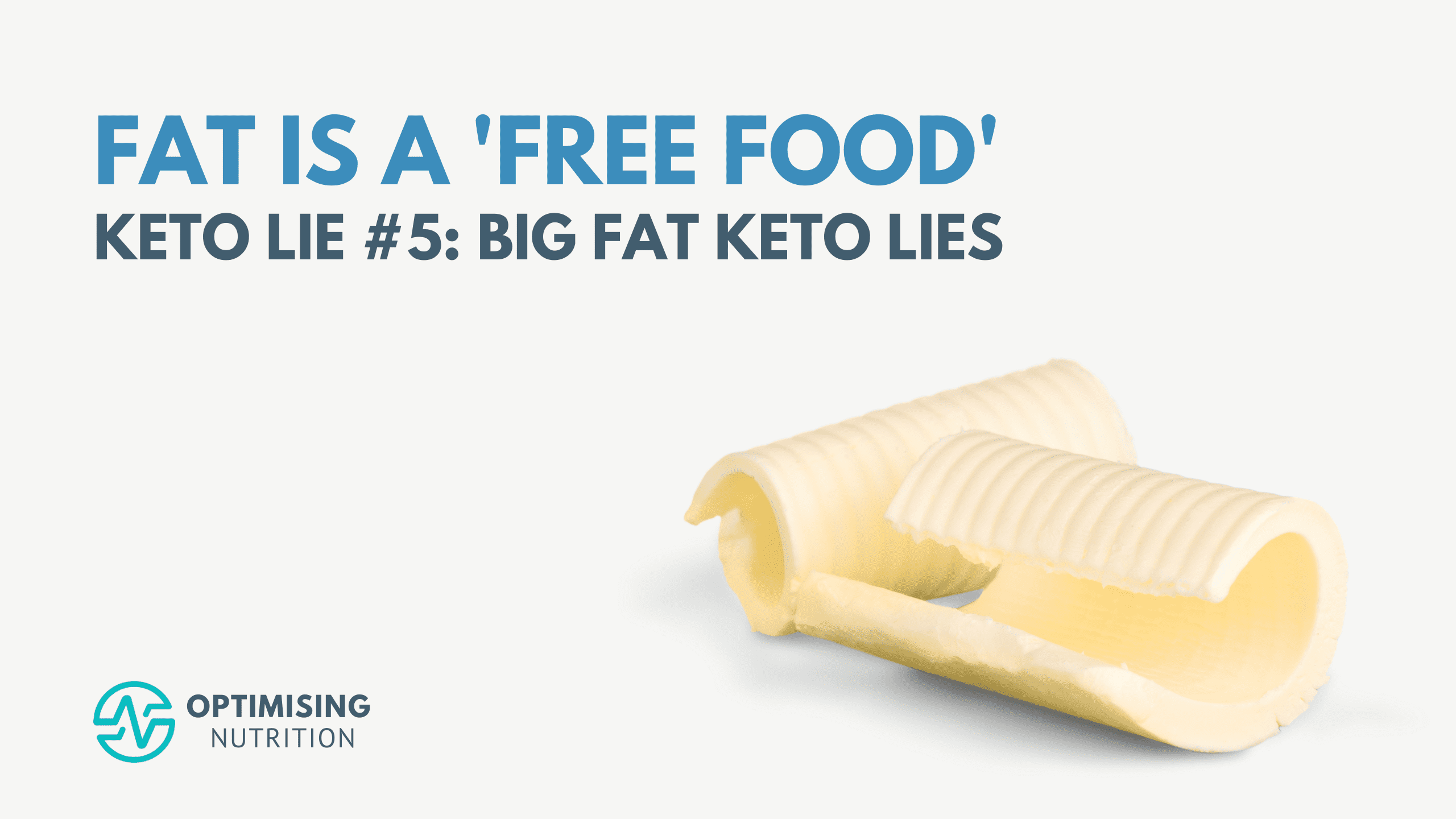 This is one of the cornerstone beliefs of many low-carb and keto diet subscribers.

Thus, dietary fat should be the primary energy source because it doesn’t impact blood sugar or insulin levels and is effectively a ‘free food’.

Will Insulin Make You Fat?

Dr David Ludwig states that ‘insulin is like Miracle-Gro for your fat cells’.  Dr Jason Fung says, ‘I can make you fat. I can make anybody fat. I just need to give you enough insulin’.

This theory is partially correct. If someone injects excessive amounts of exogenous insulin, their liver will hold their stored energy back, and the energy in their bloodstream will decrease.  They will soon become extremely hungry, compelling them to eat more. As a result, they will eat an excessive amount of food and gain fat.

However, this ‘fun fact’ is utterly irrelevant for the 99.985% of the population with a working pancreas.

Unless you are injecting insulin to manage Type-1 Diabetes or advanced Type-2 Diabetes, this is entirely irrelevant! It would be illegal for someone to jab you with a needle and inject you with insulin throughout the day. They would be deemed a dangerous public nuisance and locked up.

On another note, your body is super-efficient. It does not produce more of anything than it needs.  When consuming food, your pancreas will not release more insulin than it requires to keep your stowed energy in storage.

As shown in the chart below, total insulin demand across the day is positively correlated with your body mass index (BMI). While correlation does not necessarily mean causation, it appears that your insulin requirement throughout the day is driven by the amount of stored energy your body is holding.

For a more detailed discussion of this topic, see What Does Insulin Do in Your Body?

People with Type-1 Diabetes know they must use basal insulin to keep their blood sugars stable when they don’t eat and bolus insulin to compensate for their food and meals.

Unless you let your blood sugars run high by switching off your insulin pump or choosing not to take your injections, the only way to reduce the insulin produced by your pancreas is to focus on eating high-satiety foods.  This will allow you to consume less energy without having to exert unsustainable levels of willpower.

It is true that your pancreas produces more insulin acutely in response to carbohydrates, followed by protein and then fat.  Note:  Fructose and fibre tend to have lower insulin demand relative to carbohydrates.

The data from Food Insulin Index testing suggests that fat has about 10% of the insulin response that carbs do. However, it’s critical to keep in mind these insulin tests only look at the first two hours after eating.

To illustrate, the chart below shows how different macronutrient ratios elicit different blood sugar responses by comparing a 75% carbohydrate plant-based low-fat (PBLF) diet (green line) vs a 75% fat animal-based low-carb (ABLC) diet (red line).  Blood glucose rises quickly in response to low-fat foods, whereas it increases slowly from low-carb foods.  However, blood sugars for both extremes are still elevated above the baseline after two hours.

After watching Moni’s closed-loop pump system for years, I know anecdotally that a large steak will require continual insulin for up to 10 hours as it’s digested and metabolised.  But if she ever happens to eat something that combines carbs and fat, her insulin requirements will be elevated for more than a day, and she will need more insulin to keep her blood sugars suppressed.

A lot is going on beyond the two hours we have measurements for.  Hence, we can’t assume that there is a negligible insulin response to high-fat foods.

A little-known fact when it comes to nutrition and metabolism is that the order your body burns the various fuels in your body and the amount of insulin released is proportional to the capacity your body has to store each of them.

We have minimal capacity to store alcohol, ketones, and any protein in excess of what you require for muscle synthesis and other critical bodily functions.  Your body raises insulin to abruptly shut off the release of stored energy until it utilises these fuels.

Your body has some capacity to store glucose, but not a lot.  Thus, we see an aggressive insulin response to carbohydrates.  However, your body is more than happy to hold fat in your adipose tissue (i.e. on your butt, tummy, or muffin top), which is why the insulin response for fat is less acute.

Because fat is less volatile and has a lower thermic effect relative to other fuels, it is much easier to store.  While protein and carbs are difficult to convert to fat for storage, it’s super easier for the body to store dietary fat as body fat. Thus, any fat that’s left over once you’ve burned through any alcohol, carbs, or excess protein is easily stored as body fat.

The chart below shows a figure that we use in Data-Driven Fasting to explain the interconnected fuel tanks in our bodies.  Most of us have our blood glucose and liver glycogen tanks filled to the brim.  Your pancreas is working overtime to keep insulin elevated to hold back the fat in storage while burning off the more volatile glucose in your blood.

The insulin response to carbohydrates is acute simply because you don’t have much room to store glucose in your body.  Conversely, the body has a smaller and slower response to fat simply because it has plenty of capacity to store it in large quantities.

However, once we drain our glucose, by waiting a little longer between meals, your body lowers insulin to allow the stored glycogen in your liver to be released into the bloodstream.

Once your liver glycogen is depleted, so long as you are not overdoing the dietary fat, your body will reduce insulin further to allow your stored body fat to be used, which is what most of us are chasing in the long run.

For more details on this concept, see Oxidative Priority: The Key to Unlocking Your Body Fat Stores.

You Can’t Turn Off Your Insulin!

Some people with Type-1 Diabetes partake in a dangerous practice called diabulimia which involves intentionally underdosing their insulin so blood sugars run high and they can lose weight.

Their stored energy rapidly flows into their bloodstream, leading to dangerously high blood sugars, ketones, and free fatty acids in the blood. The potentially life-threatening state known as Diabetic Ketoacidosis and horrific levels of muscle wastage can also result.

When my wife Monica was first diagnosed with Type-1 Diabetes, she was losing 0.5 kg per day!  She would have wasted away and died in just a few days without exogenous insulin.

I’m explaining this horrific process because this is what people who believe in the Carbohydrate-Insulin Hypothesis think will happen to them when they reduce dietary carbohydrates.  But this is not the case, and they don’t understand what they are hoping for.  Uncontrolled Type-1 Diabetes is a truly terrible disease, and you can’t bring it upon yourself by simply avoiding carbs and protein!

To understand how much insulin is required for different macronutrients in the fullness of time, I would love to see an experiment done where a large number of people with Type-1 Diabetes following both high- and low-carb diets track their food meticulously and correlate their total daily dose of insulin with their calorie, protein, fat and carbohydrate intake.  Until we have the results of such a study, we won’t know how much insulin is precisely required throughout the day for different macronutrients.

What we do know is that:

How to Reduce Your Insulin Levels Across the Day

While we don’t have data showing the long-term responses to different macronutrients, I do have Monica’s total daily insulin dosage data from the past ten years.

The chart below shows Monica’s insulin dose in the period leading up to and during the first Macros Masterclass that we did together. As you can see, her daily insulin demand dropped from the high twenties to the teens.

To be clear, Type-1 Diabetes cannot be cured or reversed.  Monica’s pancreas still produces no insulin. However, the insulin she requires was vastly reduced by optimising her food choices and reducing her body fat levels.

During the Masterclass, Monica lost 7.5 kg (16.5 lbs) or 10.7% of her body weight during the six-week challenge. These photos show us both before and after those six weeks.

The main difference from Monica’s previous diet was a reduced intake of nuts, cheese, and cream which are helpful foods to stabilise blood sugars.  However, they are not ideal for fat loss or reducing insulin throughout the day.

Although high-fat foods elicit a slower and more stable insulin response, they still affect insulin requirements across the whole day. While low-carb foods like nuts, cheese, and cream are excellent foods for people managing diabetes to obtain adequate energy and maintain stable blood sugars, they also appear to trigger a long-term insulin response and prevent blood sugar levels from dropping below the threshold that fat burning starts.

Reducing those foods improves satiety, reduces overall energy intake, which lowers insulin across the day and allows body fat to be used.

Anecdotally, others with Type-1 Diabetes have shared that their daily insulin requirements dramatically increased, and their insulin sensitivity dropped when they jumped on the high-fat keto trend.  Allison Herschede, a co-founder of the Type 1 Grit Facebook Group, found her total daily dose of insulin doubled on a 90% fat keto-style diet.

Her HbA1c went up to 8% during her high-fat keto experimentation. Thankfully, it has now returned to 4.8% after following our nutrient-dense, high-satiety meals.

Focusing on nutrient-dense, high-satiety foods tends to reduce overall insulin requirements across the day and not just immediately after meals.

By focusing on nutrient density, you are also able to get the nutrients you need with fewer calories and improve satiety!

What is Really Happening?

driving obesity, it appears to be fuelled by:

Although it is only symptom management, reducing the processed carbs in your diet will help stabilise your blood sugars. However, if you want to lower your insulin requirements, reverse Type-2 Diabetes, and attack energy toxicity—the root cause of most of metabolic diseases—you should prioritise nutrient-dense, high-satiety foods and meals that allow you to reduce your insulin levels throughout the whole day.

The real solution to managing Type-2 Diabetes, blood sugar, insulin levels and avoiding the myriad complications of metabolic syndrome is:

What the experts are saying a