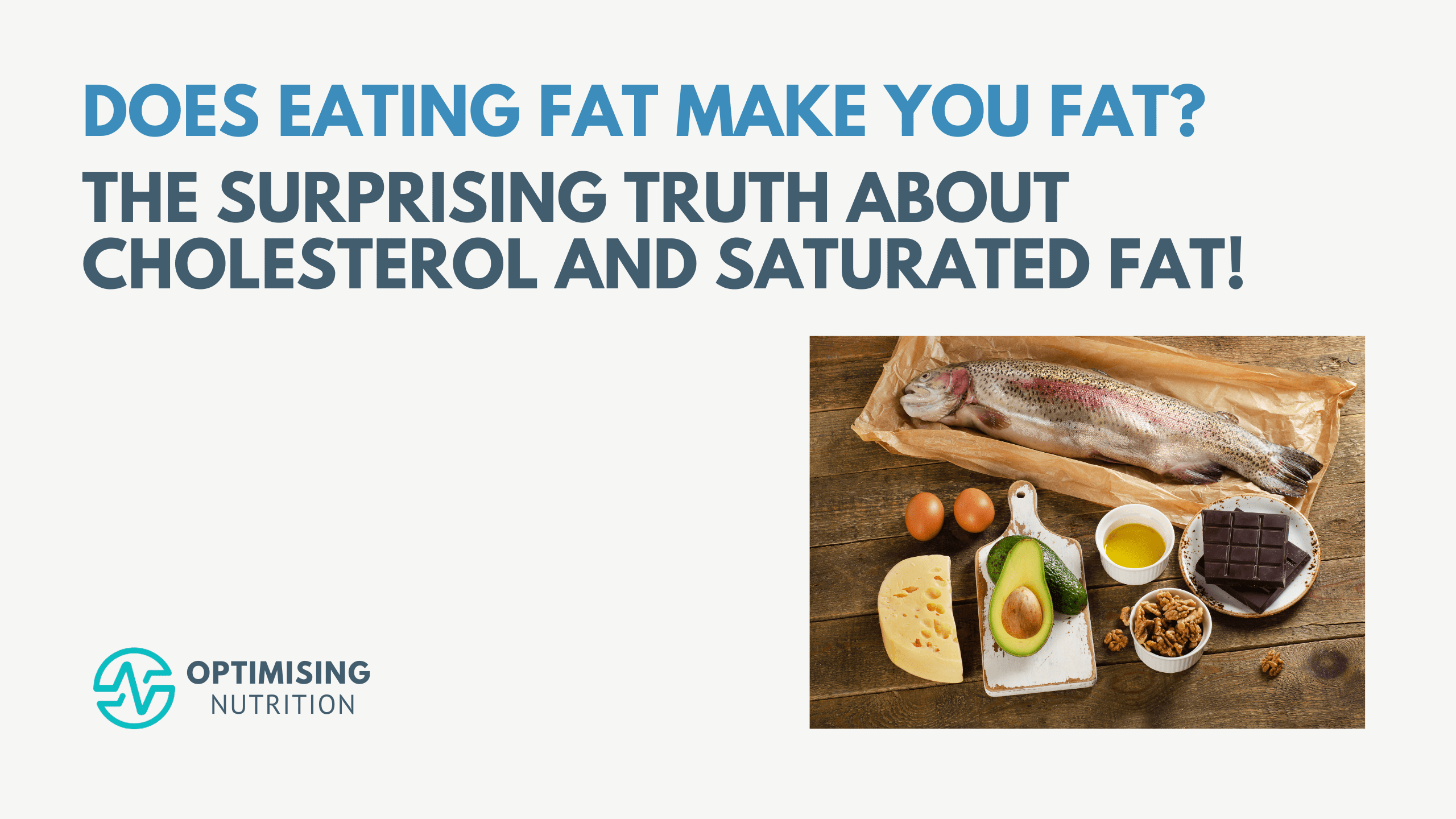 Does eating fat make you fat?

Which fats do you need more or less of?

Which ones will drive you to eat more and just end up on your belly and bum?

Is there such a thing as “good fats” vs “bad fats”?

This article will bring you data-driven answers to these frequently asked questions based on our analysis of 125,761 days of food logs from 34,519 Optimisers.

We’ll drill down into satiety response to the various fatty acids to understand which ones you need to prioritise vs which ones will drive you to eat more than you need to.

Does Eating Fat Make You Fat?

In the chart below, we have broken up the data from our Optimisers into various buckets based on the percentage of energy from fat in their diet to calculate fat % vs average calories.

The data analysis indicates that consuming more than 35% of your calories from fat aligns with higher energy consumption.  Moving from 85% to 35% fat aligns with a 34% reduction in calories.

However, it’s interesting to note that the Acceptable Macronutrient Distribution Range for fat of 20 – 35% is on the lower end of the satiety curve.  So, you don’t necessarily have to go low fat to achieve satiety.

For comparison, the chart below shows the distribution of fat % of our Optimisers, with an average fat intake of 47%.

So, yes, eating fat will make you fat.

But fat is not necessarily a better or worse energy source than carbohydrates.  They’re both simply carbon-carbon bonds that your body uses to create energy (ATP) in your body.

But at nine calories per gram, fat tends to be the easiest macronutrient to leverage for more or less energy.

If your goal is to lose body fat as quickly as possible, you may want to dial your dietary fat down to 35%.  However, if you’re happy with your weight and prefer a lower carb diet, your fat intake will be higher.

As shown in the chart below, reducing non-fibre carbs from 45% to 15% and reducing fat from 80% to 35% have similar impacts on overall calorie intake.

Many people noticed the increase in carbohydrate consumption between the 1960s and 2000 correlated with obesity and pointed the figure at carbs as the culprit.  However, the reality is that our fat intake has been steadily rising for the past century.

So, while carbohydrates dropped and have risen to about the same level as a century ago, our fat intake has increased by approximately 750 calories per person per day (mainly from the addition of industrial seed oils to our food system)!

Then when we look at the long-term trends in fat intake, we see that the availability of fat, mainly from industrial seed oils like palm, canola, soy and rapeseed, has been on the rise for the past century!

The chart below shows the relationship between fat and diet quality.  Because protein comes with energy from fat and many vital nutrients, minimising fat is not necessarily optimal.

For comparison, optimal diet quality aligns with 10 to 20% carbohydrates.  So, if you’re like most people who consume a similar blend of fat and carbs together with lower protein, you can choose to reduce your energy from carbs and/or fat to increase satiety and nutrient density.

Some people prefer unsaturated fats (mainly from plants) and shun animal-based saturated fat.  Meanwhile, others prefer saturated fat and avoid seed oils.  However, as shown in the image below, nearly all foods contain a blend of the different types of fatty acids.  So, it’s impossible to completely avoid one type of fat.

In the following sections, we’ll show you which types of fat align with greater satiety and a lower energy intake and which ones align with simply eating a lot more.  This will empower you to understand which fats you can prioritise and which ones to avoid to achieve your desired results.

Omega 3 is an essential fatty acid, meaning we can’t make it.  So, we have to get it from the food we eat.

As shown in the satiety response curve below, we tend to eat 10% fewer calories when our diet has more omega-3 per calorie.  Based on this analysis, we have set a stretch target (or Optimal Nutrient Intake) of 6.0 g/2000 calories for omega 3.  This is more than five times the Dietary Reference Intake and twice the average intake of our Optimisers.

While plant-based foods contain omega-3 as alpha-linolenic acid (ALA), humans are not good at converting it to bioactive forms (i.e., DHA and EPA).  Therefore, consuming fatty fish and other seafood gives us a better chance of absorbing it.

Before you reach for the supplement bottle, keep in mind that while omega 3 is essential, you’re unlikely to get all the satiety and health benefits from supplements.  In addition, foods that are high in omega-3 provide many other beneficial nutrients, so you should do everything you can to meet your omega-3 target from the food you eat.

Some examples of popular omega-3-rich foods include:

For more on omega 3, check out Omega 3 Rich Foods and Recipes: A Practical Guide.

It was believed that dietary cholesterol contributes to cholesterol in the blood, which was associated with heart disease.  On this basis, the American Heart Association set a limit on cholesterol of 300 mg per day, and since the 1950s, the US population dutifully reduced their intake of dietary cholesterol.  But the reality is that we need cholesterol to build our cell membranes, make hormones and produce bile acids.

The chart below from the USDA Economic Research Service shows that the availability of cholesterol in the food system has declined since the 1950s.  However, it doesn’t appear that the reduction in cholesterol has helped slow the obesity epidemic.

Interestingly, our satiety analysis shows that foods with more cholesterol tend to be more satiating.  We tend to consume 39% fewer calories when we consume foods that contain more cholesterol per calorie!   Our multivariate analysis also shows a statistically significant satiety response once all the other essential nutrients, even protein, are considered.

Concerningly, the lower limit targeted by the American Heart Association and the Dietary Guidelines aligns with the lowest satiety response!

There’s no need to go out of your way to drink butter or coconut oil which are not nutrient-dense.  However, there is no need to avoid foods like eggs, liver and seafood that contain cholesterol in a matrix of many other beneficial nutrients.

Some popular foods that contain more cholesterol are listed below.

For more on cholesterol, see Cholesterol: When to Worry and What to Do About It.

Saturated fat is another fat that the dietary guidelines have shunned.  But you may not be aware that our saturated fat consumption has declined since the 1930s, dropping from 42% to 31% of all fat consumed.

When it comes to saturated fat, our satiety analysis shows an interesting story.

Some examples of popular foods that contain more saturated fat include:

While you probably don’t need to prioritise saturated fats by going out of your way to add butter and coconut oil to everything (especially if your goal is weight loss), this data indicates that there is no need to actively avoid nutritious foods that contain saturated fat (e.g., eggs, cheese and meat).

The chart below shows the change in calories from varying types of fat over the past century.  Also plotted are the US obesity rates, which have tracked eerily close to the extra calories from monounsaturated and polyunsaturated fats.

The following chart shows how the percentage of our total energy from polyunsaturated and monounsaturated fats has steadily risen, while saturated fat rose until the 1960s and fell.

By now, you’re probably wondering where all this extra fat has come from!

The chart below gives us a clue, showing the production of vegetable oil, mainly from palm, soybean, sunflower and rapeseed, has increased eightfold over the past half-century!

Omega 6 fatty acids are a type of polyunsaturated fat that is found mainly in vegetable oils as well as nuts and seeds.  While we require some omega 6 fats in our diet, our satiety analysis indicates that more omega 6 aligns with a higher calorie intake.

In several other articles, we have noted how we tend to consume the most energy when our diet consists of a similar mixture of carbohydrates and fat.  Interestingly, we tend to see a similar trend when it comes to mixing different types of fats.

As shown below, it seems we eat the most when our diet has a 3:1 omega 6:3 ratio.  Towards the left of this chart, we can see that minimising omega-6 while prioritising omega-3 aligns with the lowest calorie intake.

However, in practice, it’s not easy to maintain a low omega 6:3 ratio.  Our modern diet is now heavily dominated by omega-6 fats, and omega-3 is much harder to come by.

The chart below shows the distribution of omega 6:3 in our optimiser data, with only 35% below 3:1.

In minimally processed foods, saturated fats are more prevalent in animal-sourced foods that would have been consumed in winter when plants were less abundant.  Meanwhile, unsaturated fats are more prevalent in plant-based foods, which would have been consumed more in summer.   However, modern food processing enables us to bring these fats together in a way that appears to uniquely stimulate our appetite.

Trans fats are another controversial fat (even more than cholesterol).  The mainstream recommendation is to limit trans fats to less than 1% of your energy intake.

However, as shown in the satiety response chart below, Optimisers tend to eat less when their diet contains more energy from trans fats.

Industrial trans fats are high in partially hydrogenated vegetable fats (e.g., deep-fried foods and baked foods like biscuits, cakes, pastries and buns).  But if you are minimising processed foods, you will keep your intake of industrially-produced trans fats to a minimum.  Likewise, naturally occurring trans fats should not be a concern when focusing on nutrient-dense foods.

Foods that contain trans fats that should be avoided include:

Popular foods that contain more naturally occurring trans fats that you don’t need to be so concerned about include:

To help you make sense of this analysis, the table below shows the various parameters sorted by the satiety response discussed in this article.  For reference, we’ve also included the average intake of our Optimiser data along with a stretch target which is based on the 15th percentile Optimiser intake.

Reducing your fat intake has the biggest impact on satiety, while at the bottom of the table, we see that prioritising food that naturally contains more cholesterol and a lower omega 6:3 ratio aligns with the maximum reduction in calories.

However, it’s unlikely that most people will want to (or be able to) micromanage their diet to this extent.  Simply prioritising nutrient-dense food that contains all the foods that contain more essential nutrients like omega 3 without excess energy from fat or carbs will be plenty.