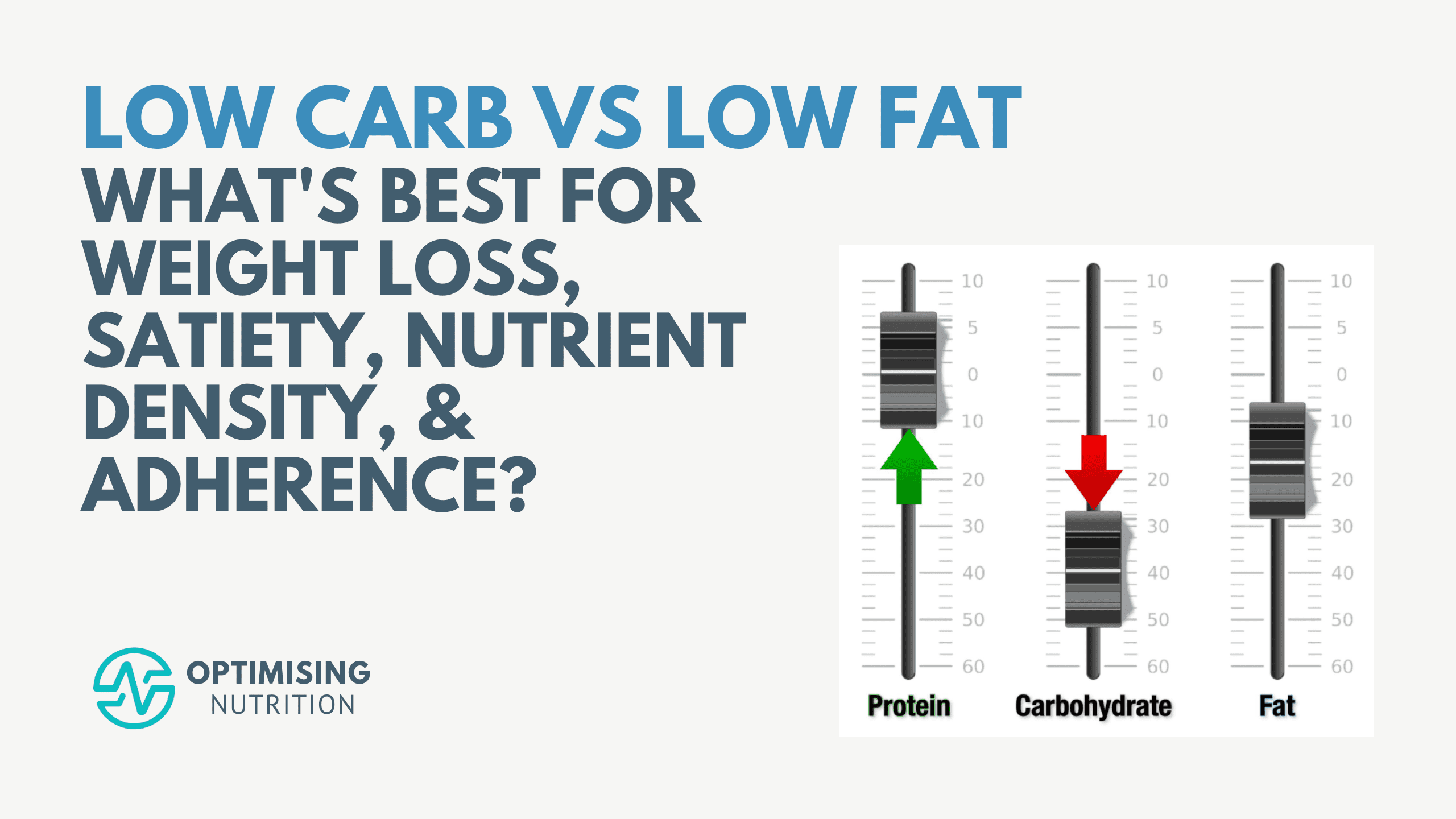 Over the past half-century, the official medical recommendation for weight loss has been a low-fat diet.

Most dietary guidelines tend to echo this sentiment and recommend reducing fat.  For example, the 2020-2025 Dietary Guidelines for Americans recommend a meagre 20-35% of your calories from fat.

But in recent years, there has been a resurgence in diets at the other end of the spectrum considered ‘lower-carbohydrate’.  From Atkins in the 1970s to the popular keto diet in recent years, ‘high-fat’ seems to be the new ‘no-fat/low-fat’.  Low-carb and keto proponents will tell you that low-carb was the default before modern agriculture and that the low-fat diet is the dietary fad.

So, is the low-fat or low-carb extreme better than the other?

In this article, we’ll  bring some data-driven clarity to the low-carb vs low-fat argument using our analysis of one hundred and fifty thousand days of food logging from forty thousand people to see which extreme wins in terms of:

The information in this article will empower you to identify your ideal balance of fat vs carbs that aligns with your goals and preferences without swinging to unproductive and unsustainable extremes.

The chart below was taken from our satiety analysis.  Here, we can see that a lower percentage of total calories from fat aligns with a decreased calorie intake.  Optimisers who consume a very low-fat diet tend to consume 37% fewer calories than those on a very high-fat diet.

At this point, the low-fat diet is looking favourable!  However, the story gets a little more interesting when we look at our satiety response to carbohydrates.

The chart below shows we eat the most when our diet contains around 45% non-fibre carbohydrates, and most of the rest of our energy comes from fat.  However, we see a 23% reduction in calories when we lower our consumption of non-fibre carbs to 10-20%.

The satiety response to carbs gets even more fascinating.

The following chart shows the satiety response to fat vs carbs together.  As you can see, reducing fat has the most significant impact on your overall calorie intake.  However, moving from a moderate to lower carbohydrate intake can also help with satiety.

That said, many people get into trouble when they swing from one extreme to another and simply swap carbs for fat.

So, what do we eat if we can’t swap fat for carbs (or vice versa)?

The following chart, which includes protein and fibre, gives us a clue.

While this may motivate you to jump from low to high protein overnight, it might not be the best solution if your goal is weight loss.  Instead, it’s ideal to understand how you’re currently eating so you can use that information to progressively dial back your fat and (or) carb intakes while prioritising protein.

Unfortunately, nutrition can sometimes be confusing.  While we like to think in terms of carbs vs fat or low vs high, the reality is that lowering carbs or fat will impact the other variables, including protein.  To illustrate, the chart below shows non-fibre carbs vs fat vs protein from our Optimiser data.  Each dot on the chart represents a day of food logging.

The next version of this chart shows carbs vs fat vs calorie intake for each of the points.

In our Macros Masterclass, we guide our Optimisers through dialling back their carbohydrate intake if their blood sugars rise by more than 30 mg/dL (1.6 mmol/L) after they eat.  This indicates they’re overfilling their glucose fuel tank, and their body needs fewer carbs.

Once someone has stabilised their blood sugars—but not necessarily flatline—we can focus on reducing dietary fat so someone can use their body fat.

Is Low-Carb or Low-Fat More Nutritious?

When it comes to nutrient density, we see that a lower-fat diet tends to align with a higher Diet Quality Score.

As the micronutrient fingerprint chart below shows, getting adequate amounts of essential nutrients like vitamin C, vitamin K1, and niacin on a very high-fat diet can be challenging.

But interestingly, a lower-carb diet also aligns with a greater nutrient density.

When we plot the nutrient densities of all three macros together (i.e., the number of nutrients per calorie), we see that protein dominates.  Thus, increasing the protein % of your diet to about 50% of total calories will help you get more of all the essential nutrients.

The chart below shows the carbs vs fat vs diet quality.  Again, we can see that reducing carbohydrates or fat can lead to a higher diet quality score, so long as we don’t simply swap carbs for fat.  Instead, to increase nutrient density and satiety, we need to swap energy from carbs and fat for protein and fibre.

Is a Low-Carb or Low-Fat Diet Harder to Maintain?

One common lower-carb diet critique is that it’s hard to maintain.  You may be interested that the average Optimiser’s carbohydrate intake is only 17%.  People focused on getting adequate protein and nutrients tend to gravitate towards a lower-carb diet naturally.

Although a higher-carb diet tends to be the most popular approach, many people successfully maintain a lower-carb diet, particularly if they are motivated to manage their diabetes and stabilise their blood glucose levels.

Meanwhile, the average Optimiser’s fat intake is 46%.  Because protein usually comes packaged with some fat, it’s hard to reduce fat too much if you’re consuming adequate protein.

For reference, the average protein % of our Optimisers is 32%.  However, there is a wide distribution of protein intakes, and our Optimisers eat anywhere from less than 10% to more than 60% of their total calories from protein.

But ultimately, it doesn’t matter if you prefer a low-carb or low-fat diet.  So long as you get the protein and other nutrients your body requires without excess energy from carbs or fat, you aren’t bound to any one dietary avenue.

Changes in Fat and Carbohydrates Over Time

Finally, let’s examine how our carb and fat intakes have changed over time.  An influx of carbs and fat has contributed to the massive increase in energy intake and obesity rates over the past half-century.

If we look at the changes in our diet since 1980, we can see a pronounced increase in carbohydrate intake until artificial sweeteners like Splenda were approved for widespread use around 1999.

Around this time, high-fructose corn syrup (HFCS) became unpopular amongst consumers due to its links to the diabesity epidemic.  Innovative food manufacturers replaced HFCS with cheap and palatable ‘heart healthy’ seed oils and artificial sweeteners, flavours, and colours to create modern ultra-processed foods.  As a result, our intake of high-calorie, low-satiety fats spiked, our carb intake decreased, and the obesity epidemic powered on.

Looking back over the past century, we see that our intake of both carbs and fat have increased since the agricultural revolution of the 1960s.  Unfortunately, this added more empty calories to the food system.

Interestingly, the United States’s carbohydrate intake fell in the first part of the last century but has since risen to similar levels consumed 100 years ago.  However, our fat intake has increased simultaneously by a whopping 800 hundred calories per person per day!

Increased food processing has made our diet a similar mix of fat and carbohydrates.  This hyper-palatable combination is poorly satiating and might have you feeling ‘addicted to food’.  Hence, it’s no surprise that it aligns with the maximum energy intake!

Food manufacturers are only too happy to sell us the hyper-palatable and hyper-profitable processed food products that we love to eat and buy!

Is A Low-Carb Diet Healthier than Low-Fat?

Many studies have compared the effects of low-carb vs. low-fat diets on health markers.

Because the reference ranges for ‘healthy’ blood markers are often based on a population consuming a lower fat diet, they are sometimes hard to interpret.  For example, when consuming a lower-carb diet, many people are concerned with higher total cholesterol in their blood.  However, higher blood fat levels should not be surprising if someone is eating more fat and fewer carbs.

Rather than swinging to extremes, adding back some dietary carbohydrates will often lower total cholesterol.  But similar to mixing dietary fat and carbs, very high levels of fat and glucose in your blood simultaneously are dangerous.  For more, see Cholesterol: When to Worry and What to Do About It.

It’s worth noting that your total blood lipids can rise when you lose weight because your body releases stored body fat into circulation.  If you see this, you can repeat your blood tests once your weight has stabilised.

Professor Christopher Gardner’s high-profile 2018 DIETFITS study showed the effectiveness of low-fat and low-fat diets alongside one another.  When subjects were encouraged to follow a moderately low-carb or low-fat diet focused on whole foods, they saw similar results.

Is It Easier to Get Enough Protein on a Low-Carb vs Low-Fat Diet?

Online debates have run in circles for decades over low carb vs low fat.

Despite hundreds of millions of dollars of public and private money spent on studies trying to prove and disprove the Carbohydrate Insulin Hypothesis, it seems that most people are missing the most critical factor and the heaviest-hitting elephant in the room: protein.

Our data suggest that it doesn’t matter whether you prefer a lower-carb or a lower-fat diet, so long as you get enough protein.

People who need to stabilise their blood sugars tend to benefit more when they lower their carbohydrate intake.  Meanwhile, people who do a lot of explosive activity often prefer more carbs and less fat.

But overall, your balance of fat vs. carbs doesn’t matter that much if your protein % is high enough.

So, the more interesting question becomes, ‘is it easier to get enough protein on a low-carb or low-fat diet?’

The chart below shows protein % vs fat % and carb % together.  It seems you can get plenty of protein if you’re consuming a lower-fat or a lower-fat diet.  For best results, you can even lower both.

Whether you prefer to reduce carbs, fat, or even both doesn’t matter much; so long as you get adequate protein and nutrients!

Maybe it’s time we moved on from the endless low carb vs low fat or plants vs animals debates and simply focus on giving our bodies the protein and nutrients they require to be satisfied and thrive.

What Should I Eat?

To dive into the detail of this chart, you can check out the interactive Tableau version here. Simply mouse over the dots to see the details of each food.

You can also download our full suite of (free) nutrient focussed food lists tailored for a range of goals and preferences here. These simple food lists are a great way to start your journey of Nutritional Optimisation.

Finally, this chart shows where our six hundred NutriBooster recipes sit on the carbs vs fat vs nutrient density landscape.

Again, you can view the interactive Tableau version of this chart here to find recipes that align with your goals and preferences.