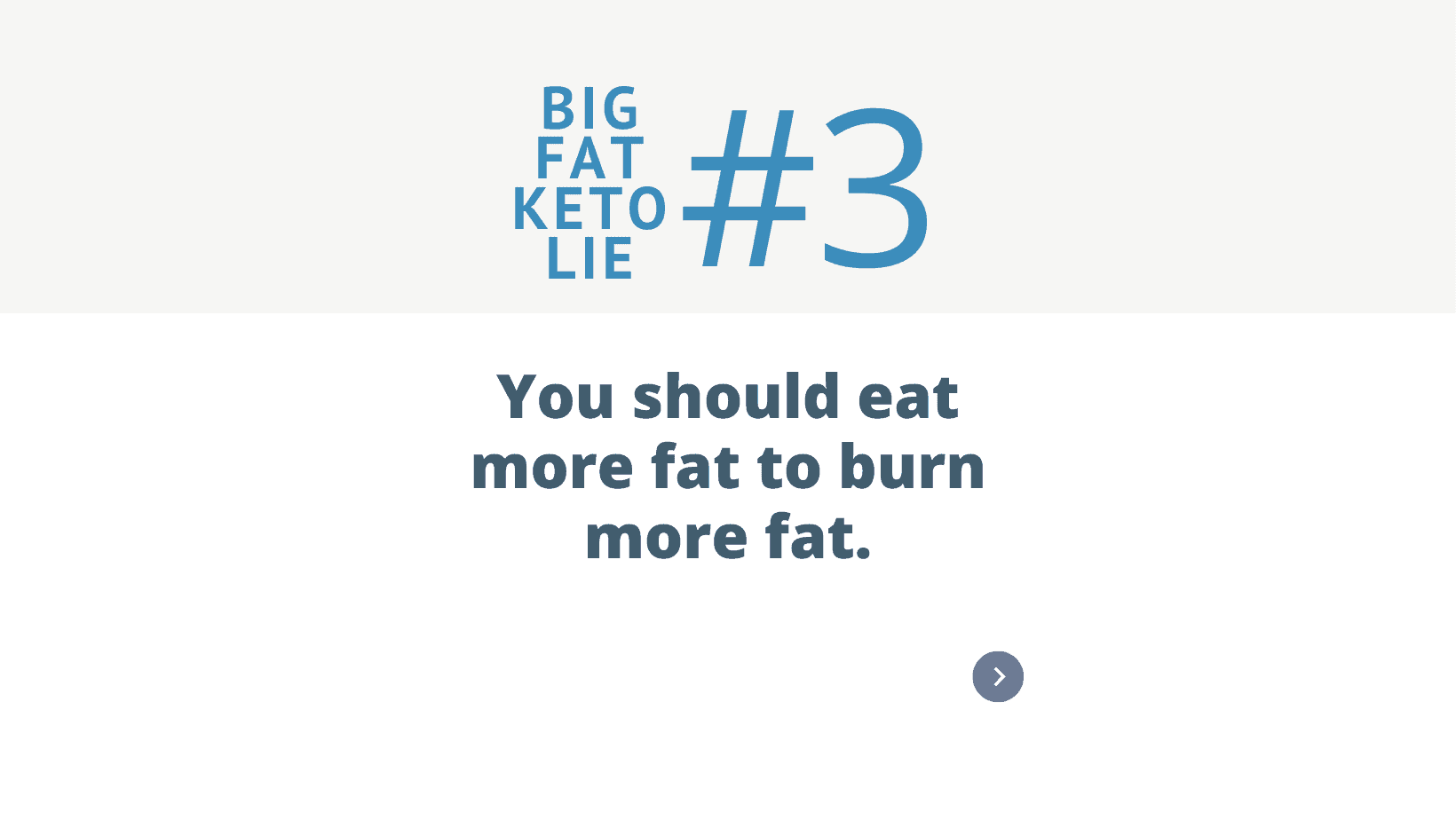 One of the most common responses to any weight loss stall in many keto groups is that you should ‘eat more fat to get your ketones higher and burn more fat’.

This lie is seductive because it is partly correct, as well as delicious!  High-fat foods are highly palatable and provide a dopamine hit that makes us feel great and gives us a quick energy rush.

But it’s important to understand whether your goal is to burn the fat in your diet or the fat on your body.  This distinction is important if you are going to achieve your goals in the long term.

Has reducing fat helped us?

Like all the macronutrients, dietary fat tends to be a controversial and divisive topic.  And as with many popular myths, there is an element of truth to the belief that eating fat will enable us to burn fat.

It’s understandable that many people have swung hard to the other extreme.  We’ve been told for the past half-century (since the 1977 Dietary Guidelines) that we should avoid fat, particularly saturated fat and cholesterol.   However, despite obediently reducing these ‘bad foods’, the obesity epidemic has marched on, seemingly unabated.

The charts (with data from the United States Department of Agriculture Economic Research Service and the Centres for Disease Control) show that, in line with the guidance, we have obediently reduced the percentage of energy in our diet from both saturated fat and cholesterol.   This has been achieved by eating fewer animal products and more high-profit margin refined grains, sugars and seed oils from large-scale agriculture.

So, when we were told that we could eat fat and get skinny, plenty of people jumped on board, swinging to the other extreme, believing that fat could do no wrong.   However, a recurring theme of Optimising Nutrition is that the optimal is rarely found at the extremes, including when it comes to the food we eat.

So, does replacing carbs with fat help you to eat less and lose weight?  Let’s see what the data tells us.

Stanford University (in partnership with Gary Taubes and Peter Attia’s Nutritional Science Initiative) carried out a ground-breaking, year-long major study with more than 609 participants (Effect of Low-Fat vs Low-Carbohydrate Diet on 12-Month Weight Loss in Overweight Adults and the Association With Genotype Pattern or Insulin Secretion: The DIETFITS Randomized Clinical Trial).  They found that (regardless of genetics, insulin levels or blood sugars), participants following either the low-fat or low-carb diet all achieved similar weight loss and improvements in metabolic health.

The researchers initially encouraged participants to pursue a diet as low in carbs or fat as they could achieve.  They then asked them to back off to a level that they thought was sustainable.

The key observations from the Stanford DIETFITS study were as follows.

Lead researcher Professor Chris Gardner stated that, rather than pursuing a magic macronutrient ratio, defining diet quality in a way that leads to satiety is the next exciting frontier of nutritional science.  Empowering people living in the real world to gain control of their appetite will free them from having to weigh and measure everything they eat and without continually having to fight their hunger.

Reducing carbs and eating ‘fat to satiety’ is a simple way for many people to initially move away from the fat+carb danger zone.  But once your progress stalls, it’s time to look to reduce dietary fat as well if you want to increase satiety further, manage your appetite, and continue to burn the fat on your body.  ‘Eat fat to burn fat’ is poor advice that rarely leads to more optimal body composition in the long term.

Sample the other chapters of Big Fat Keto Lies