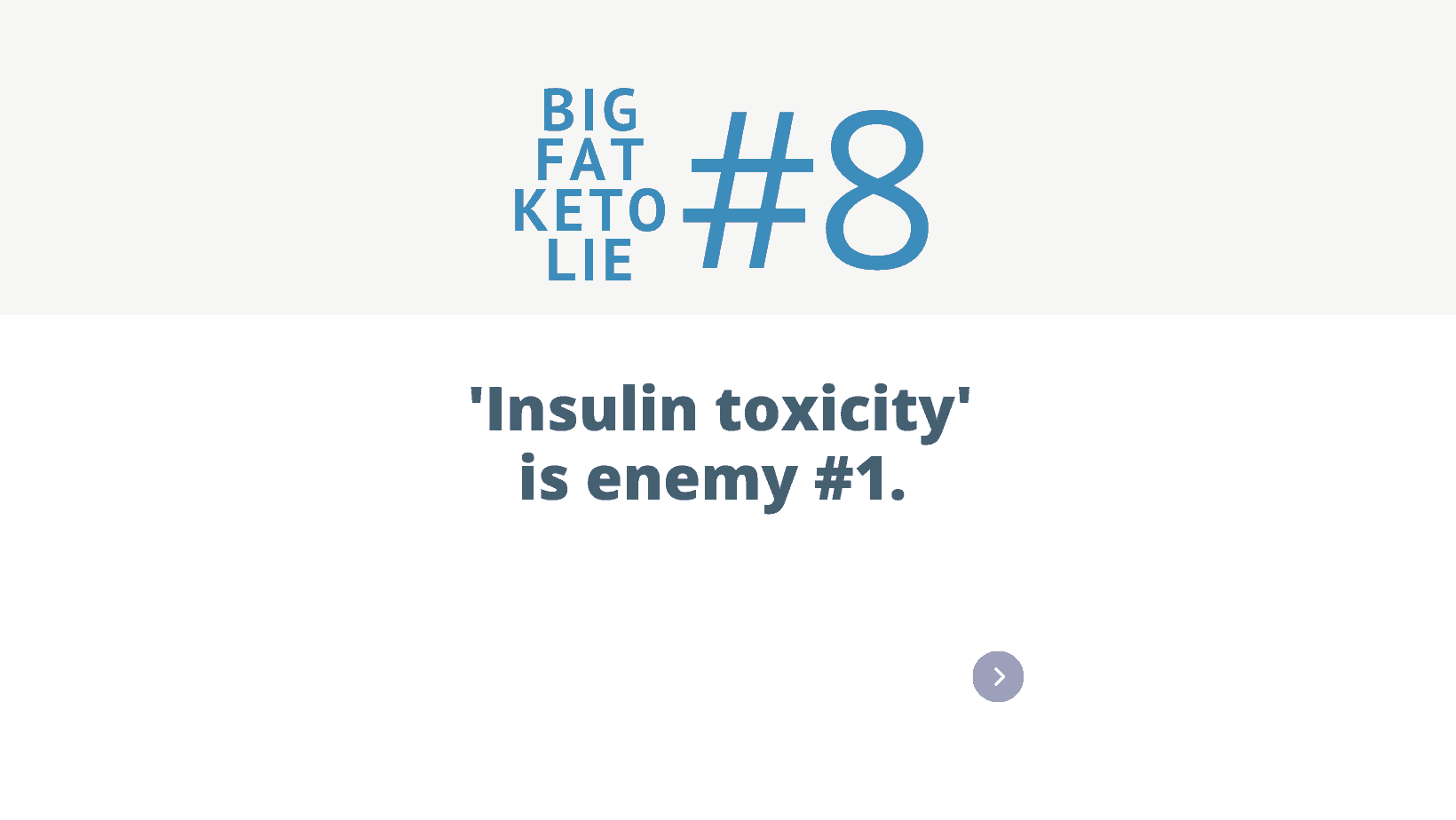 Over the past few years, people in the fasting/low-carb/keto communities have been told that:

Is fat really a ‘free food’ because of insulin?

However, the problem with thinking in terms of ‘insulin toxicity’ comes when we add the belief that carbohydrates and protein will raise insulin (i.e. the Carbohydrate Insulin Hypothesis of Obesity) and hence dietary fat is practically a free food.

The reality is that we don’t have a lot of data about our insulin response to the food we eat.  As shown in the example below.  The data we do have (from the Food Insulin Index testing) only measures the short-term insulin response to foods over the first 2 hours.

Many people extrapolate this data from the measurements we have over 2 hours and assume that fat has no insulin response and hence they can eat almost unlimited dietary fat and they believe that fat is effectively a ‘free food’.

While glucose will raise your insulin levels quickly, foods that contain fat and carbs together (like milk, shown by the aqua line in the chart above) will have a smaller initial impact, but insulin will stay elevated after 2 hours.

While we don’t know that much about the long-term insulin effect of high-fat foods, it appears that they also will keep our insulin levels higher over the longer term.  And because fat is stored more efficiently, you don’t need as much insulin to hold it in storage on your butt and belly.

Once we understand that insulin just holds our stored energy back while we use up the energy coming in from our diet, we realise that ALL food will increase insulin, to some degree, over the long term.

The fundamental problem is not insulin toxicity, but rather energy toxicity.

Fundamentally, diabetes is a condition of insulin insufficiency.

One of the debates that goes around in low carb and keto circles is whether they should be worrying about net carbs, total carbs or processed carbs to manage blood sugars, ketones, and insulin.

It’s often more useful to talk about avoiding processed carbs.  For most people, this is adequate.  If you are trying to avoid nutrient-poor, low satiety foods, then avoiding foods that involve refined sugars and starches is adequate.

As shown in the satiety vs nutrient density chart here, it’s typically these refined carbs that are added to ‘vegetable oils’ that end up being ‘bad carbs’ that people intuitively know that they should avoid (e.g. doughnuts, cookies, croissants, etc).

Meanwhile, there is no need for most people to avoid the non-starchy vegetables.  They will be both hard to overeat, and you will get plenty of the harder to find nutrients per calorie.

For the most part, fibre is not available to be used by your body for energy and hence will not raise blood sugars or insulin.  It is fermented in the gut to feed gut bacteria or is excreted undigested.

Fibre is not necessarily a goal that you need to strive to get a certain minimum amount of.  However, nutrient-dense, high-satiety foods tend to contain plenty of fibre.  The problem with thinking in terms of total carbs rather than net carbs, is when we have people who want to lose weight avoiding foods like lettuce, broccoli and spinach for fear that they will be getting too much carbohydrate because it will kick them out of ketosis, spike their insulin and make them fat.

If you find that you are insulin resistant and your blood sugars rise more than 1.6 mmol/L (or 30 mg/dL) after meals, then it can be useful to think in terms of managing your net carbs or non-fibre carbs.  If you are working to a carbohydrate limit, we recommend most people think in terms of ‘net carbs without sugar alcohols’ (you can select this setting in Cronometer).

Sugar alcohols are typically contained in processed foods to make them sweeter and more palatable (hence you will likely eat more of them).  Some of them will raise your blood sugars while others won’t (see the glycaemic index of sweeteners here).

If you have Type 1 Diabetes, the unfortunate reality is that anything you put into your mouth will have an impact on your blood sugars.  When your stomach stretches when you eat, your body is expecting food and will often release glucose from the liver before the food is digested.  If this is the case for you, then you may need to think in terms of dosing with insulin for anything and everything you eat.

The line between Type 1 and Type 2 Diabetes is not always clear.  Some people develop what is known as ‘Double Diabetes’.

For someone with Type 1 Diabetes, years of injecting large amounts of insulin that drive hunger and overeating, means they develop increased insulin resistance due to increased levels of body fat.  They require more basal insulin to hold their stored energy in storage when not eating, and when they do eat, they will need more insulin for their meals.  When people with Type 1 Diabetes lose weight, we see their basal insulin requirements plummet, and their insulin sensitivity improves, so they need less insulin for meals.

Conversely, someone with Type 2 Diabetes, after a number of years, may find that their pancreas effectively ‘burns out’ and their beta cells are no longer able to produce as much insulin.  At this point, they will need to take more and more insulin.

Sadly, two-thirds of the insulin produced today is used by people with Type 2 Diabetes, which could potentially be avoided with diet and exercise.  People with Type 1 Diabetes may be taking 10 to 40 units of insulin per day, while someone with poorly controlled Type 2 Diabetes may be taking more than 200 units of insulin per day due to their extreme insulin resistance.

So, what’s the solution?

If we want to maximise our insulin sensitivity and lose fat from our body, it’s not merely a matter of eating fewer carbs and more fat as some people would have us believe.  Modifying our diet (i.e. reducing processed carbs) will only marginally decrease the insulin requirements in response to meals (i.e. bolus insulin).

While reducing the processed carbohydrates in your diet will help to reduce the amount of insulin required for meals, we need to keep in mind that the basal insulin (i.e. the insulin produced by our pancreas or injected to maintain stable blood sugars when we don’t eat) comprises the majority of the insulin requirements across the day.

In someone consuming a typical high-carb diet, basal insulin makes up around 50% of their insulin requirements.  However, for someone following a low carb or keto diet, the basal insulin may make up 80 – 90% of their total daily insulin dose (TDD).

In our Nutritional Optimisation Masterclass and Data-Driven Fasting, we encourage people to monitor their blood sugar rise after meals.  If the blood sugar rises by more than 1.6 mmol/L (or 30 mg/dL), then it is a great idea to look to reduce the refined carbohydrates (i.e. net carbs or non-fibre carbs) to the point that the blood sugars stabilise to healthy, non-diabetic levels.

However, if your blood sugars are already below this threshold, there is really no use in trying to stabilise your blood sugars even further, especially if this involves swapping out carbohydrates for fat.  If you already have healthy blood sugar levels, then you can get on with prioritising nutrient density and satiety.

If you still have body fat to lose, the next step is to simply prioritise foods and meals that provide greater satiety and nutrient density (they typically go together).  In the Nutritional Optimisation Masterclass, we use Nutrient Optimiser to guide you to:

This process can continue until a healthy level of body fat is achieved (i.e. waist:height ratio of less than 0.5 or less than 15% body fat for men and less than 25% body fat for women).  By doing this, we will reduce both basal and bolus insulin requirements and vastly improve insulin sensitivity.

In the Data-Driven Fasting Challenge, we use pre-meal blood sugars to guide meal timing to ensure that an overall energy deficit is being achieved.  If blood sugars are low and stable, but weight loss is not occurring, then we encourage people to increase the protein percentage of their meals by dialling back both the carbs and fat in their diet.

If your blood sugars are already in the healthy range and you are not injecting insulin to manage your diabetes, rather than worrying so much about your rise in blood sugars and insulin after meals, it’s more useful to monitor your blood sugars before meals and delay/or skip them until they return to below your baseline.

Waiting for your blood sugars to return to baseline will ensure you are not over-fuelling.  But, waiting a little longer, until they are a little lower, empowers you to validate your hunger and ensure a long-term energy deficit that will reverse energy toxicity.

How to optimise your Type 1 Diabetes management

If you are injecting insulin, the process is similar to the process above, with the following additions.

Get your copy of Big Fat Keto Lies here

Sample the other chapters