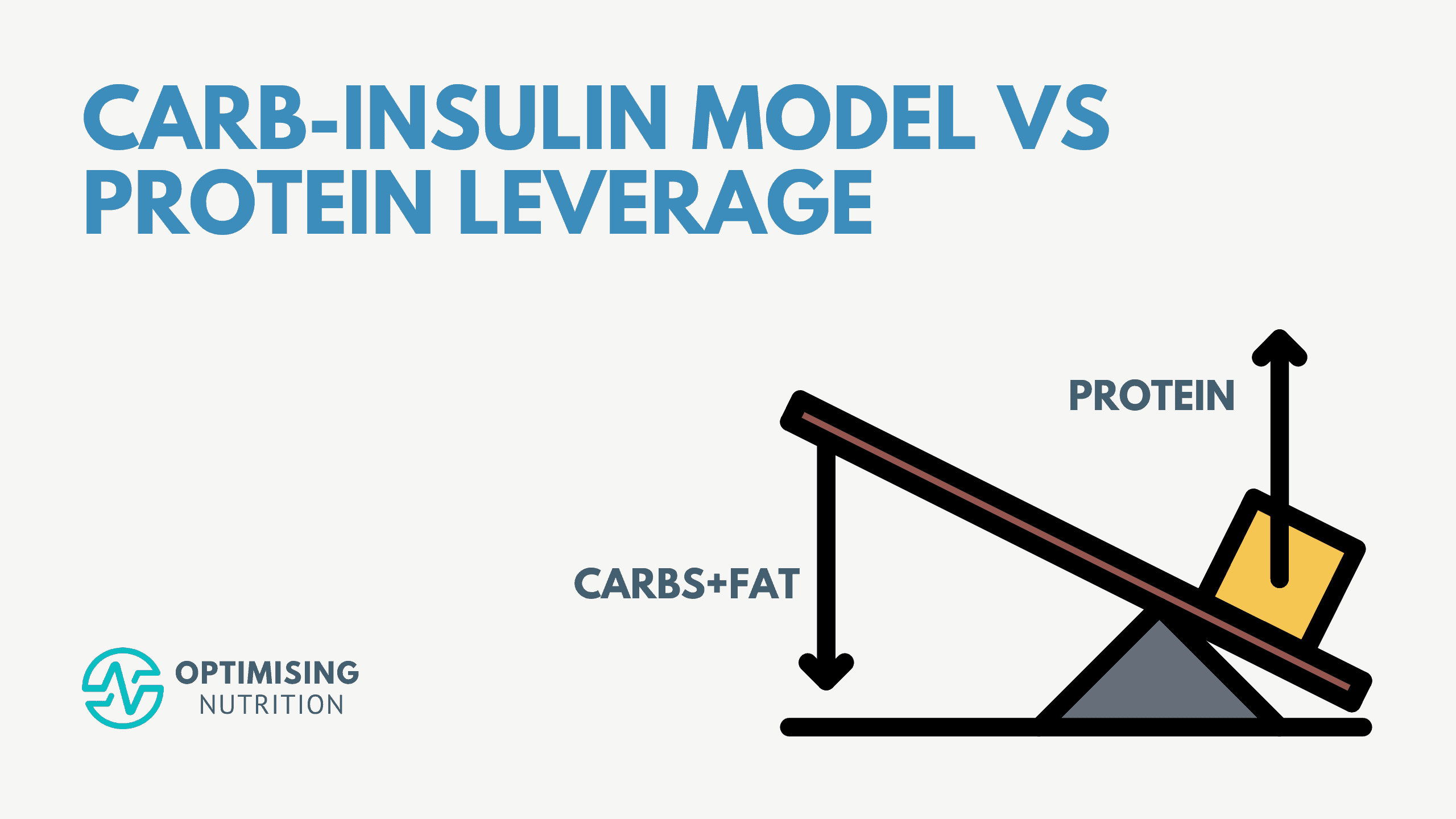 I’ve recently been having some ‘robust discussion’ on social media around what I think amounts to the Carb-Insulin Model vs the Protein Leverage Hypothesis of obesity and diabetes.

I wanted to unpack and juxtapose the similarities and differences between the two models and explain why I feel the protein leverage hypothesis is a more elegant, complete, and actionable explanation.

While there are many iterations of the carb-insulin model, it generally goes like this:

Many believe the simple solution is to cut carbs to decrease insulin and lose weight.  This has been the dominant belief that has driven the keto movement.

In contrast, the Protein Leverage Hypothesis of Obesity explains that we become overweight because we continue to eat until we get enough of the nutrients our bodies need, particularly protein.  In other words, we’ll overeat energy — from fat and carbs — if our food environment is low in protein.  We become obese and insulin-resistant from overconsuming energy.

Our food system has become increasingly refined, processed, and inundated with more energy from refined sugars, grains, and industrial seed oils.  Additionally, synthetic fertilisers, agricultural subsidies, and technological innovations regarding food production have made these foods both hyper-palatable and hyper-profitable.

Smart food manufacturers love to sell us the food we love to eat!

So, to reverse this trend, we must dial back energy from BOTH carbs and fat while prioritising protein.  Interestingly, this doesn’t mean you have to increase your absolute protein intake (i.e., in grams) much, if at all.  It doesn’t take a significant shift in protein % to increase satiety marginally and decrease overall energy intake.  For more, check out this article on the Protein Leverage Hypothesis.

Aside from protein, our analysis suggests we also crave other nutrients—like vitamins, minerals, essential fatty acids, and amino acids—in our food.  Thus, we’ll be satisfied with fewer calories if we can pack more of all the nutrients we need into our food.  For more detail on this, check out The Cheat Codes for Nutrition for Optimal Satiety and Health.

In an exciting juxtaposition, each model’s foremost proponents recently gave a 15-minute presentation to the Royal Society Scientific Meeting on the Causes of Obesity: Theories, Conjectures, and Evidence.  For details, check out this video on Dr David Ludwig’s presentation on the Carb-Insulin Hypothesis (from 4:38), followed by Professor Stephen Simpson (from 37:03).

I’m a fan of lower-carb diets—not to be mistaken for high-fat—particularly for people with dysregulated blood glucose levels.  However, I don’t believe the magic simply comes from its ability to reduce glucose and insulin after you eat.

The real magic of lower-carb diets comes from their ability to move you away from the fat-and-carb combo foods that overdrive-drive your dopamine.  The foods most people consider to be ‘bad carbs’—like cakes, chips, doughnuts, and pizza—are actually the magical low-protein, low-fibre combinations of fat and carbs.

These low-satiety foods allow us to fill our glucose and fat fuel tanks simultaneously and rapidly.  Our bodies LOVE these foods, so we crave and eat more.

We created the chart below using our satiety analysis of one hundred and fifty thousand days of food logging data from forty-five thousand Nutrient Optimiser users.  As we can see, we eat 23% fewer calories when we lower non-fibre carbs from 45% to 10-20%.

Additionally, reducing our carb consumption stabilises our blood glucose levels so we can get off the blood sugar rollercoaster and regain control of our appetite.  The biggest problem with large intakes of high-glycemic carbs in the short term is when your glucose rapidly spikes and then crashes a few hours later.

When your glucose levels fall below your normal, your primitive ‘lizard brain’ takes over, and you eat anything and everything until you feel good and raise your blood glucose again!

An elegant study from the Zoe team with more than a thousand people wearing CGMs—Postprandial glycaemic dips predict appetite and energy intake in healthy individuals—showed that people who have the largest swings in glucose that tend to have the most dysregulated appetite and end up eating more at the next meal.

As this process continues, we eat more than we need to and gain weight.  Because insulin works primarily as an anti-catabolic hormone that keeps us from using stored energy, we eventually need more insulin to store that fat.

Before too long, basal insulin levels creep up, and we become insulin resistant because we are getting fatter (not the reverse).

When discussing insulin, it’s important to differentiate between bolus and basal insulin.

Because it’s easy to measure, bolus insulin usually gets most of the attention.  The Food Insulin Index testing shows that carbs raise insulin the most over the first three hours. Protein and fat have a much smaller impact over a longer period of time.

But the rise in insulin after you eat is only half the story.  Data from people with Type 1 Diabetes suggest that about half the insulin produced by the pancreas on a standard western diet is basal.  If you reduce your carbs, you may end up with an 80:20 basal:bolus split.

Someone who is obese and insulin resistant may have a fasting insulin of 30 uIU/mL.  This basal insulin is required across the day just to hold the large amounts of stored energy (body fat and glycogen) in storage.   Without the basal insulin, all of their stored energy would spew into their bloodstream like someone with uncontrolled Type 1 Diabetes.

Your body has plenty of capacity to store dietary fat as body fat, so we don’t see a large short-term insulin response to a high-fat meal. However, excess dietary fat can still contribute to body fat and thus increase your basal insulin.  The bigger you are, the harder your pancreas will need to work to keep all that energy in storage.

The bottom line here is that:

Reducing Carbs is a Smart Place to Start

In Data-Driven Fasting and our Macros Masterclass, we suggest participants dial back their intake of refined and processed carbs if their glucose rises by more than 30 mg/dL (1.6 mmol/L) after they eat.

However, most people in our challenges already come from a lower-carb or keto background.  Because they have been told that carbs and insulin work together as our mortal enemy, their progress stalls out because they often overconsume dietary fat.

The chart below shows the distribution of the rise in glucose after meals in our Data-Driven Fasting Challenges. Only about 9% of participants find they need to dial back carbs to achieve healthy post-meal glucose levels.

A lot of my time each day is spent helping people understand that just because dietary fat does not raise glucose or insulin much over the short term, fat is not a ‘free food’ that they can eat to satiety.

In our Macros Masterclass, many people quickly realise how many extra calories come from fat when they start tracking their foods.  Fat also contains little in the way of micronutrients—or your vitamins, minerals, and amino acids—so it isn’t very satiating.

Participants of our Data-Driven Fasting Challenges find that when they dial back their dietary fat, their glucose drops sooner, and they can eat a nourishing meal again sooner.

Fat Is NOT a Free Food!

Unfortunately, dietary fat is not a free food you can ‘eat to satiety’, as some have been led to believe.  When we look at the relative satiety response of fat vs carbs, we see that reducing fat can influence satiety even more.

Lowering carbs while not fearing fat can be a great way to start your weight loss journey.  However, if we believe carbs raise insulin and insulin makes us fat, it’s easy to give ourselves a free pass to fat and swap one pattern of disordered eating for another.  Unfortunately, we can’t simply ‘hack’ our biology.  Optimal never lies at extremes!

Excessive dietary fat consumption can lead to fat gain and high basal insulin levels.  In fact, slamming fat in pursuit of high ketones and ‘eating fat to satiety’ can easily contribute to increased insulin resistance.  Consuming more energy beyond Your Personal Fat Threshold will lead to metabolic disorder over time.

The Protein Leverage Hypothesis centres around the idea that we eat to get what we need from food, whether it be protein, the amino acids that makeup protein, or other vitamins, minerals, and essential fatty acids.

So, the elegant solution is to prioritise giving our bodies what it needs and reduce our energy intake if we are obese or insulin resistant.

The chart below shows the average satiety responses to all the macros and fibre alongside one another.  Here, we can see that:

When you give your body the protein and nutrients it needs with less energy, your appetite settles down.

This is theoretically simple but not necessarily easy in practice because you must fight against your natural urges for comforting energy-dense, low-protein carb-and-fat combo foods.

In nature, this macronutrient combination was only available in the months leading up to wintertime, which allowed us to pack on the pounds and make it through what could be a long winter.  It’s hard to resist these foods when they surround us because we’re hard-wired to eat more of them when they’re available!  Your life literally depends on it—or so your body thinks.

To tie this up, I want to touch on another theory I find extremely helpful for understanding insulin resistance and diabetes—Professor Roy Taylor’s Personal Fat Threshold Theory.

Your body has a large—but not infinite—capacity to store fat.  Once your body fat capacity taps out, energy backs up in your system, which you see as high blood glucose.  Essentially, you’ve over-fuelled your fat and carb fuel tanks, which you see on your glucometer.

Most of us walk around with all our fuel tanks full to the brim.  Because of oxidative priority, we must deplete our glucose before we can unlock our stored body fat.

Dialling back carbs allows you to manage symptoms of insulin resistance, like high blood glucose.  But it doesn’t address the root cause—energy toxicity—that stems from exceptionally high body fat levels, particularly if we keep overfilling our fat fuel tank.

Everyone has a different body fat threshold, which explains why people become insulin resistant at different weights.

If your goal is to burn and lose body fat, it is still critical to dial back dietary fat.  If we can scale back our intake of carbs and a little fat while prioritising protein and nutrients to maximise satiety, we can draw down our body fat and address energy toxicity, the root cause of insulin resistance.  Eventually, your pancreas won’t need to work as hard to keep all that body fat locked away in storage.

What to Eat to Increase Satiety and Reverse Insulin Resistance

So, by now, you probably want to know what to eat.

There’s no magical protein leverage diet.  It’s simply a matter of giving your body the protein and nutrients it needs with less energy.

With all the nutrients and less energy, your cravings will settle so you can draw down on the stored energy in your body.

The chart below shows how various foods rank in terms of protein % vs nutrient density vs satiety.

You can dive into the detail with our interactive Tableuea chart here or access our suite of free food lists.

Rather than just foods, the chart below shows six hundred of our NutriBooster recipes, graphed in terms of protein % vs nutrient density vs satiety.  You can also dive into all the details in the Tableau chart here.