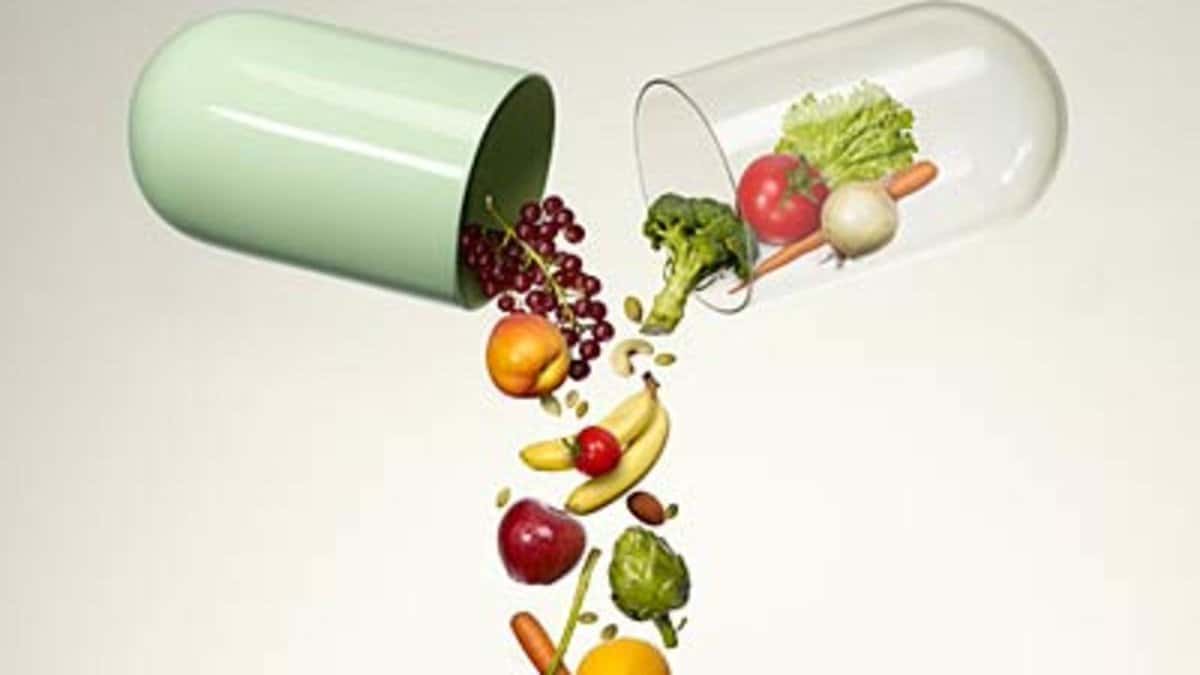 The dietary supplement industry is worth $125 billion per year and is set to reach a massive $210 billion by 2026.  Vitamins are big business, marketing to the hopes and dreams of people who want to improve their health, lose weight and compensate for a poor diet.

This article looks at the satiety response to vitamins, analysing forty thousand days of food diaries from more than a thousand Optimisers.

This article is the fifth in an eight-part series looking at the satiety response the essential micronutrients.

The figure below shows conceptually how the recommendations for vitamins are quantified.

On the left, we see:

On the far right, we see the Upper Tolerable Limit (UL), which is the amount set as the warning level where we may encounter adverse side effects from excessive supplementation.

The range between the RDA and the UL is a bit of an undefined no man’s land.  While there are plenty of claims about the benefits of higher supplement intakes, we don’t know much about the levels that will provide optimal benefit.

The goal of this analysis is to determine the optimal level that provides maximum benefit without being excessive.

To set some context, the table below shows the:

Our data from Optimisers allows us to gain an understanding of how each of the nutrients affects how much you eat and what is achievable with a little attention to food quality.  There is no use setting nutrient targets that are way above what can be achieved with a healthy diet.

The table below shows:

While minerals can be bulky and hard to fit in a capsule, it has become commonplace to fortify nutrient-poor foods with vitamins that are cheap and compact and can easily be packed into a pill, powder or food additive.

Modern food processing and long-term storage deplete many of the essential vitamins in our food. So fortification of nutrient-poor common foods has been mandated to prevent nutrient deficiencies.

Vitamins are cheap to manufacture and make the food look healthier (at least according to the ‘nutrition facts’ label).

When optimising our minerals, there are several important ratios to pay attention to.  Minerals compete for absorption.  Excessive mineral supplementation can also lead to diarrhea.

But with vitamins, it’s hard to get too much of them from food.  Vitamins are water-soluble, so your body quickly flushes excess vitamins from your body. It’s only the supplemental forms that become problematic.  For example:

Foods that naturally contain more vitamins per calorie tend to be more satiating.  However, supplementation does not provide the same effect.

Our goal is to identify reasonable stretch target intakes that will provide an optimal level of benefit without going beyond what is possible with food.

Once you have hit the stretch target for that nutrient, you can move on to focus on foods and meals that contain the other nutrients.

The chart below shows the satiety response curve for Vitamin B3 (Niacin).

The horizontal axis is the niacin intake per 2000 calories, while the vertical axis is calculated by dividing the individual’s daily calorie intake by their basal metabolic rate (BMR).

It seems that we get a significant improvement in satiety from foods that contain more than the recommended minimum (i.e. than the Estimated Average Requirement (11 mg/day), population average intake (17 mg), and the Recommended Dietary Intake (16 mg).

Based on this analysis, we have set a stretch target for Vitamin B3 of 70 mg/2000 calories.  Our body doesn’t seem to crave more than this amount. Beyond this point, you’re likely just wasting money on supplements.

The frequency distribution chart below shows that 70 mg/day is achievable without supplementation.  However, there are plenty of people getting more than 100 mg per day from supplements or fortified foods.

The satiety response curve for Folate indicates that we get a significant satiety response to folate well beyond the Estimated Average Requirement (320 mcg/day), Recommended Dietary Intake (400 mcg/day) and population average (435 mcg/day) for folate.

While there are no adverse effects associated with the consumption of folate from food, an upper limit of 1.0 mg per day has been set for synthetic supplemental folic acid.

High supplemental intakes of B9 has been associated with adverse neurological effects in people with minimal B12 intake (e.g. strict vegans) can precipitate and exacerbate the deficiency.  Hence, it is important to get as much of your folate as possible from food.

While there are no side effects of higher levels of riboflavin, there is also no benefit beyond 8mg/2000 calories.

Fun fact: Vitamin B2 (riboflavin) is the micronutrient that makes your pee turn yellow, so supplement manufacturers like to use plenty of it to give people a positive reinforcement for taking their vitamin pills to encourage them to keep doing it.

As you can see in the frequency distribution plot below, there are a significant amount of people taking more than 10 mg per day (i.e. around ten times the minimum requirement).  These high-level intakes are unlikely to provide additional benefit (other than a false sense of security when you go to the toilet).

The satiety response for Pantothenic Acid (Vitamin B5) has an inflection point around 11 mg/2000 calories where additional vitamin B5 does not provide much additional benefit.

Similar to riboflavin, at higher levels that would only be possible with supplementation, we see a decrease in the satiety response.

Based on this analysis, we have set a stretch target of 12 mg/day for vitamin B5.

It’s worth noting that Vitamin E is an antioxidant that is required to offset the inflammatory effects of excess omega 6 intakes.  So if you are not consuming large amounts of seed oils, you will not need to worry as much about hitting your vitamin E target (refer Which fats will make you skinny for more details on optimal omega 6 intakes).

The Vitamin E in the food system has increased significantly over the past century as we have increased our consumption of omega 6-rich seed oils.

Given that there are no deficiency conditions relating to a low Vitamin E intake below a certain level, there is no reason to prioritise Vitamin E beyond what can be achieved with nutrient-dense whole foods.

While we do see an improved satiety response with very high levels, Vitamin D is hard to get from food.  As with omega 3, fatty fish is your best dietary source of omega D.

Excessive Vitamin D can cause excess absorption of calcium, which can lead to calcium being deposited in places you don’t want it (e.g. your arteries rather than your bones and teeth).

While we have set a stretch target of 3500 IU for Vitamin D from food to align with the 85th percentile intake of Optimisers, you need to make an effort to get your vitamin D from the sun in addition to your food.

Getting adequate sun exposure is also critical to locking in your circadian rhythm and helping you sleep.

While we see a strong satiety response from higher intakes of thiamine, we also see a ‘rebound response above 8 mg/2000 calories.  Supplementing a poor diet does not provide benefit above the levels that you can get from whole foods.

We see a strong satiety response when we increase vitamin B6 to around 5 mg/2000 calories.

Vitamin B12, which is critical for neurological function, has decreased substantially since the introduction of the 1977 US Dietary Guidelines, which prioritised grains and discouraged saturated fat from animal-based foods.

The satiety response curve shows that we tend to eat less as we increase vitamin B12 up until around 30 mcg/2000 calories.  Higher intakes do not provide additional benefits.

Vitamin C is a nutrient that is often claimed to have many benefits.  The satiety response curve indicates that more may be slightly better.  However, there is no significant benefit in getting more than 300 mg/2000 calories of vitamin C.

The satiety response curve for vitamin K shows an inflection point at around 700 mcg/2000 calories.  Our stretch target of 1000 mg/day aligns with the 85th percentile intake of Optimisers.

Vitamin A is critical for vision, reproduction and immune function and is found in liver, fish, eggs and dairy.  Unfortunately, vitamin A has also decreased in our food system significantly since the Dietary Guidelines for Americans in 1977, which encouraged more “healthy whole grains” and fewer animal products.

The satiety response to Vitamin A is interesting.  Although we seem to get an improvement in satiety up to 60,000 IU/2000 calories, the official Upper Limit for preformed supplemental Vitamin A is set at 10,000 IU/day.

We’ve set the stretch target at 10,000 IU/day to align with the Upper Limit.   However, you are unlikely to experience any significant problems if you consume higher levels of vitamin A from food, particularly from a mixed diet (which contains beta carotene which doesn’t convert to preformed vitamin A as easily).

The chart below shows all the vitamin satiety response curves together.   The vitamins with the shortest and flattest nutrients tend to have the least impact on satiety, while the nutrients that have the longest and steepest curve have the most significant impact.

Vitamins D, E, A, B1 and B5 don’t seem to play a significant role in our satiety response, potentially because they are already available in adequate quantities in our food system.

This next chart shows the vitamins with the most significant satiety response.  If you want to maximise satiety, you should prioritise foods and meals that contain more folate, B2, B6 and B3.

But before you go out and order all these supplements in lots of little bottles, keep in mind that this analysis represents the satiety response to foods that contain these nutrients.  Nutrient-dense foods are part of a matrix that also contains protein, fibre, carbs, fat, water and other nutrients that we don’t quantify.

While supplements may play a role in preventing deficiency, they are unlikely to lead you to optimal health.  You’ll just be putting extra load on your kidneys that have to work harder to clear the supplements you don’t need.

If your goal is to achieve optimal health (rather than avoid diseases of deficiency), you should initially refine your diet to hit the Dietary Reference Intake for vitamins.

Once you start to get the hang of nutrient density, you can enter these stretch targets in Cronometer and work to level up your nutrient density using Nutrient Optimiser.

After four years of digging into the theory, we’ve created some exciting tools to help you optimise your nutrition. We’d love you to check them out!

In our next instalment, we’ll be looking at the satiety response to the essential amino acids that make up protein.