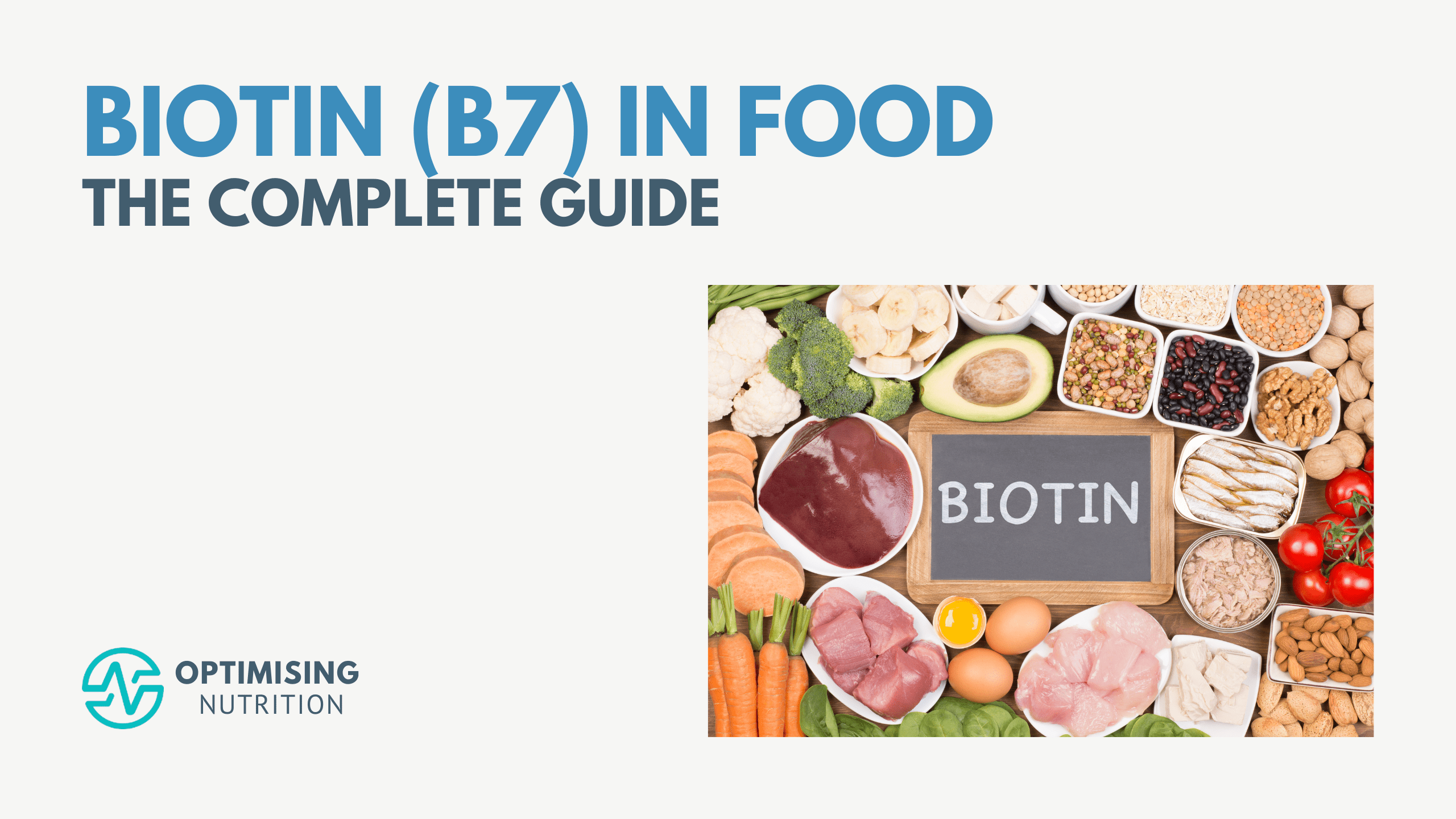 Vitamin B7, or biotin, is a B vitamin that’s known for its role in hair, skin, and nail health.

This water-soluble nutrient is named for the Greek word, ‘bios’, which means to live, and the chemistry suffix -tin, which means life-forming.

This article discusses the roles of biotin and where you can find it in food.

History and Background of Biotin

In many mammals, eating a lot of raw egg whites somehow caused nervous system dysfunction, hair loss, dermatitis, and—in some cases—death.  For some years, this ‘egg white injury’ would be a mystery.

However, in 1936, Fritz Kogl and Benno Tonnis isolated a yeast-grown factor that would explain this phenomenon, later known as biotin.  Several other scientists also isolated it independently around the same time.

Biotin was initially named ‘vitamin H’ for the German word haar (hair) and haut (skin) because of its role in hair and skin health.  Over time, though, this water-soluble nutrient was categorised as a B vitamin as researchers learned more about its functions.

By 1941, scientists realised that ‘egg white injury’ was not from egg white toxicity but from the binding of avidin in egg white to biotin.  In 1943, it was first synthesised by Leo Sternbach and Moses Wolf Goldberg as an isolate.  It took nearly 40 years to establish biotin as a vitamin from it’s discovery!

Originally, biotin was used to boost the strength of horses’ hooves and the shine and length of their manes, tails, and coats, which led them to study it more in humans.  This led to the discovery of its role in hair, skin, nails, and many other bodily processes.

Biotin is the seventh vitamin of the B vitamin family.  It is an essential nutrient that we need for many physiological and metabolic processes that not only help you thrive but also keep you alive!  Aside from its role in hair, skin, and nails, we’ve included the roles of biotin below.

Where to Find Biotin

Biotin can be synthesised by some bacteria, yeast, mould, algae, and plants, making this nutrient abundant in many omnivorous whole foods.  Here’s a list of the most biotin-rich plant and animal foods:

High heat from excessive cooking destroys biotin, so be sure not to overdo it!

Biotin uptake occurs in the small intestine and is known to be well-absorbed; even high amounts consumed via supplementation are absorbed very well.  However, as always, whole food sources are always best!

Aside from what you consume from food and absorb, bacteria from your large intestine also produce similar amounts to what an average diet provides.  However, how much of that we absorb is unknown.  What we do know is that long-term antibiotic use can contribute to conditions associated with biotin deficiency.

Synergists and Antagonists of Biotin

Vitamins and minerals have antagonistic (opposing) and synergistic (compounding) effects on one another, depending on the nutrient in question.  High amounts of one nutrient can lead to a deficiency in one that it antagonises, whereas consuming large quantities of another can increase the retention of its synergist.

Because of its role in protein, carb, and fat metabolism, other B vitamins like thiamine (B1), riboflavin (B2), niacin (B3), pantothenic acid (B5), pyridoxine (B6), folate (B9), and cobalamin (B12) are considered synergists of biotin.

Pantothenic acid and biotin both use the same nutrient transporter—sodium-dependent multivitamin transporter (SMVT)—meaning high intakes of either can impede the other.  Although inessential, alpha-lipoic acid also uses this receptor, which can inhibit biotin absorption (or vice versa) if taken simultaneously.

Aside from nutrients and supplements, RAW egg white can inhibit biotin absorption and serve as a biotin antagonist.  However, there is no need to fear eggs as cooking denatures the avidin and makes it safe to eat.  Additionally, it would take a lot of raw eggs—like 24 per day—for several months to have an actual effect.  Sorry, but no downing glasses of eggs like Rocky!

Biotin deficiency is rare, especially in developed nations, because recommended intakes are usually obtainable if someone consumes a somewhat varied diet.  However, some factors can trigger or influence a deficiency, like:

As mentioned, biotin deficiency is rare because it’s in almost everything.  However, inadequate intake has been observed in people receiving total parenteral nutrition (TPN) and other populations, leading to symptoms like:

Symptoms for congenital abnormalities that contribute to biotinidase deficiency include:

Symptoms of B7 Toxicity

To date, no amount of vitamin B7 has been shown to be toxic.

Like most B vitamins, it is water soluble, meaning the body does not store it.  Super high doses of 100 to 600 milligrams (mg)—or 7,000 times the Adequate Intake of 30 micrograms per day—were shown to be beneficial in studies looking at its effects in people with Multiple Sclerosis.

That said, we recommend focusing on getting your biotin from nutrient-dense whole foods unless you are using it to address a specific condition.  This minimises the risk of having ‘aftereffects’ on other synergistic and antagonistic nutrients down the line.

Because biotin toxicity is rare and no case of overdose has ever been documented, no tolerable upper limit (UL) has been set for biotin.

While toxicity is unlikely, it’s essential to remember that nutrients often affect one another and have direct and indirect effects on the body.  Hence, supraphysiological doses of any nutrient for long periods may have detrimental effects.

Subsequently, we recommend getting your biotin from nutrient-dense whole foods unless you use it for a targeted condition.  This will prevent any unpredictable effects that could arise.

The Recommended Daily Allowance (RDA) for biotin was set using its Adequate Intake, or the quantity of a nutrient that appears to be sufficient for the observed population.  It was set at 30 micrograms (mcg) per day for men and women 19 and older.

With biotin’s recommended intake—and any other nutrient’s recommended intake, for that matter—keep in mind that this is the quantity of the nutrient required to evade deficiency in 97.5% of the population.  In other words, it isn’t an amount that’s necessary for optimal health.

Biotin supplements have become popular, especially for supporting strong and long hair, skin, and nails.  However, it has several other clinical uses, which we’ve included below.

Interestingly, biotin supplementation is known to skew thyroid and sex hormone bloodwork and cause false readings.  As a result, it’s recommended to discontinue them at least 48 hours to one week before you’re scheduled for testing.

Currently, most databases do not have accurate or consistent data on the biotin content of foods.  Subsequently, we can’t run an accurate or meaningful satiety analysis on biotin.  However, this could change.

Whether or not we have a strong satiety response to biotin will remain unconfirmed for the time being.  However, the most biotin-rich foods are nutrient-dense animal foods like liver, meat, poultry, and dairy.  Many of these foods rank highly on our satiety scale.

Rather than reaching for a supplement bottle, it will be ideal to ensure you are consuming nutrient-dense foods and meals that will contain plenty of biotin along with all the other essential nutrients.