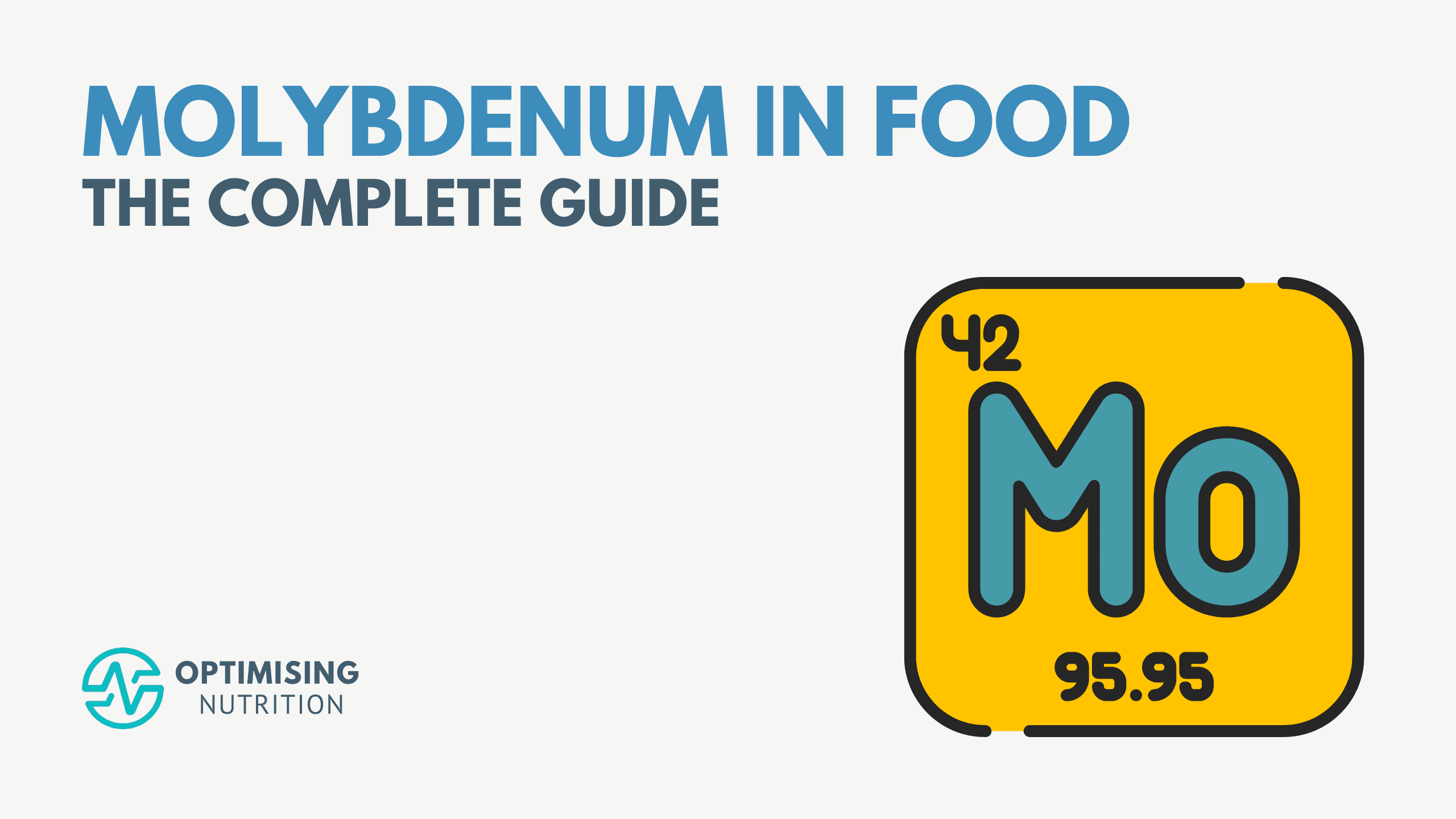 Molybdenum wears atomic number 42 on the periodic and is essential for humans in small amounts.  As you will see, it has many roles.  It also might have the most complicated name to pronounce of any other element we consume via diet!

Despite its importance, we are still learning about the roles of molybdenum and everything it does.

In this guide, we’ll review molybdenum’s role in the body, where to find it, its history, and everything else you need to know about this mighty mineral!

Molybdenum was discovered in 1778 by a Swedish chemist named Karl Wilhelm Scheele.  While the mineral has been known for many years throughout history, he finally differentiated it from other elements—like lead.  Because of its similarities to lead, it was named for the Greek word molbydos-, which means ‘lead-like’.

In the 1930s, farmers recognised cattle overconsuming molybdenum resulted in a ‘scouring’ disease called ‘teart’ attributed to a copper and sulphate imbalance it created.  This observation became critical for understanding the antagonistic and synergistic relationships of molybdenum, copper and sulphur in cattle and humans.

In the 1950s, scientists showed molybdenum was essential for human life, as it played a role in four critical enzymes humans require to function.  In the 1980s, molybdenum deficiency was observed a patient receiving total parental nutrition (TPN), allowing them to understand how humans responded without it.

Molybdenum has an atomic number of 42, and it sits in row 5 and group 6.  This means it shares a similar valence structure with Chromium (Cr) and Tungsten (W), which is critical to know in nutrition as it can help us predict mineral antagonists.

Outside of having a biological role in human health, molybdenum has been used to make metal alloys and increase the hardness, strength, resistance to corrosion, and conductivity of steel.  It has been used since its discovery almost three hundred years ago in various products, like drills, saw blades, furnace manufacture, and weaponry in WWII.

Most notably, molybdenum is a primary component of an enzyme that catalyses the conversion of atmospheric nitrogen c into ammonia, a process known as nitrogen fixation.  In other words, it sequesters air components into the soil that serve as fertilisers and other valuable compounds.  As a result, it is a topic of debate amongst client change activists.

Roles of Molybdenum in the Human Body

Although we only require trace amounts of molybdenum, its roles in the human body are significant.  Molybdenum is a necessary cofactor for four enzymes present in many living organisms.  These enzymes include xanthine oxidase, sulphite oxidase, aldehyde oxidase, and mitochondrial amidoxime-reducing component (mARC).

Sulphite oxidase is a molybdenum-containing enzyme located in the mitochondria of all eukaryotes, minus yeasts.  Its role is to convert sulphite—a known toxin to the body—into sulphate, a critical compound required for hormone use and detoxification.

Sulphite is generated from the metabolism of sulphurous amino acids like methionine and cysteine.  Recently, this enzyme has also been shown to play a part in reducing nitrite to nitric oxide.  It is found in its greatest concentrations in the liver, kidney, and heart.

If you are sensitive to sulphurous foods or the sulphite in wine, molybdenum may be helpful because it converts sulphite into a compound usable to the body.

Aldehyde oxidase is another molybdenum-containing enzyme found readily in the liver.  However, it is also found in the gastrointestinal tract, kidneys, and lungs.  Its primary role—that is known, anyway—is to metabolise drugs and toxins.  Some substances it is known to break down include methotrexate, methyl nicotinamide, methyl pthalazinium, benzaldehydes, retinal, vanillin, and other anti-cancer and immunosuppressive drugs.  It is also known to metabolise certain xenobiotics.

Xanthine oxidase is the third molybdenum-driven enzyme, which initiates the breakdown of nucleotides—the precursors of DNA and RNA—into uric acid.  It converts old parts of DNA into uric acid, which is excreted in the urine.  If these by-products of nucleic acids build up, it will cause DNA damage.  Xanthine oxidase is found in the liver, heart, lung, and fat tissues and is located in some of the cells that line the capillaries of the circulatory system.

Lastly, we have mitochondrial amidoxime-reducing component (mARC).  This compound catalyses the reduction and metabolism of prodrugs (i.e., inactive drug precursors) into compounds that the body can use.  It also helps convert toxic nitrite into nitric oxide and detoxifies the body from certain toxic substances.

Simply put, we need mo’ molybdenum to make these enzymes and keep our bodies free of harmful, toxic substances!

Unlike some nutrients, molybdenum is absorbed rather well.  It is estimated that anywhere from 40-100% of the molybdenum someone consumes makes it into the bloodstream; studies have shown that infants absorb almost all the molybdenum they consume from breast milk.  It is then stored as something known as molybdopterin in organs like the liver, kidneys, adrenals, and bone.

You may require more molybdenum if you consume a higher protein diet, high amounts of copper and sulphate, or have asthma symptoms.

Antagonists and Synergists of Molybdenum

Mineral synergists increase the function of a nutrient and work with it in a given process.

In contrast, mineral antagonists are known to decrease levels of a specific nutrient.  Hence, consuming too much of one nutrient can lead to depletion and deficiency of another over time, which is why it’s essential to talk about antagonists and synergists!

The most-known molybdenum antagonist is copper.  Over-supplementing molybdenum can deplete copper levels.  This was discovered in ruminant animals who had overconsumed copper and died from low molybdenum levels, as molybdenum is required to metabolise the by-products of fermentation in the rumen.

Other than copper, molybdenum also has antagonistic relationships with sulphur and tungsten.  Hence, consuming too much sulphur, tungsten, or copper relative to molybdenum can deplete levels of this mineral and vice versa.  There is no essential role for tungsten in the body, but it has been used to treat disorders associated with molybdenum toxicity.

As you can see, the interaction of these various minerals in your body is complex.  To ensure you’re not consuming too much molybdenum in proportion to its antagonists, it’s critical to get your molybdenum from nutient dense whole foods!

What Food Are Highest in Molybdenum?

It’s also worth noting that molybdenum is depleted through the processing and refining of flour.  So you’re unlikely to obtain significant amounts of molybdenum from bread.

Irrespective of soil content, we’ve included some of the top high-molybdenum foods below.

A true molybdenum deficiency is rare, with only one case recorded in which a man was using total parenteral nutrition (TPN) long-term for Crohn’s disease in the 1980s.  He developed symptoms like tachycardia, tachypnea, headache, night blindness, and coma until doctors realised it was a deficiency and intervened.

Other than this rare case, the only other instances of molybdenum deficiency have occurred because of genetic disorders that prevent the body from using molybdenum properly.  Because molybdenum is involved in detoxification, symptoms arise immediately after birth and look like seizures and brain damage from the inability to remove harmful substances.  Sadly, someone born with this mutation often does not live long.

While diseases associated with molybdenum deficiency are not so prevalent, symptoms of inadequate molybdenum are somewhat well-known.  Because of its role in the detoxification of harmful substances, low molybdenum has been tied to smell sensitivity (i.e., perfumes, gasoline, cigarette smoke, and other fragrances), multiple chemical sensitivity (i.e., cleaning products, pollutants, chemicals), intolerance to sulphites in wine, and conditions relating to poor liver health.

Although molybdenum is well-absorbed, lower molybdenum levels can arise from:

Symptoms and Detriments of Excess Molybdenum

Just like we get problems if we under-consume a nutrient, we tend to get similar issues if we overconsume it.  Hence, the best nutrient intake is a lot like Goldilocks’ principle: not too much, not too little, but just right!

Molybdenum toxicity has been observed in populations that consume water high in molybdenum and foods grown in high-molybdenum soil.  For example, toxicity has been reported in some regions of Armenia where the molybdenum content of the soil is high, and people are stuck consuming ten to 15 milligrams (mg).  Note: the RDA is in micrograms (mcg), which is one-thousandth of a milligram!

Excess molybdenum consumption from food and water has been shown to cause gout-like pain, joint pain, high levels of uric acid, and reproductive issues.  In one case, a man who overused molybdenum supplements developed psychosis.

Based on animal models, experts have thus set the tolerable Upper Limit (UL) at two milligrams per day (2,000 mcg) from food or formula.  These studies demonstrated that reproduction and growth became impaired once this intake was maintained for some time.

Because of its role as a copper antagonist, molybdenum has been used in the form of tetra thiomolybdate as a therapy to address Wilson’s disease, which results from excess copper.

Currently, the Recommended Daily Allowance (RDA) is set at 45 micrograms (mcg) per day for adults over 19.  Remember, this is the amount required for 97.5% of the population to avoid deficiency.  However, it is estimated that the average male and female consume 109 and 76 mcg daily, respectively.

We tend to find minerals, vitamins, amino acids, and fatty acids that are critical for satiety clustered around one another in nutrient-dense foods.  In other words, it is rare that one food only contains one, two, or even three nutrients.  Instead, nutritious whole foods tend to be complexes of nutrients with synergistic effects, meaning molybdenum likely plays a role in satiety because it is a part of some of these foods.

2 thoughts on “Molybdenum in Food: A Complete Guide”