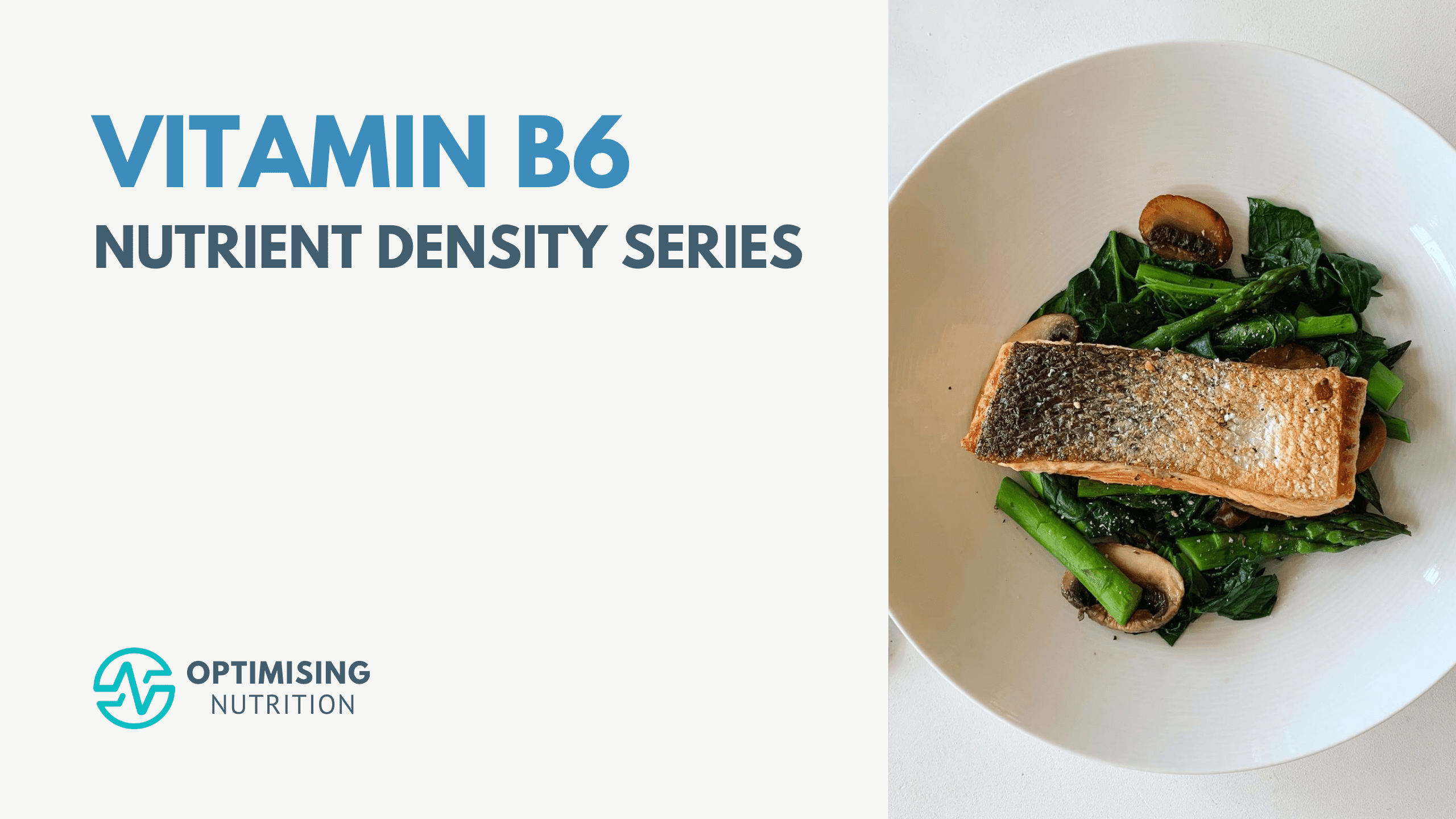 Vitamin B6 (aka pyridoxine) is an essential water-soluble vitamin your body requires for many critical functions.

The Benefits of Vitamin B6 (Pyridoxine) in Your Body

Vitamin B6 is found plentifully in both plant and animal foods. Although it is found readily in fortified foods, whole food sources provide plenty of vitamin B6.

Foods that contain more vitamin B6 include:

Check out more top foods high in vitamin B6 on Nutrient Optimiser for more detail.

Some examples of our NutriBooster recipes high in Vitamin B6 (Pyridoxine) include:

Symptoms of Pyridoxine (Vitamin B6) Deficiency

A deficiency of pyridoxine alone is rare in the western world. However, when deficiency of B6 appears, it is often accompanied by shortfalls in other vitamins like folate and B12.

Symptoms of vitamin B6 deficiency include:

Who is at Risk of B6 Deficiency?

Our satiety analysis indicates that we have a moderate response to foods containing more Vitamin B6. For example, the chart below shows that Optimisers who consume around 5 mg/2000 calories of vitamin B6 from food tend to eat around 20% less than those who consume fewer amounts of B6. However, as we can see in the chart below, simply adding more vitamin B6 from a supplement or fortified, processed foods to an otherwise nutrient-poor diet does not necessarily provide greater satiety.

Clinical deficiencies are seen with intakes of less than 0.5 mg/day of vitamin B6, but 1.1 mg/day is required to maintain long-term tissue stores of B6. Similar to protein, it is recommended that older people consume more vitamin B6.

The average vitamin B6 intake of Optimisers is 3.2 mg/2000 calories, which are significantly more than the Estimated Average Requirement (EAR) of 1.0 mg/day or the Dietary Reference Intake (DRI) of 1.3 mg/day.

Vitamin B6 is water-soluble. However, long term supplementation of very high doses of vitamin B6 (greater than 1,000 mg per day) for extended periods is known to result in painful neurological symptoms known as sensory neuropathy. An Upper Intake Level has been set at 100 mg/day for this reason.

Because specific vitamins and minerals work antagonistically to one another, consuming large amounts of isolated supplements like B1 (thiamine) can contribute to a deficiency over time. Hence, you should focus on whole foods for your vitamins and minerals because they include a complete profile of synergistic nutrients.

Based on the satiety response and our data analysis, we have set a stretch target of 5 mg/day for men and 4 mg/day for women for vitamin B6.

Availability of Vitamin B6 in The Food System

The data in the chart below illustrates the increase in vitamin B6 fortification during the 1970s (data from USDA Economic Research Service). However, there has been an overall decrease in B6 in the food system since the USDA Dietary Guidelines was introduced in 1977. It’s important to note that the rise of obesity closely follows the rise in dietary B6 from fortified foods.

Consuming enough B6 to meet the EAR is not hard if someone consumes either fortified foods or whole foods. However, you will need to go out of your way to achieve the DRI and the stretch target.

Studies have shown that the bioavailability of B6 in animal foods is much higher than in plant foods. About 75% the vitamin B6 is bioavailable on a mixed diet.

Vitamin B6 works synergistically with vitamins B1, B2, B3, B6, B12, C, E, biotin, chromium, copper, folate, leucine, magnesium, potassium, phosphate, selenium, sodium and zinc. For this reason, it is best to consume vitamin B6 from food sources that contain a more complete nutrient profile to avoid imbalance.

The nutrient fingerprint chart below shows that high levels of pyridoxine can be obtained from a nutrient-dense diet. Foods with vitamin B6 tend to have significant protein and lower fat content.

How Do I Calculate my Vitamin B6 Intake?

If you’re interested in checking if you’re getting enough vitamin B6 in your diet, you can check your nutrient profile using our Free 7-Day Food Discovery Challenge.