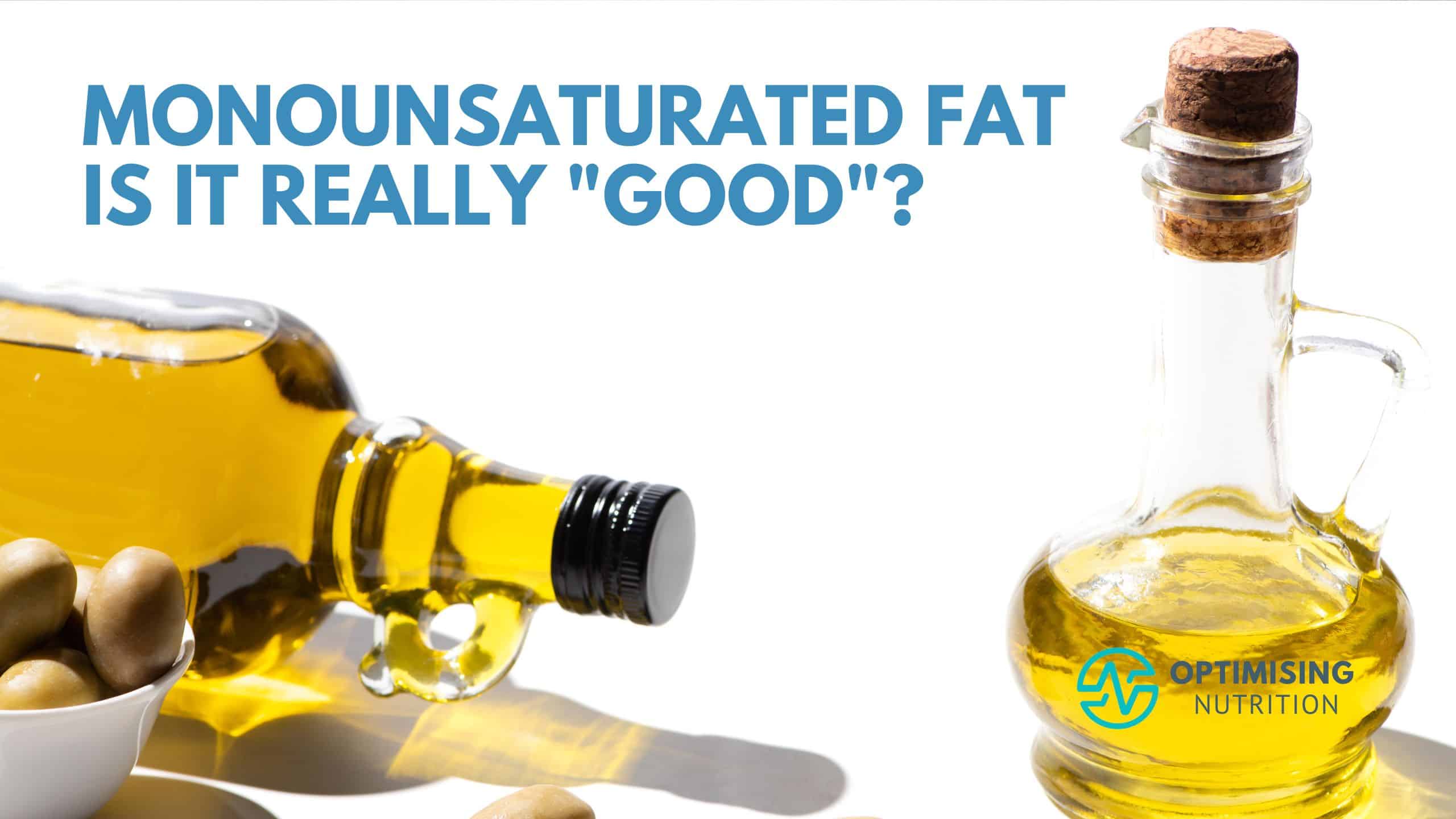 Monounsaturated fats are regarded by most as ‘good fats’ and ‘heart-healthy’.

Meanwhile, saturated fats are demonised and labelled as ‘bad fats’ that should be avoided.

Over the last century, our energy intake from fat has increased by around 700 calories per day, coinciding almost perfectly with our ever-growing obesity rates.

Maybe it’s time to stop and consider if we might be getting too much of a ‘good thing’.

In this article, we’ll look beyond the simplistic ‘good’ vs ‘bad’ labels to understand the relationship between monounsaturated fat, polyunsaturated fat, saturated fat, and other critical factors like satiety and nutrient density.

This article will give you a better understanding of how much of each fat you should consume to achieve your goals.

How Has Our Monounsaturated Consumption Changed Over the Years?

The chart below shows the change in calories from varying types of fat over the past century.  Also plotted are the US obesity rates, which have tracked eerily close to the extra calories from monounsaturated and polyunsaturated fats.

The following chart shows how the percentage of our total energy from polyunsaturated and monounsaturated fats has steadily risen, while saturated fat rose until the 1960s and then fell.

What Are Monounsaturated Fats?

From a chemical standpoint, monounsaturated fats are fat molecules with one (mono) unsaturated carbon bond, which forms a double bond.

However, recent research has proven this to be an inaccurate oversimplification.  The relationship between dietary cholesterol and blood cholesterol seems to be a bit more complex.

First and foremost, you have bigger problems to contend with if your arteries are at room temperature; you’re already dead!

But aside from this, cholesterol is an essential molecule necessary for human life.  We need cholesterol to build human tissues and synthesise cell membranes, bile acids, and hormones.

Whether you’re consuming dietary cholesterol or not, your body makes around 85–90% of the cholesterol it needs.  The rest tends to be absorbed from your food through the intestines.

Oxidative stress has been shown to impair cholesterol metabolism, and new research has also linked it to gut imbalances, poor methylation (which is a result of nutrient deficiency), and environmental toxins, in part from the food we eat.

Instead of simplistically blaming cholesterol, we might see more success if we begin to question why so much extra cholesterol is floating around the bloodstream.

Interestingly, while saturated fat is officially still considered ‘bad’, dietary cholesterol was removed as a nutrient of concern in the 2015 Dietary Guidelines after its ‘link’ to heart disease was dismissed.

Interestingly, our satiety analysis shows that cholesterol and omega-3 fatty acids are the two fats we appear to crave more of, as indicated by the fact that we consume fewer calories when we consume more of these fats per calorie.

Like saturated fat, cholesterol has decreased in our food system as our food production has become more industrialised.

For more detail, see Cholesterol: When to Worry and What to Do About It.

Which Foods Are High in Monounsaturated Fat?

The tables below list the proportion of energy and relative nutrient density (ND) scores from monounsaturated, saturated, and polyunsaturated fats for a range of popular foods.

The key thing to note here is that most whole foods contain a mixture of mono, poly, and saturated fats.  Also, as we will see later, foods with a higher % of energy from fat tend to have a lower nutrient density.

Although low-fat and plant-based proponents tend to advocate for monounsaturated fat, while low-carb and animal-based diet fans usually support saturated fat, the reality is that all food contains a blend of all three in variable amounts.

Even the form of vitamin E that is abundant in these oils usually isn’t optimal for the body!

Is Monounsaturated Fat Better or Worse than Other Types of Fat?

If you were to look at a snippet from Cronometer of a fat source — let’s say, olive oil — you would see there was little in the way of micronutrients like vitamins, minerals, and amino acids.

How Much Monounsaturated Fat Aligns with Weight Loss?

Next, we come to the topic you’re probably most interested in – satiety.

Unfortunately, the short answer is no.

There is no magical fat that you can eat more of to lose weight.

It’s not exactly clear why this occurs, but it may be because whole foods with a significant amount of saturated fat, such as cheese and meat, also contain protein.  We know from our satiety analysis that protein is the most critical nutrient for feeling full.

When your fat cells are relatively empty, your appetite increases, and you will be motivated to seek more food.  However, once you approach your Personal Fat Threshold and become insulin resistant, your appetite will settle because you can’t store more energy as efficiently.

To put it more simply, you become insulin resistant more quickly from overconsuming foods that are high in saturated fat.  Hence, satiety kicks in at a lower body fat level.  Meanwhile, unsaturated fats will keep you eating and gaining much more weight before you finally develop type 2 diabetes.

This does not necessarily mean saturated fat is better; it’s just something to be aware of.

Consuming more energy than you use—from any source! —will result in weight gain.   You don’t want to overdo your fat intake to the point that you drive yourself to become diabetic, but saturated fat might slow you down before you become morbidly obese.

Finally, as shown in the chart below, we also tend to eat more energy when our diet contains more polyunsaturated fat.

When we look at the satiety response to all three types of fat together, we see a similar response.

From this analysis, it’s hard to conclude whether one fat is better than another.  However, we see a clearer signal when we look at all fats taken together.

Reducing fat from 80 to 40% of calories aligns with a 28% reduction in energy intake!  Although fat is an excellent slow-burning energy source that often comes packaged with protein, it is the most energy-dense macronutrient.  Thus, it is the easiest to ‘leverage’ or increase or reduce to alter your overall energy intake to align with your goals.

What Is the Minimum Amount of Monounsaturated Fat?

To help you understand the possible range for each fat, the table below shows:

The table below is not intended to be used as a hard-and-fast rule or even a guideline; we just wanted to include it to show some of the ranges our data analysis suggested.  All values are in per cent of total calories.

How Do I Find the Right Fat Intake for Me?

Instead of demonising or prioritising fat, you may have more success finding the amount of dietary fat for you if fat itself isn’t your focus.  To find the right amount of fat for you, you can follow these simple steps:

Rather than micro-managing saturated vs mono vs poly fats, set the nutrient density of your diet as your highest priority.  Once you focus on what matters, the right fat ratios will fall into place.

We always see diet quality suffer if you demonise ‘bad’ components in food and non-sensical results.  A recent example of this can be found in our article Is Tufts University Food Compass Nutrient Profiling System ‘Broken’?

But if you’re getting plenty of nutrients from whole foods, you won’t need to micromanage ‘good’ vs ‘bad’ fats.  Instead, everything will fall into place without getting too much or not enough of anything you do or don’t require.

Which Fats Should You Avoid?

Since you’ve made it this far, you see that you probably don’t need to be afraid of any one fat, so long as it comes from whole foods that contain enough other essential nutrients.

While we like to romanticise the ‘heart-healthy’ Mediterranean Diet, the reality is we’re not all getting an extra 700 calories per day from eating too many avocados or walnuts or adding too much avocado oil or olive oil to our salads!  Right?

In truth, the massive increase in our fat intake has come predominantly from industrial seed oils such as palm, soybean, sunflower, and rapeseed are super cheap, high-profit-margin ingredients that manufacturers love adding to processed foods.   The following chart shows that our intake of these oils has increased by more than 800% over the past half-century!

It’s a convenient ‘coincidence’ that the US Department of Agriculture’s Dietary Guidelines gives them a ‘heart-healthy’ blessing while demonising saturated fats.

What Foods Should You Avoid?

Very few people are overdoing these refined oils by themselves.  How often do you get the urge to dump soybean oil on your salad?

While these unsaturated oils alone aren’t so appetising, they become a real problem when combined with refined flour and sugar in ultra-processed foods.

The ingredients list for the Oreo cookie shown below is a prime example.  Palm or canola oil is the primary ingredient after flour and sugar!

The following Cronometer screenshot shows the macro profile of 2000 calories of Oreo cookies.  We see they contain a blend of carbs and fat with minimal protein —the recipe for hyper-palatable junk food.

Now, look at the micronutrient profile for 2000 calories of Oreo cookies, which shows how terrible their nutrient density is.  Most of the nutrients they contain are from fortification!

While this might be disgusting and frightening to see, the problem is that Oreo cookies are not unique.  This formula of industrial seed oils + sugar + flour + flavourings +colours + synthetic fortified vitamins is the signature of most packaged foods in the centre aisles of our supermarkets and fast-food stores.

If you value your health, worry less about which types of fats you are getting in your meat and nuts.

Instead, avoid processed foods that contain substantial amounts of industrial seed oils as ingredients, and do it like your life depends on it.

You won’t need to be concerned about ‘good fat’ vs ‘bad fat’ if you rely primarily on nutrient density to determine whether a food is ideal for you.