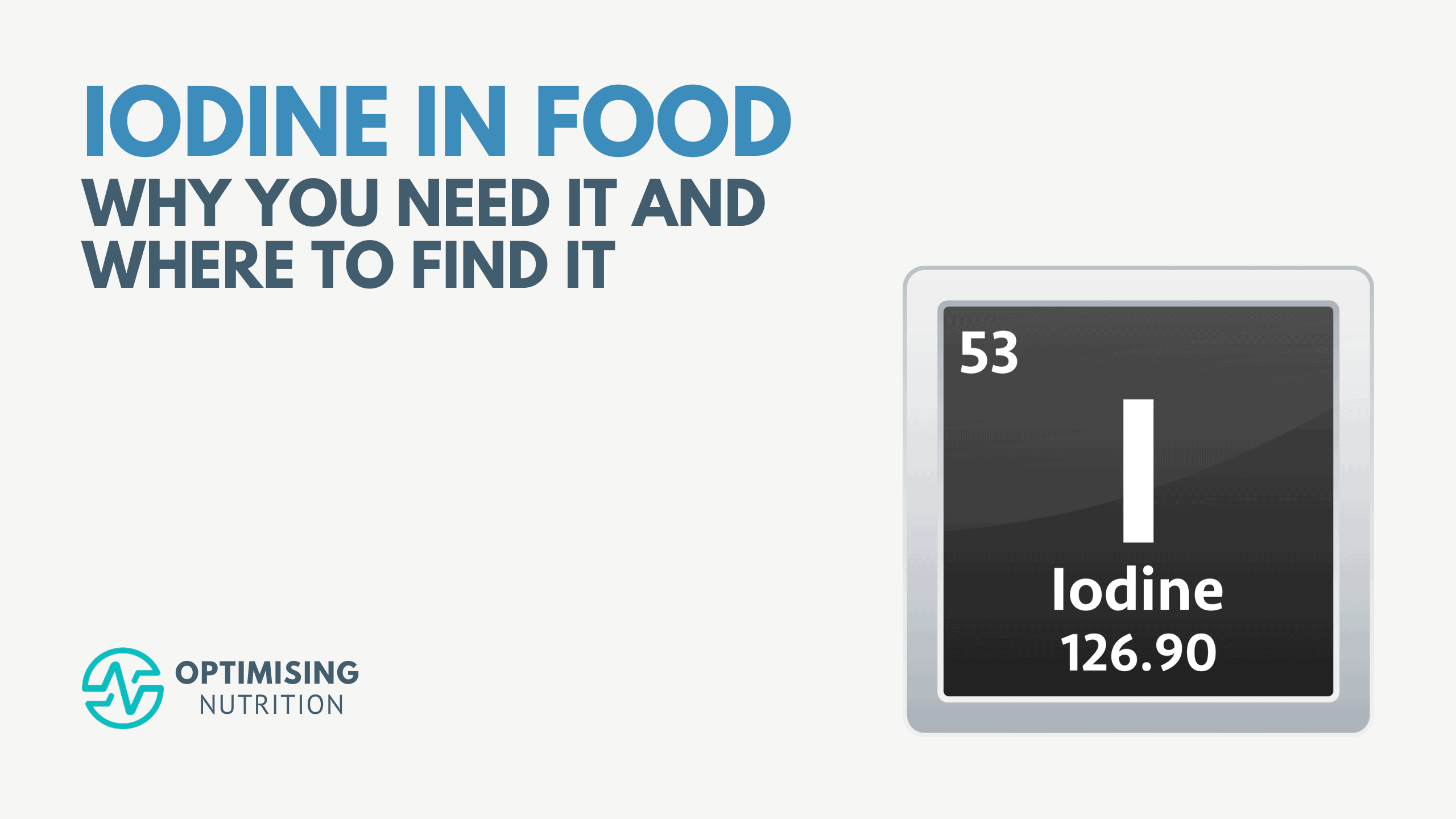 Fish, seafood, and other foods from the sea are often recognised as some of the most nutritious things we can eat.  Some of the longest-living and healthiest populations eat most of their calories from seafood.  So, what in it is so good for you?

Aside from omega-3 fatty acids, these foods are the only forms of naturally occurring sustenance that provide ample amounts of an essential nutrient known as iodine.

As you will learn from this article, iodine is critical for many bodily functions that drive human metabolism.  Without it, many critical processes do not happen, and the body can’t work efficiently or effectively.

Below, we’ll discuss the history of iodine, its roles in the human body, where you can find it, and how to know when you’re getting too little or too much.

In 1811, Bernard Courtois was extracting sodium salts while manufacturing gunpowder when he noticed a purple vapour emanating from seaweed ash he had just treated with sulphuric acid.  Unfortunately, he lacked the funding to keep researching what had just occurred, but he had thought he had just discovered a new element.

Two years later, Charles Desormes and Nicolas Clement made Courtois’s accidental discovery public; he had stumbled upon the element with the atomic number 53, which would be named ‘Iodine’.  Its name comes from the word ‘iode’, which means ‘violet-coloured’ in Greek.

In 1873, Casimir Davaine of France discovered that iodine was a powerful antiseptic, even at low concentrations.  Today, iodine is still used to sterilise pre-operation sites, wounds, and other injuries.  It has been used and continues to be used in the event of nuclear fallouts to protect the thyroid from radioactive damage.

Outside of medicine, iodine has some other pretty cool roles; it’s used to detect counterfeit money and is a component of polarised filters for LCDs, like the one you’re looking at right now.  It allows for more compact and efficient propulsion systems when used as a propellant for spacecraft like satellites.

Roles of Iodine in the Body

While iodine is a pretty cool element in technological applications, it’s arguably even more incredible because it keeps you alive!  Some of the critical functions of this essential mineral are listed below.

In foetal development, iodine is critical for forming the brain’s cortex and nerve connections.  Additionally, it’s essential for myelination, the process that results in the fatty covering and protection of nerves.

Iodine is found in concentrated sources in and around oceans; it originates in the sea and works its way into the soil.  Hence, aquatic beings like fish, shellfish, and seaweeds are the best sources, and mountainous and landlocked regions are the most deficient.  Lands once covered by oceans may have some iodine, but this nutrient is rapidly depleted by erosion.

Nonetheless, we’ve included some of the best sources of iodine below.

Iodine is one nutrient that largely depends on soil content.  This is why iodised salt is almost the only source of iodine for someone consuming a standard western diet.

Because of its role in thyroid function, iodine works synergistically with selenium, iron, vitamins A, C, D, and B vitamins, magnesium, zinc, copper, and tyrosine.  Consuming more of this nutrient complex tends to increase and ‘reinforce’ the functions of iodine.

In contrast, minerals like fluorine, chlorine, and bromine tend to antagonise iodine; while these nutrients aren’t essential, they’re widespread in our environment.  Additionally, certain antinutrients known as goitrogens can antagonise the absorption of iodine, decreasing levels over time.

High-goitrogen foods include cruciferous vegetables, cassava, soy, beans, sweet potatoes, collards, kale, mustard greens, rapeseed, rutabagas, and turnips.  However, goitrogens are easily destroyed by high-heat cooking methods.  Usually, these foods are problematic for someone who relies on them as staples or someone with a pre-existing thyroid condition.

You only need to worry about nutrient synergism and antagonism if you are supplementing with nutrient isolates or you are eating a LOT of one food that’s very high in a few vitamins, minerals, amino acids, or fatty acids.  On the other hand, if you consume a nutrient-dense, varied diet, these properties tend to look after themselves.

You will need more iodine if you have breast cancer, diarrhoea, excessive carbohydrate intake, obesity are pregnant, have a goitre or consume a lot of goitrogen rich foods (like cabbage, turnips, Brussesls sprouts and cassava).

The thyroid gland needs no more than 70 micrograms per day of iodine to synthesise T4 and T3.  However, this only makes up a portion of what we require iodine for; it is also necessary for the many roles we explained above and to nourish an infant via breastmilk.

Nonetheless, the US Recommended Daily Intake for iodine is 150 micrograms in adults over 19.  However, this need nearly doubles during pregnancy and lactation, with the RDI climbing to 220 micrograms and 290 micrograms, respectively.

Unfortunately, because iodine in food is so variable depending on where it’s grown, it is often not tracked in food databases.

Even 5600 years ago, the harms of iodine inadequacy were well known; Chinese medical writings from this time document goitres decreasing in size after consuming seaweed and burnt sea sponge!

It’s estimated that 2 billion globally are deficient worldwide, with 45% of the European population not getting enough.  To complicate things further, it’s estimated that a pregnant or breastfeeding woman’s needs increase by almost 50%.

Severe physical and mental retardation, known as cretinism, can also result from deficiency, especially if iodine is deficient during development.  Because iodine is critical for nervous system development, iodine deficiency in pregnant mothers, babies, and infants is the most widespread but preventable cause of brain damage.  Iodine deficiency in pregnancy can also result in mental retardation as well as miscarriage, preterm birth, and neurological impairments.

Iodine deficiency is usually diagnosed by testing the urine.  We pee out 90% of the iodine we consume within 24-48 hours of consumption.  Thus, administering a higher dose and measuring excretion can indicate whether or not deficiency is present; someone that retains a lot of it needs more, and vice versa.

Many studies on iodine toxicity point out that the condition often results from supplementation, not food.  Additionally, the form of iodine tends to matter; radioactive iodine, those used in contrast dyes, and certain supplement forms are unnatural, and the body does not manage them well.  Conditions like thyrotoxicosis also tend to result if someone loses the ability to handle excess iodine, like when they’ve been deficient for a while.

Iodine toxicity has been shown to present itself as:

If you are using an iodine isolate, it’s essential to supplement under a knowledgeable individual’s care.  If you have thyroid antibodies—or autoimmune thyroid disorders run in the family—too much iodine, especially in the form of potassium iodide, can trigger or exacerbate autoimmune thyroid disease.  Additionally, if you have an ‘iodine allergy’, it’s best to be cautious when using iodine supplements or high-iodine foods.

In the 1910s and 1920s, there was an epidemic of iodine-deficient-related thyroid disorders throughout the United States.  Soils of most flooded river valleys, inland regions, and mountainous regions like the Appalachians, Alps, Atlas, Andes, and the Himalayas are often deficient in iodine.  Hence, the US ‘goitre belt’ was hit by relentless iodine deficiency during this time.

In 1922, Dr David Cowie of the University of Michigan proposed fortifying table salt to prevent goitre.  This led to the release of the first iodised salt product in 1924.  Many countries that also struggled with low iodine intakes followed suit, with India making it available in the 1950s and China in the 1960s.  Around 120 countries now have formal fortification programs.

To date, 80 to 90% of households have access to iodised table salt worldwide.  Since the fortification of salt began in the US, a 2013 study showed that the IQ of iodine-deficient regions increased by nearly 15 points since introducing iodised salt and 3.5 points nationally.

Iodine has a heavy atomic mass, meaning its abundance tends to decline with time.  Additionally, humid and high-temperature climates can accelerate the decay of iodide, the form found in table salt.

Iodine in Food vs Iodine in Supplements

There are many different conditions related to ‘iodine toxicity’.  So, why can some populations consume high amounts, but others cannot?

Iodine is one of the many nutrients for which cofactors matter, as its metabolism depends on other nutrients, like selenium.  In one study looking at the effects of selenium on iodine toxicity, it was shown to alleviate the symptoms of iodine excess.

The takeaway from this finding is that it’s best to get your iodine—and any other nutrient, for that matter—from food and to avoid taking supplements as much as possible!

Food provides the complete spectrum of iodine cofactors like vitamins A, C, D, and B vitamins, magnesium, selenium, zinc, copper, tyrosine, and other nutrients that support iodine metabolism.  As a result, it’s much harder to overdose on iodine from food!  It’s also much easier to get the complete complex of nutrients your body requires to function optimally.