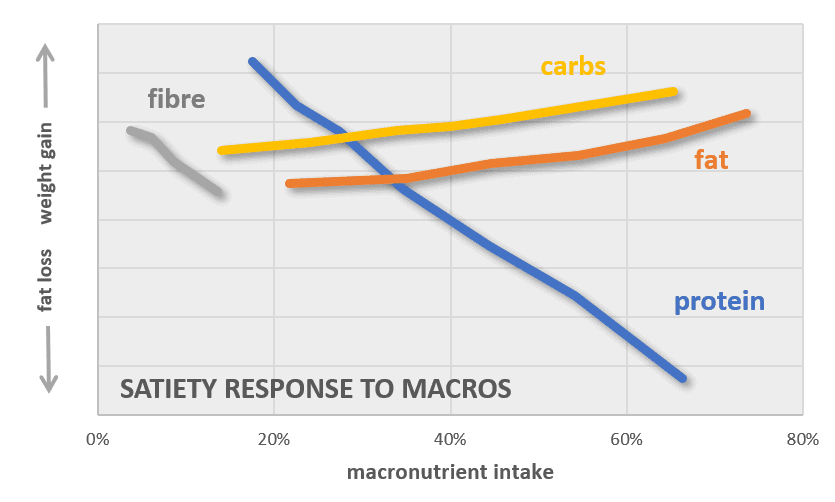 Each of the different macronutrients (i.e. carbs, fat, protein, fibre and alcohol) has a unique impact on satiety and causes us to eat more (or less) than we may like to.

This article details the findings of our data analysis of forty thousand days of food logging data from more than a thousand Optimisers and identifies targets if your goal is to lose fat or gain weight.

Welcome to the second part of our series looking at the key factors that influence satiety and how the type of food you eat will affect how much you eat.

Following on from our first article looking at protein, this article looks at the satiety effect of fibre, carbs, fat, energy density, alcohol and water.

As shown in the chart below, people who consume a higher percentage of fat in their diet tend to eat around 15% more calories compared to those who costume less fat.

This observation aligns with our MyFitnessPal satiety analysis, which showed that once we separate fat from protein, fat as a macronutrient is not particularly satiating.

The observation that higher fat foods tend to have a lower satiety response aligns with Holt laboratory satiety data.

While fat is an excellent slow-burning fuel source and great for storage, our satiety analysis of data from three different sources indicates that it appears that consuming ‘fat to satiety’ is dangerous if your goal is fat loss from your body!

While there is plenty of debate around carbs vs fat, carbs don’t get a free pass either.

However, we need to keep in mind that this data is taken from people who are typically following a lower carbohydrate dietary approach.  The average carbohydrate intake of Optimisers is 15% (compared to the average population intake of 44%). So we can’t rely too much on the data to the very high carb end because there were not a lot of people following a very high carb diet.

In our satiety analysis using MyFitnessPal data, we found that a very low-fat high carb (i.e. greater than 60%) diet is hard to overconsume.  However, few people maintain a diet of greater than 60% carbohydrates.  Most of the time, we gravitate to a mixture of carbs+fat between the two extremes that minimises satiety and allows us to consume more food.

The laboratory data from A Satiety Index of Common Foods (Hold, 1995) also indicates that a high carbohydrate intake without fat (e.g. plain rice, fruit, potatoes) tend to be more satiating than foods that are a mixture of carbs and fat.

It seems thinking in terms of reducing has an even more significant impact on satiety!

Rather than avoiding all carbohydrates, a good rule of thumb to manage your hunger seems to be to avoid foods that are combinations of fat and carbohydrates.  These foods are rare in nature but basically the formula for modern processed junk food.

While fibre does have a positive impact on satiety, it’s small compared to protein.  There is no real need to go out of your way to prioritise extra fibre if you are following a nutrient-dense diet.

Not many people can push their fibre intake to levels that correspond with a significant increase in satiety (i.e. greater than 10%).

Heavier foods with more water and fibre and fewer calories are harder to overconsume.  Our analysis of data from Optimisers indicates that energy density correlates strongly with lower energy intake.  People who eat foods that are less dense eat around half as much as those who eat the most energy-dense foods and meals.

However, we tend to gravitate towards denser foods.  Similar to fibre, not many people sustain a lower energy density that leads to improved satiety. Practically, it’s challenging to consume a diet with a low enough energy density that will have a meaningful impact on satiety.

When we have a little alcohol, we tend to eat a lot more. This is likely due to reduced inhibition and self-discipline.

However, if alcohol makes up a substantial proportion of your energy intake, you may eat fewer calories than if you drink only a little.  It’s hard to know though whether this is due to the higher oxidative priority of alcohol driving increased satiety or due to nausea/passing out!

Before Atkins, there was The Drinking Man’s Diet which consisted of eating nothing but steak while drinking a bottle of wine a day. It seemed to work for weight loss (plenty of protein for satiety).

However, intentionally trying to get a lot of your energy from alcohol would be questionable in terms of nutrient density or the ability to hold down a day job if you were always drunk and/or hungover. The calories from alcohol can add up quickly and because alcohol is so volatile and you have nowhere to store it, they need to be burned off before everything else you eat.

But because it doesn’t contain calories, people don’t tend to log their water. But they do log their lattes, sodas and alcohol. The chart below shows that caloric beverages don’t register much of a satiety response.

Although fruit and vegetables tend to be bulky and hard to overeat because they have a lower caloric density, sodas and juices will NOT help you stay full or within your caloric target. Calories from drinks can add up very quickly.

The take-home message here is that you should chew your food and drink your water.   Minimise drinks that contain a significant amount of calories if your weight is important to you.

To bring all this together, the chart below shows the satiety response curves for fibre, carb and fat together with protein. Fibre has a small positive impact on satiety, while fat and carbs are negatively correlated.  The most dominant factor by far is the percentage of your calories from protein, which has the most significant potential to influence how much you eat.

To help you put this into practice, the table below lists the various factors that affect satiety ranked from largest to smallest effect.  Also included are:

If your goal was to improve satiety, eat less and lose weight you could:

In line with this analysis, in our 6 Week Nutritional Optimisation Masterclass, we guide people to progressively dial in their macronutrients to achieve their goals based on their biometrics (i.e. weight, body fat, blood sugars and lean muscle mass).

After four years of digging into the theory, we’ve created some exciting tools to help you implement the theory. We’d love you to check them out!

In our next article in this series, we’ll be looking at how the various fatty acids (i.e. cholesterol, omega 3, polyunsaturated, monounsaturated and saturated fats) drive you to eat more or increase your satiety and help you to eat less.