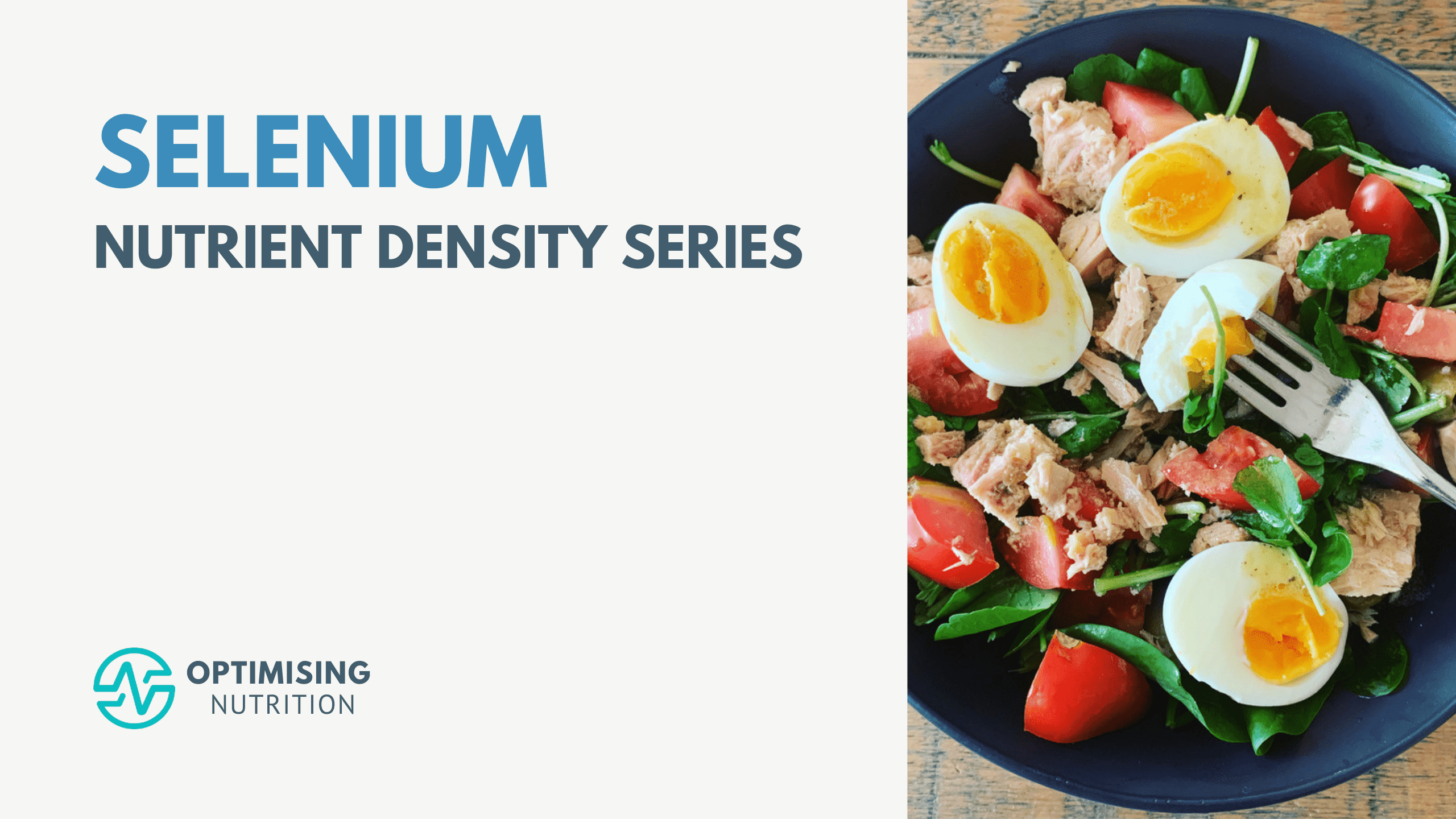 Selenium is an essential trace mineral that is only needed in minute amounts.  However, this trace element is small but mighty.

What is Selenium Good For in the Body?

Because of its role as an antioxidant, selenium has been shown to prevent heart disease and cognitive decline, minimise asthma symptoms, and support the immune system.

Fortunately, selenium is usually found readily within the soils, so plants and animals can get enough to selenium-rich foods for human consumption.  As a result, selenium foods are scattered throughout the plant and animal kingdoms, although they’re most abundant in foods from the sea.  Here, it is usually found alongside its synergist, iodine.

Although selenium is found consistently in seafood, it is found in its highest concentration in Brazil nuts.  This makes it easy to get selenium if you’re following a vegan or vegetarian diet.

Other popular selenium-rich foods are listed below.

Check out the top foods high in selenium at Nutrient Optimiser for more detail.

Some examples of selenium-rich NutriBooster recipes include:

What Are The Symptoms of Selenium Deficiency?

A lack of selenium is associated with:

Factors That Increase Demand For Selenium

You may need more selenium if you’re:

This is significantly greater than the Estimated Average Requirement of 50 mcg per day and the Recommended Daily Intake of 70 mcg per day for men.  In addition, the recommended minimum intake of selenium for pregnant women remains set at only 60 mcg/day and 70 mcg/day for breastfeeding women.

Although selenium is required for health, high doses of selenium can be toxic and even fatal.  To avoid toxicity, an Upper Intake Level of supplemental selenium has been set at 400 mcg/day.

If you’re getting too much selenium in your diet, you might experience GI upset, hair loss, nausea, breath that smells like garlic, a metallic taste, skin rashes, lesions, fatigue, irritability, and muscle tenderness.

Although selenium toxicity is often achieved by taking supplemental selenium, eating too many selenium-rich foods like Brazil nuts too frequently can result in toxicity, too.  More is not always better!

Availability of Selenium in the Food System

In certain parts of China, where large proportions of the population are vegetarian and soil selenium levels are low, inhabitants have one of the most inadequate selenium intakes.  These selenium-deficient areas correspond to a 69% higher risk of thyroid disease.  Average selenium intakes are also low in some European countries.  The risk for deficiency increases significantly in populations following a vegan diet.

The selenium content of foods generally available will provide you with enough of this mineral to meet the Recommended Daily Intake of 44 mcg/day.  However, you will still need to prioritise nutrient-dense foods to meet more optimal levels. As we can see in the chart below, selenium content in our food system declined over the past century until selenium fortification ramped up in the mid-1970s (data from USDA Economic Research Service).

Selenium is not a one-person show.  Instead, it works synergistically (or together) with vitamins B3, C, E, cysteine, glutathione, methionine, zinc, and iodine.

For this reason, it’s best to eat foods containing selenium because they often have a complete vitamin and mineral profile.  In contrast, supplements are usually in isolated form.

The nutrient fingerprint chart below shows that we can obtain plenty of selenium from a nutrient-dense diet.

Because selenium is found most abundantly in seafood and animal foods, a diet with more selenium will have a significant amount of protein and carbs than fat.

How Can I Calculate my Selenium Intake?

If you’re interested in checking if you’re getting enough selenium in your diet, you can observe your nutrient profile using our Free 7-Day Nutrient Clarity Challenge.