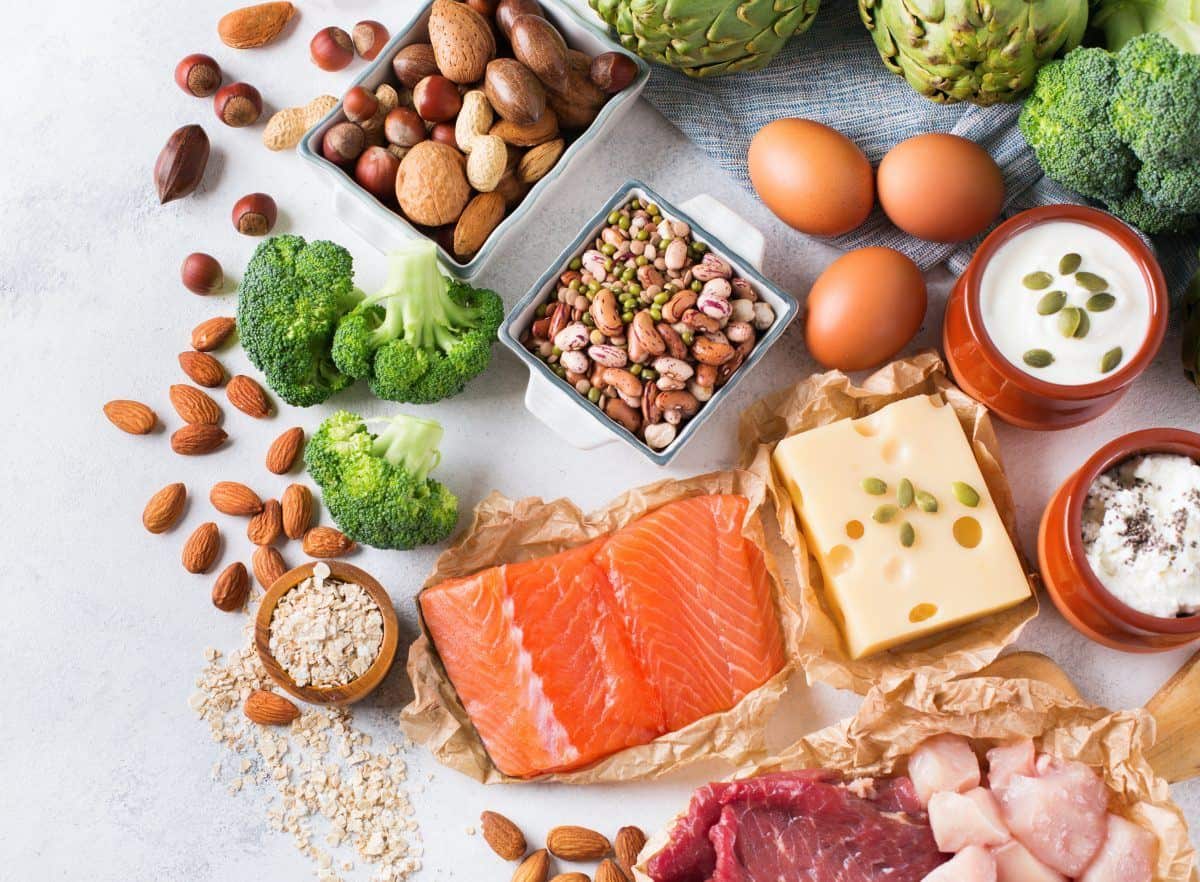 While many people are familiar with vitamins and minerals, most of us don’t give much thought to the individual amino acids that make up protein.

Following on from the analysis of the essential vitamins, minerals and fatty acids, this article looks at our satiety response to the individual amino acids to determine optimal stretch targets that will maximise benefit in terms of health and satiety.

Each of the amino acids have important and distinct functions in your body. The table below shows the minimum levels set by the World Health Organisation (WHO) for the individual amino acids to prevent deficiency.

If you’ve been keeping up with this series, you’ll be aware that we have a powerful satiety response to a higher proportion of energy from the protein in our diet.

The average protein intake of Optimisers is 28%, while the 85th percentile intake is 40%.  There is a wide distribution of protein intake represented in the data.  Very few people are consuming less than 10%, while at the other extreme, only a handful of people are getting more than 50% of their energy from protein.  If you are looking to lose weight by increasing satiety, you could aim for a stretch target of 40% protein.

It’s difficult for most people to consume a protein intake of greater than 50% for long as our appetite for easy energy from carbs and fats kick in. Our nutrient density analysis of different diets also indicates that once we go over 50% protein nutrient density starts to decline. So, unless you’re doing a short term Protein Sparing Modified Fast there’s not much benefit in trying to push protein beyond 50% of calories.

Before we go on, it’s important to highlight that it’s not just a matter of consuming more protein in absolute terms. As shown in the chart below, simply eating more protein tends to align with a higher energy intake.

The satiety benefit comes from reducing the fat and carbs in your diet which will increase the percentage of protein in your diet.

To think of it another way, it’s about manipulating your protein to energy ratio.

The charts below show the satiety response to the individual amino acids, along with:

In a few cases, you will notice an inflection point where a higher intake does not provide significantly more benefit.  Where this is the case, we have used this to define our stretch target. Where there is no distinct change, we have set the stretch target to align with the 85th percentile intake of Optimisers.  This will be a challenge, but still achievable with food.

The charts below are accompanied by a brief description of the function of each of the amino acids.  If any of the benefits or deficiency conditions are more important to you, you could focus on achieving the stretch target for those particular amino acids.

Cystine is required for the synthesis of insulin, skin, hair, biotin, glutathione, taurine and sulphate.  It also helps with the detoxification of chemicals and has antioxidant properties and lowers insulin resistance.

A lack of cystine is associated with poor immune function, aging, cancer, a decreased ability to process drugs and toxic chemicals, and poor wound healing.

Your body uses histidine to regulate and use iron, copper, molybdenum, zinc, and manganese.

Lysine is a necessary building block for all proteins in your body and plays an important role in calcium absorption.

Lysine is essential for muscle growth and is used to form carnitine, which helps transport fats across your cells to be used for energy.

A deficiency of leucine is associated with anemia, fatigue, poor concentration, loss of bone calcium, tiredness and infertility.

While we don’t have data from Optimisers on glycine, it is worth a mention as a conditionally essential amino acid that is contained in connective tissue.

It’s crucial to get adequate glycine to balance your methionine intake.  Glycine provides a range of benefits, including sleep and improved skin.  It’s also has a sweet taste, so it can be used as a sugar replacement in their drinks.

Threonine supports cardiovascular, liver, nervous system, and immune system function.  It also plays a role in the formation of tooth enamel, collagen and elastin in your skin and is a precursor to glycine.

A lack of threonine is associated with confusion, digestive issues, agitation, fatty liver and depression.

Tryptophan has a powerful initial satiety response that levels out once you get more than around 2 g/2000 calories.

Tryptophan is a precursor of niacin, melatonin (which helps you sleep) and serotonin (which makes you happy). Tryptophan also suppresses sweet cravings and appetite.

Tyrosine improves cognition and working memory under stressful conditions, improves exercise tolerance in heat, and is a precursor to thyroid hormones.

The chart below shows the satiety response curves for all the individual amino acids combined.  Generally, the amino acids tend to behave as a group with a similar response. To the right of the chart, we see lysine and leucine, which make up a large proportion of the amino acid intake.

Zooming in on the smaller amino acids (i.e. excluding lysine and leucine), we see that we get more of a “bang for buck” satiety response from cysteine, methionine, and phenylalanine, while we reach a minimum effective dose-response for tryptophan, histidine and threonine.

While all of the amino acids are important, you are likely to be getting enough of all of them if you are consuming an omnivorous diet with adequate protein (i.e. at least 1.4 g/kg LBM).

Repeatedly we find that if you are getting the vitamins, minerals and essential fatty acids from your food you will be getting plenty of protein and the individual amino acids. When people run analyse their diet with Nutrient Optimiser they rarely find that they need to prioritise amino acids (unless they are intentionally following a strict plant-based diet).

However, if any of the conditions associated with each of the amino acids may resonate with you so you may choose to initially focus on a couple of amino acids.

The stretch targets that align with greater satiety are around six times the recommended minimum levels to prevent deficiency!

If your goal is to achieve optimal health (rather than just avoiding diseases due to nutrient deficiencies), you should initially refine your diet to hit your minimum protein target protein intake (which can be calculated using the Nutrient Optimiser Free Report).

Once you can routinely achieve your protein target, you can enter these amino acid stretch targets in Cronometer and work to level up your nutrient density using Nutrient Optimiser.   The example below is for a male (assuming 2000 calories per day).

You can then track the individual amino acids in Cronometer to see whether you are meeting the stretch targets. In the example below, we can see that we could focus on getting more histidine and lysine (i.e. the amino acids shown in yellow, not green)

In our next instalment, we’ll summarise the optimum nutrient intake levels for all of the essential nutrients.