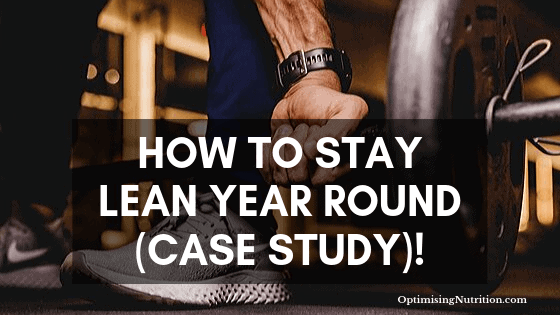 I recently came across a couple of interviews with Ivan Gavranic, who managed to get ripped and stay lean year round!

Not many people see less than 5.9% on a DEXA scan, let alone be able to maintain weight loss!

While this is probably not something you want to try to achieve, I thought it was a fascinating snapshot into what it takes to achieve and maintain INSANE body composition.

Ivan’s interview with Able Csabi of Sustainable Self Development fascinating.

So I stalked Ivan on Facebook.  Ivan accepted my friend request, and we got chatting.

I thought it would be fascinating to analyse Ivan’s diet to see what had enabled him to successfully get to such incredible levels of leanness and stay there!

There are no secrets to extreme fat loss.

If you read on, I can’t guarantee you’ll read anything you haven’t heard before.

The reason that most people don’t achieve it is that they’re not willing (or able) to exert the discipline that people like Ivan has.

Ivan has masted some fundamental techniques, made them into habits and stacked them together to practice them EVERY SINGLE DAY!   And by practising these habits consistently, he has managed to achieve what the rest of us just talk about achieving!

While you probably don’t want to get this lean, many of us want to drop some body fat, and I think there are some useful insights to be gained from Ivan’s lifestyle habits and diet.

Ivan is a 30-year-old personal trainer from Perth Australia.  He didn’t want to do a bodybuilding show to prove anything to anyone, but he wanted to walk the talk and walk the road that he has to take his clients through and just wanted to see if he had what it took to get VERY lean.

Over the last few years, Ivan had managed to get VERY strong, with more than 500 days of progressive overload training! But he got to the point that he figured he didn’t want to gain any more muscle.  His joints were starting to get sore, and the recovery was hard. He also changed his focus to more gymnastics rather than strength. It suited him better to be lean rather than jacked.

Ivan is happily single and a self-confessed introvert who doesn’t much like parties and doesn’t need a lot of attention from others.   He just gets a LOT of satisfaction from being able to control his body and feels great at this level of leanness.

Ivan is definitely an early to bed, early to rise sort of dude.  (His schedule makes me look like a night owl!)

In bed by 7 pm, he’s up at around 1 or 2 am.  He spends 20 minutes or so on the indoor bike until he needs to go to the toilet and then gets out on the bike to hit the tarmac for an hour or two.

After an early breakfast, he’ll get out and go for a long walk before sunrise while he listens to podcasts (he makes sure he gets in 20,000 steps per day) and then sees his personal training clients for the morning.  In the afternoon, he does around an hour of gymnastics to build up strength and skill.

After lunch, he writes programs for his clients and trains other PTs before hitting the sack around 7 pm again to start it all over again.

Like most introverts, Ivan has a few good friends, but they understand his routine, and they work around that.  While it may not be your cup of tea, you can hear in his voice that Ivan loves his lifestyle!

What does he eat?

During the cut, Ivan followed a routine where he ate the same thing every day to manage decision fatigue.

Partway through his cut, he ran his daily diet through Cronometer to check that he was covering off on his micronutrients and added a few extra things (potato with skin and organ meats) to boost nutrient density.

Ivan shared his daily cutting diet in MFP below.

Because of his massive daily level of exercise, he’s able to drop fat on 2300 calories per day, which would be a lot for many people towards the end of an extended cut.

One of the key things to note here is that Ivan’s cutting diet has a very low energy density.  This is a critical component of satiety. He was eating 2.3 kg of food every day!

His energy density is 100 calories per 100 gram of food which aligns nicely with the most nutrient-dense foods as shown in the table below from the Should You EAT Lancet? article.  If you wanted to maximise satiety one calorie per gram of food would be a pretty reasonable target.

The table below shows the energy density of the foods in his current diet (calories per gram) ranked from lowest to highest.  If he was looking to improve satiety, he would reduce the foods towards the bottom (olive oil and peanut butter) while increasing the foods towards the top (mushrooms, spinach, etc.).  The foods toward the top of this list are not only nutrient-dense, but they are very tough to overeat, which is ideal for managing hunger in an energy deficit.

The other thing to note here is that he’s getting a substantial amount of protein (i.e. 188 g per day, 2.8 g/kg Lean Body Mass or 2.5 g/kg Body Weight).  This is critical to optimising your satiety in a calorie deficit.

When we look at his micronutrient profile, we see that it would be nice if Ivan could get more vitamin D, omega 3, calcium, sodium, folate, copper and magnesium to further maximise the nutrient density of his diet.

When I mentioned this to him, Ivan added here that he does make sure he gets plenty of sun (20,000 steps per day, mainly walking outside with his shirt off) so he is getting his vitamin D from the sun.  (While you can get some D from your diet, you need sun exposure to get enough vitamin D.)

Ivan also takes liquid fish oil to boost his omega 3 and noted that his diet already has more potassium than most people are getting (which is true).

The foods that provide the least nutrients that Ivan needs more of are:

These would be the first foods he could consider dropping to make room for more nutrient-dense foods.

The table below shows Ivan’s micronutrient balance, indicating that his omega 3:omega 6 ratio is low, high iron to copper ratio is low and his calcium:phosphorus ratio is low.

The meals listed below from the Nutrient Optimiser will give Ivan more of the nutrients he’s getting less of while maximising nutrients density.

Since finishing his cutting phase, he has added about 1.3 kg (pretty much nothing, water weight only) from his lightest weight.  The good news though is that he’s been able to increase his calorie intake to 3,100 calories per day in maintenance, but still with the same level of cardio exercise that he still enjoys.  Ivan’s current maintenance diet from MFP is shown below. The fascinating thing here is that even in maintenance, he eats the same thing every day, and his ‘meals’ are quite similar across the day.

It’s interesting to see his protein intake has actually come down a little bit to 178 g per day (i.e. 2.2 g/kg LBM or 2.4 g/kg BW) which is fine because he’s looking for more energy rather than trying desperately to preserve muscle mass in a deficit.

Ivan’s maintenance diet micronutrient profile is shown in the chart below.  While it has a lower overall nutrient score (in terms of nutrients per calorie), it has more nutrients (and a higher Cronometer nutrient target score of 95%) because he is taking in more calories.

If Ivan was looking to boost his micronutrient score, he should prioritise omega 3, vitamin D, potassium, copper, sodium, zinc, magnesium and selenium.

The table below shows that Ivan still has some nutrient imbalances that would be nice to correct by adding some new foods and meals.

Even on Ivan’s maintenance diet, he’s eating 3.3 kg of food and still around 1.1 calories per gram of food.  The table below shows Ivan’s foods ranked in terms of nutrient density. If he wanted to improve satiety and reduce energy density, he could look to remove some of the foods towards the bottom.

To rebalance his micronutrient profile, Ivan could try adding some of the foods below.

The meals listed below will also help maximise his nutrient density score while still maximising satiety.

How to get ripped and stay lean year round?

Make sure you grab your Nutrient Optimiser Free Report to see your recommended macros, foods and meals to suit your goals.  If you have a few days of your diet logged it will also give you a detailed analysis to make sure you are getting the macronutrients you need to prevent cravings and have your macros dialled in to maximize your satiety.

A few months after writing this I touched base with Ivan again before I hit publish.