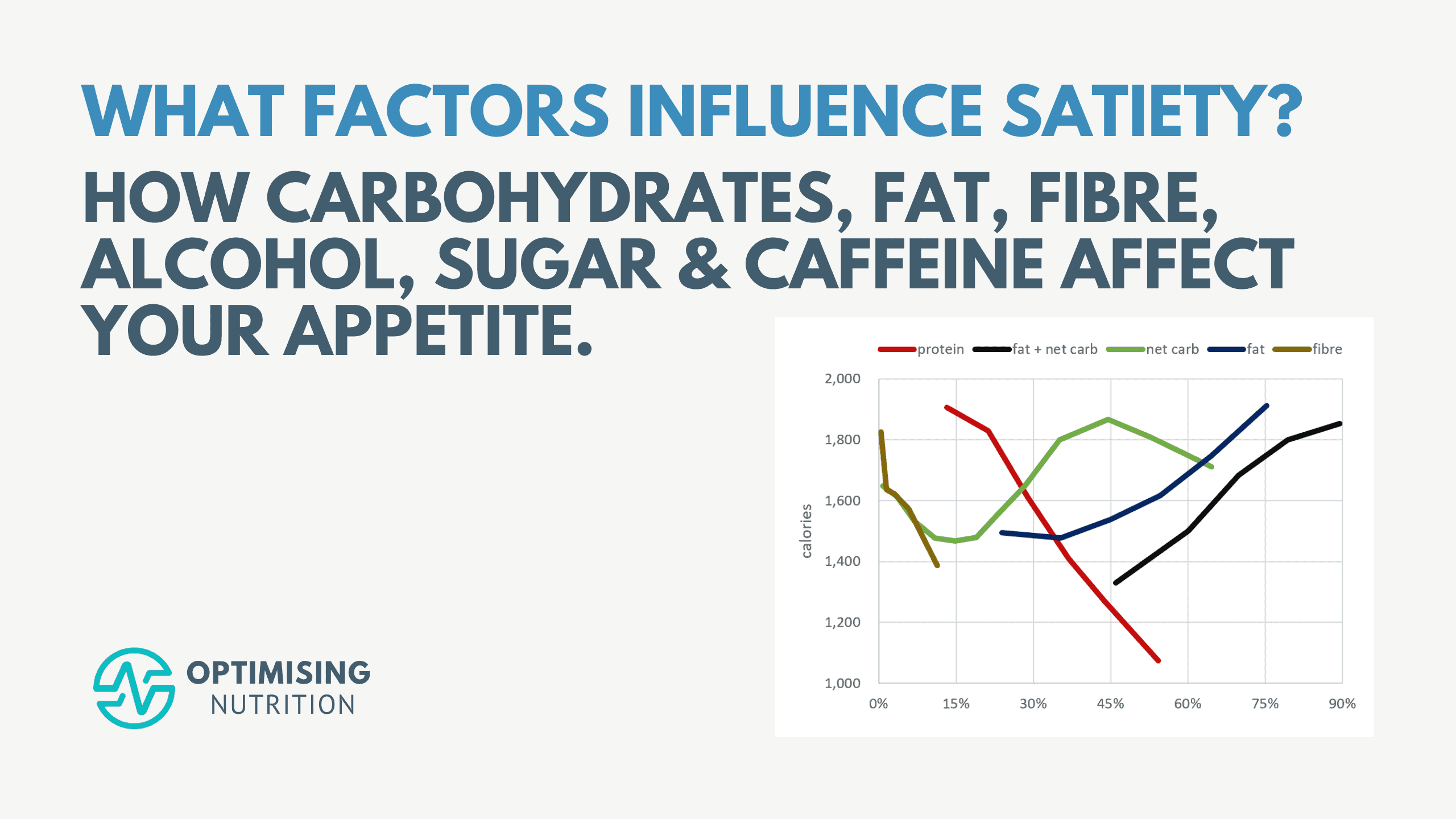 There is seemingly endless debate over whether carbs or fat are better or worse than one another, not to mention sugar and alcohol.

Previously, we’ve shown that protein % has the most significant positive impact on satiety.  That is, we tend to eat less when we reduce energy from fat and carbs and increase the percentage of our calories from protein.

In this article, we’ll look at the relative satiety and nutrient density impact of:

To help bring some clarity to this discussion, we’ve been on a five-year quest to bring a data-driven resolution to these never-ending arguments.  We now have a unique dataset of 125,761 days of food logs from 34,519 people using Nutrient Optimiser over the past four years that, as you will see, provides valuable insights to answer these contentious questions.

As you will see, what makes us eat more than we need is not carbohydrates OR fat, but rather carbohydrates AND fat combined in processed foods, which is very rare in whole foods.

The information in this article will empower you with the insights you need to fine-tune your targets for these nutrients to reach your goals.

Do Carbohydrates Make You Fat?

The chart below shows the relationship between the proportion of carbohydrates vs calories intake from our analysis of our data from Optimisers showing that:

How Has Our Intake of Carbohydrates Changed?

The chart below shows how the availability of dietary carbohydrates has changed over the last century.  Looking at the increase in carbohydrates between 1960 and 2000, you might think carbohydrates caused obesity.

However, over the past century, we can see that the availability of carbs has dropped and then risen to a similar point.  So, while carbohydrates certainly contribute to your calorie intake, they don’t appear to be the singular smoking gun driving the obesity epidemic.

Many people treat fibre as an essential nutrient.  But it’s not.  Many people survive just fine on minimal fibre.  In fact, many people with chronic gut distress find they do better with less.  However, if you’re eating carbs, it’s ideal if they’re minimally processed and more fibrous.

The following chart shows the satiety response to fibre, showing that:

Our analysis has also shown that foods that are more fibrous also tend to contain more nutrients like copper, iron, vitamin C, potassium and calcium.

But you don’t necessarily have to eat MORE fibre to get the satiety benefit.  Instead, it’s more important to ensure the carbohydrates you eat are more fibrous and less processed (i.e., non-starchy vegetables rather than sugar and refined flours).

As shown in the chart below, we eat 20% fewer calories when 40% of our total carbohydrates are fibrous.

Because your body cannot digest fibre easily to make usable energy, it’s often better to think in terms of net carbs.  Net carbohydrates are simply the total carbohydrate minus the fibre.

There’s not much point for most people trying to avoid the carbs in your lettuce or broccoli because the fibre is beneficial in satiety and nutrient density and does not significantly affect blood glucose levels.

The following chart shows total carbs and net carbs together, showing that we get a more significant 25% reduction in energy when considering net carbs compared to only 19% when considering total carbohydrates.  So, if you’re managing your carbs (e.g., to achieve more stable blood glucose levels), it’s more useful to manage net carbs rather than total carbs.

When we look at non-fibre carbohydrates vs nutrient density, we see that a lower carbohydrate diet tends to align with a higher diet quality score.

However, because non-starchy vegetables contain some vitamins and minerals that are harder to obtain from meat and seafood, similar to satiety, no carbohydrate is not necessarily better than lower carbohydrates from a nutrient-density perspective.

Should I Eat Fat to Satiety?

Many people noticed the increase in carbohydrates between the 1960s and 2000 aligned with increased obesity and decided to swing to the other extreme by reducing carbohydrates instead of fearing fat.  The Atkins diet became popular in the 1970s, and in 2016 the keto diet took off, with many people believing that you could ‘eat fat to satiety’.  For more detail, see A Brief History of the Low Carb and Keto Movement.

However, when we look at the long-term trends in fat intake, we see that the availability of fat, mainly from industrial seed oils like palm, canola, soy and rapeseed, has been rising for the past century!

While carbohydrates dropped and have risen to about the same level as a century ago, our fat intake has increased by approximately 750 calories per person per day (mainly from the addition of industrial seed oils to our food system)!

How Does Fat Affect Satiety?

But interestingly, our satiety analysis shows that once we get beyond 40% of our calories from fat, we eat more.  While we require omega-3 and a little omega-6 fat in our diet, for the most part, fat is simply an energy source that your body loves to use for low-intensity activity.  Because it’s energy-dense, it’s also perfect for storage for later.

For reference, the average fat intake of our Optimisers is 47%, which is similar to the general population. People who focus on nutrient density tend to have a higher protein intake and lower non-fibre carbohydrate intake.

Similarly, when we look at nutrient density, we see that beyond about 40% calories from fat, diet quality starts to drop off quickly.  However, while reducing fat aligns with improved nutrient density, there’s not much benefit to going below 30% fat.

Are Carbohydrates Better or Worse Than Fat?

So, is fat better or worse than carbohydrates?

Interestingly, while many people are on either team low fat or team low carb, reducing fat or non-fibre carbohydrates similarly impacts our overall calorie intake.

Moving from 45 to 15% carbohydrates OR moving from 80% to 40% fat increase satiety and align with a similar reduction in calorie intake.

When we stand back, we see that the major problem is not fat OR carbs, but rather fat AND carbs.  As shown in the chart below, as our food consists of more fat and non-fibre carbohydrates, we eat more.

When we look at the long-term trends, we see that obesity rates took off once our food system became a similar blend of fat and carbohydrates together.

In the end, it doesn’t matter too much if you prefer to be on team low carb or team low fat, so long as you avoid foods that contain both simultaneously.

What is a Typical Carbohydrate Intake?

The charts below show the distribution of carbohydrates from our Optimisers, with an average carbohydrate intake of 22%.

For comparison, the chart below shows the satiety response curve and carbohydrate distribution from our previous analysis of half a million days of MyFitnessPal data.  It’s interesting to see how most people gravitate to the carbohydrate intake that aligns with the maximum calorie intake when they count calories rather than focus on managing macronutrients!

Which Macro Will Help You Eat Less?

When we combine all the satiety plots, we see that reducing fat and carbs while prioritising fibre and protein aligns with eating less.  As you increase protein %, the other macros tend to fall in line.

It’s probably not surprising that a higher sugar intake aligns with a higher calorie intake.  But like carbohydrates, zero sugar isn’t better, especially if you cut out all the non-starchy vegetables.   Cutting your sugar to about 5% of calories aligns with the lowest intake, while 21% sugar aligns with the highest intake.

While managing net carbs will help you reduce your calories by 25%, micromanaging your sugar will only get you a 7% reduction in calories.  Hence, keeping an eye on your net carbs will be more straightforward and effective.

While foods with empty calories from sugar as an ingredient are not ideal, you probably won’t need to worry too much about sugar in whole foods like vegetables if you’re managing to keep an eye on your intake of non-fibre carbohydrates.

It’s probably not surprising that more alcohol leads to a greater calorie intake.  Not only do the calories from alcohol add up quickly at seven calories per gram, but alcohol also tends to make us a little less inhibited and leads to poorer food choices.

And finally, some good news for those who like your coffee.  People who consume more caffeine per calorie tend to eat less across the day.  This is because coffee makes you feel energised and will help release stored energy from your liver.

What Are the Most Significant Factors That Influence Satiety?

We often prefer to think in terms of ‘good’ vs ‘bad’ or black vs white, including when it comes to our food.  However, as you can see, it’s not quite that simple, particularly for carbs or sugar, where the lowest and highest intake doesn’t lie at the extremes.

Nutritional Optimisation is primarily about packing more of the nutrients you require from the food you eat, which is the focus of the rest of this series of articles on satiety.

But optimisation is also about trade-offs.  To dial up your nutrient density and satiety, you must prioritise good things while reducing empty calories.

To help you understand where to focus your efforts, the table below shows the results of a multivariate regression analysis looking at the elements in your diet that provide more empty calories and align with us eating more.

At the bottom of the table, we see that reducing starch, saturated fat, and transfats aligns with a much smaller reduction in overall calorie intake.  So it’s better to just focus on reducing fat and carbs (while, of course, prioritising protein and nutrients) to increase satiety.

For completeness, the table below shows the results of the multivariate analysis when all nutrients are considered.  Interestingly, fat and net carbs are no longer significant once we consider protein.

At the top of the table, we see that foods with the following nutrients have the largest positive impact on satiety when everything else is considered:

At the bottom of the table, we see that managing your intake of monounsaturated fat has the largest negative impact on satiety (10%), followed by starch (6%), saturated fat (2%) and alcohol (0.6%).

It’s always best to focus on giving your body what it needs.  However, you should also work to dial back the foods that contain empty calories from ultra-processed foods that tend to be high in industrial seed oils (which are high in monounsaturated fat) and refined grains (which contain plenty of starch).

The table below compares the parameters reviewed in this article.

If you want some help dialling in your balance of protein, carbs and fat to align with your goals, you may be interested in our Macros Masterclass.

But if you want suggestions on what to eat, you can check out our suite of free food lists or our nutrient-dense recipes here.