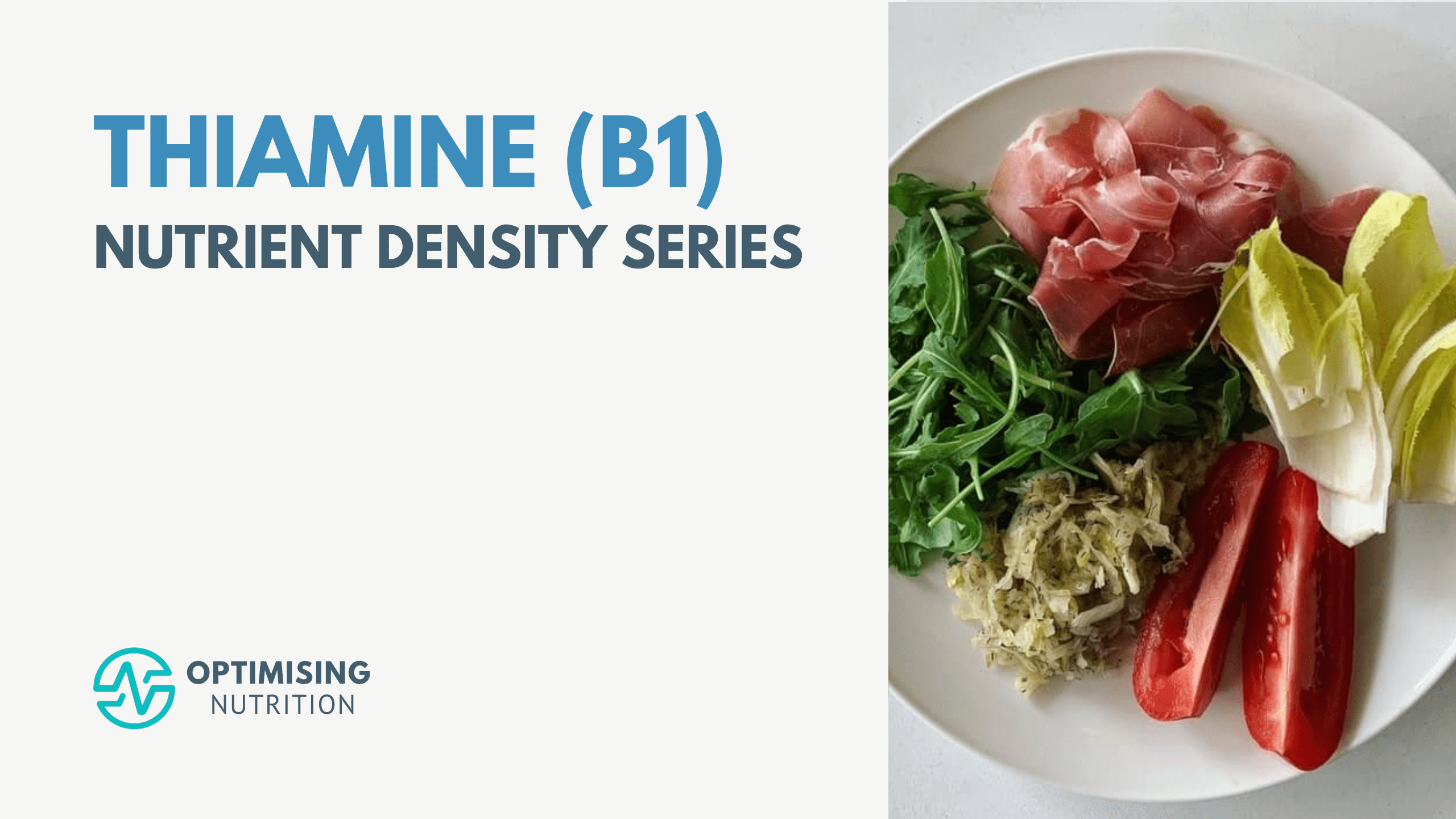 Vitamin B1, also known as thiamine, is an essential nutrient that enables you to use energy from foods rich in carbohydrates to power your brain and nervous system.

Roles of Vitamin B1 in Your Body

What Are The Symptoms of Vitamin B1 Deficiency?

Severe thiamine deficiency is a recognised medical condition known as beriberi.  There are two forms of beriberi: ‘wet’ beriberi affecting the heart and circulatory system, and ‘dry’ beriberi, which can lead to nerve damage and poor muscle strength.  Wet beriberi can present as heart failure, while dry beriberi presents as muscle paralysis.

The condition known as Wernicke-Korsakoff syndrome is often a result of thiamine deficiency.  It is characterised by loss of cognition, muscle coordination, tremors, visual changes, and confusion that can lead to death if it goes unaddressed.

Low thiamine levels are prevalent in people with diabetes, Alzheimer’s, hypertension, liver failure and HIV/AIDS.  In addition, people who rely on polished rice and milled flour are prone to thiamine deficiency because these foods lack nutrients, including thiamine.

Thiamine deficiency is also common in alcoholics because alcohol inflames the stomach and contributes to nutrient malabsorption.  The body also requires thiamine to create the enzyme that metabolises alcohol.  Therefore, thiamine supplementation is often used in their rehabilitation and recovery.

Thiamine is a heat and light-sensitive vitamin.  Because of this factor, processing causes significant losses of thiamine levels in food, including:

Storage and Losses in The Body

Thiamine is a water-soluble vitamin that can only be stored in the body for short durations before it exits through your urine.  Due to the limited storage capacity for thiamine, deficiencies can develop in as quickly as two weeks of a nutrient-poor diet.

How Much Thiamin Do You Require Each Day?

Our satiety analysis of data from Optimisers indicates a significant satiety response to a diet containing more thiamine (excluding amounts that could only be achieved from fortification or supplementation).  People who consume more vitamin B1 foods and meals per calorie tend to eat around 17% fewer calories than those consuming the least thiamine.

For reference, the average thiamine intake of Optimisers is 1.8 mg/2000 calories, which is near twice the Estimated Average Requirement of 1.0 mg/day and the Daily Recommended Intake of 1.2 mg/day.

Stretch Target For Vitamin B1

Someone aiming to optimise their micronutrients could set a stretch target of 3.0 mg/day for men and 2.4 mg/day for women, as shown in the table below.

Because thiamine is a water-soluble vitamin, there is no known upper limit for vitamin B1 as the kidneys quickly excrete excess dietary thiamine in the urine.

Bioavailability of Vitamin B1 (Thiamine)

Little is known about the bioavailability of thiamine from plants vs animal-based foods.  However, thiamine is sensitive to heat, how long it is cooked, and the duration it is stored.  For this reason, avoid cooking foods at high temperatures for too long, and try to consume unprocessed fresh foods as much as possible.

Vitamin B1 rich foods are found in both plant and animal-based foods.  However, foods highest in thiamine are arguably more concentrated in animal foods like meat, poultry, and shellfish.

Grains are relatively good sources of vitamin B1, although it’s best to consume the whole, unprocessed forms.

Some examples of thiamine rich foods include:

Some of our NutriBooster recipes highest in Vitamin B1 (Thiamine) include:

Availability of Thiamine in The Food System

Nearly 20% of US residents are thought to fall short of their minimum vitamin B1 intake.  But this could be as high as 50%!

Food staples like polished rice and milled flours are essentially void of thiamine.  To account for this, the widespread fortification of refined white flour was implemented in 1939 to address thiamine deficiency.

While fortification and supplementation can be helpful if you have deficiency symptoms, it’s important to avoid supplements and fortified foods that provide more thiamine (vitamin B1) than you require.

Although vitamin B1 is critical for transforming food into usable energy, our data has shown an increase in intake of otherwise nutrient-poor foods fortified with thiamine.

While whole grains naturally contain thiamine, refining them removes the bran and wheat germ that carries most of the thiamine found in grains.

As shown in the chart below, our average intake of B1 has remained slightly above the EAR and RDI (data from USDA Economic Research Service) since the introduction of fortification in the 1930s.  However, this is still well below our preferred stretch target for vitamin B1 from whole foods that aligns with optimal satiety.

Interestingly, when we look at the satiety analysis, including supplementation and fortification, we see that foods with very high thiamine levels correlate with an increased caloric intake.

The 2014 paper Excess vitamin intake: An unrecognised risk factor for obesity highlights that sharp increases in the fortification of infant formula and breakfast cereals, when introduced in different countries, correlated with sharp increases in obesity rates.

The study notes that B vitamins promote fat synthesis when consumed in excess.  In addition, they may cause hypoglycaemia (low blood sugars) and thus increase the appetite for more high glycaemic foods when they’re found in foods like fortified bread and cereals.

Fortification and supplementation can benefit frank deficiencies, or where nutrient-dense foods are hard to obtain.  However, data analysis suggests that supplementation and fortification of isolated nutrients in levels over and above what is naturally found in whole foods does not correlate with an overall lowered calorie intake.   Therefore, the satiety impact shown in this analysis can only be assumed for minimally processed foods naturally containing these nutrients.

In 1959 the University of Illinois produced a landmark pamphlet titled “Balancing Swine Rations“, documenting their research to identify the feeding regime that optimised growth while minimising the feed ratio (i.e., maximum weight gain with minimum food inputs).  The most rapid weight increases were observed in pigs with only fortified feed and no alternative.

They ate more of the fortified feed rather than seeking out pasture or consuming alfalfa.  However, farmers found that pigs housed in barns that were solely fed grain and corn would get sick, lose their hair, and fail to thrive.  Therefore, before vitamin supplementation, farmers needed to ensure that the pigs had time on pasture or were fed alfalfa to obtain adequate vitamins to grow and remain healthy.  They also found that pigs predominantly preferred pasture and unfortified feed if given the choice of pasture or fortified feed.

In his book, The End of Craving, Mark Schatzker likens our modern food system to the fortified pig food designed to maximise growth and evade deficiencies.  The fortification of processed food overrides our innate drive to seek out a variety of foods that contain the full spectrum of nutrients we need to thrive and avoid excess calorie intake.  Since 1959, this understanding of the role of supplementation has been used heavily in feeding livestock to maximise growth rates for meat production.

The increased rates of fortification of breakfast cereals and other ultra-processed foods may have inadvertently had a similar impact.  Because ultra-processed foods now contain some of the essential nutrients we need, we are motivated and content to continue eating more of them.  Unfortunately, as a result, we have a reduced appetite for foods that naturally contain the nutrients commonly used in fortification.

If we have innate cravings for vitamins, fortification may increase cravings for processed foods and drown out cravings for whole foods containing other essential nutrients like amino acids, potassium, sodium, and calcium needed to thrive.  For this reason, in our Micros Masterclass, we guide people to review their intake of supplements and fortified foods to ensure they are not excessive.

In summary, it can only be assumed that the positive satiety impact of increased nutrient density comes from whole foods containing a broad range of essential and non-essential nutrients, not isolated synthetic nutrients.

Nutrient Profile of High-Thiamine (B1) Foods

The nutrient fingerprint below shows that thiamine is reasonably easy to obtain from a nutrient-dense diet.  Foods that are high in thiamine tend to be lower in fat.  This makes sense, considering we require twice as much thiamine to metabolise carbohydrates as fat.

How Can I Calculate my Vitamin B1 (Thiamine) Intake?

If you’re interested in checking if you’re getting enough (but not too much) thiamine (vitamin B1) in your diet, you can visualise your nutrient profile using our Free 7-Day Nutrient Clarity Challenge.