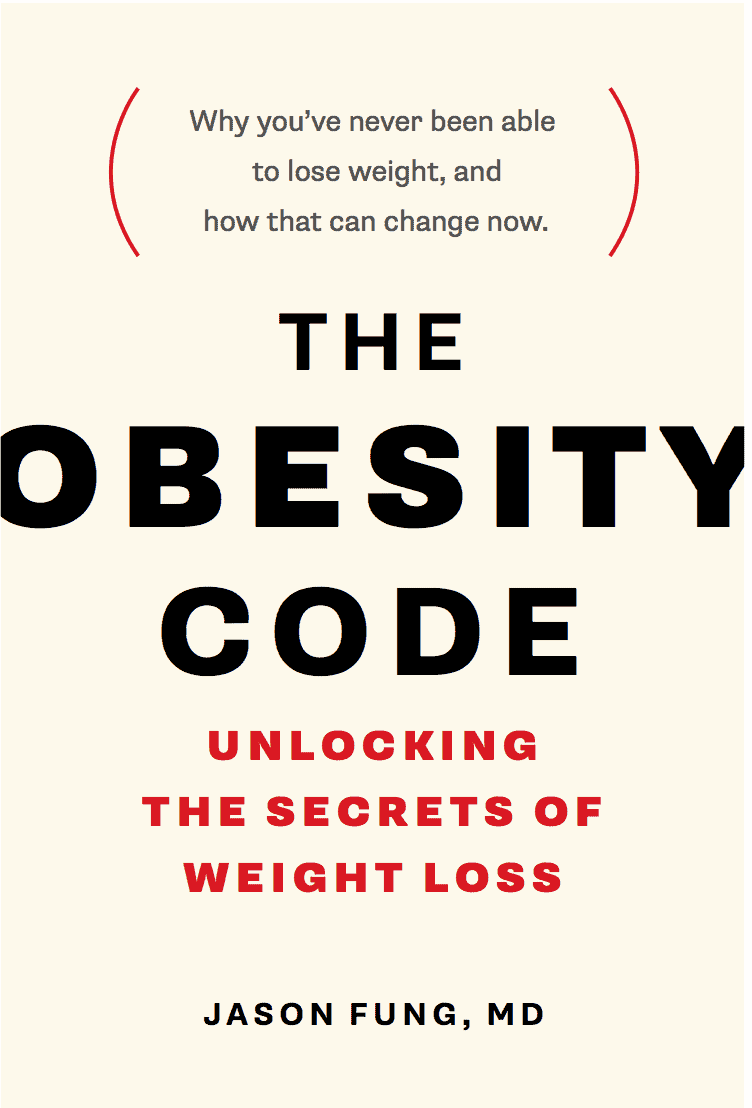 The Obesity Code: Unlocking the Secrets of Weight Loss by Jason Fung

Jason Fung, the author of The Obesity Code, is a doctor with a fire in his belly.

I first came across Jason’s work in January 2015 after watching his “How to Reverse Diabetes Naturally” video which has now had more than 600,000 views.  I then consumed his Intensive Dietary Management blog.

Jason Fung’s primary thesis is that constantly elevated levels of insulin drive by our modern processed diet will lead to insulin resistance which in turn causes obesity and a host of metabolic issues.  Jason says that fasting, not more medication, or even a low carb diet, is the most aggressive way to reverse insulin resistance.

Jason has developed a significant following in a short amount of time due to the fact that he has joined a few fundamental dots when it comes to diabetes, weight loss and insulin.  He also doesn’t pull any punches when it comes to communicating the message that people who are producing too much insulin due to hyperinsulinemia and obesity probably don’t need any more insulin.

You may think of Jason as ‘that fasting guy who says insulin is bad’ however his work is much more extensive and comprehensive.  Inspired by a hunger to understand the situation and how he can help his patients, he created a massive six-part six-hour Aetiology of Obesity series and an extensive blog for his patients.

The Etiology of Obesity series on YouTube is not just about insulin or fasting.  It’s a comprehensive review of a plethora of relevant research and theories in the areas of nutrition, weight loss and obesity.

But why has a busy nephrologist (kidney specialist) gone to all this effort when he could be making a lot more money treating sick people?  It seems he got fed up with treating symptoms and wanted to start addressing the upstream root cause of the diseases that his patients were suffering with.

Jason’s new book The Obesity Code is not just about fasting, it’s about the full aetiology (causation or origin) of obesity.  He has done an excellent job of setting out the multiple facets of how obesity develops so we can gain a better understanding of what we can do to remedy obesity.

If there’s one drawback of his videos and previous work, it’s that the production quality of the lectures for his patients doesn’t do justice to the quality of the content.   Jason’s new book, The Obesity Code is a polished, professional product that sets out all the research that’s gone into his videos and blog into one cohesive, comprehensive piece of work.

There are many factors that affect our metabolic health and lead to obesity.  Jason delves into each one and joins the dots between them.

And on he goes through insulin, cortisol, the pros and cons of low carb, hyper palatable foods etc etc etc.

In the end, you need to address the thermostat, or the set point, which is controlled by the master hormone insulin.  Intermittent fasting is the most effective way to lower insulin and restore insulin sensitivity.

Jason covers a wide range of topics thoroughly, logically and with extensive research and references.  This is practically a textbook on the different facets of the subject that is easy to read and engaging for the educated layman.

It was Jason’s observation about the food insulin index, and the effect of protein and fibre that, after watching his video series, sent me down the rabbit hole to develop the concepts of ‘insulin load’ and ‘percentage of insulinogenic calories’.  I wanted to formularise them to see how we could apply them to identify foods that would reduce insulin.

At the time scoured the Intensive Dietary Management blog looking for recommended foods to align with Jason’s lower insulin load approach but found nothing.  I have now created a range of lower insulin load food lists that will align with different goals, sort of an Obesity Code Diet Plan if you will.  The table below will help you find the ideal foods for you based on your current blood glucose control and your weight loss goals.

I am also appreciative that Jason has referred many to optimising nutrition in search of low insulin load foods.  So, I extend a big “thank you” to Jason for inspiring me and supporting me in this adventure into the blogosphere.