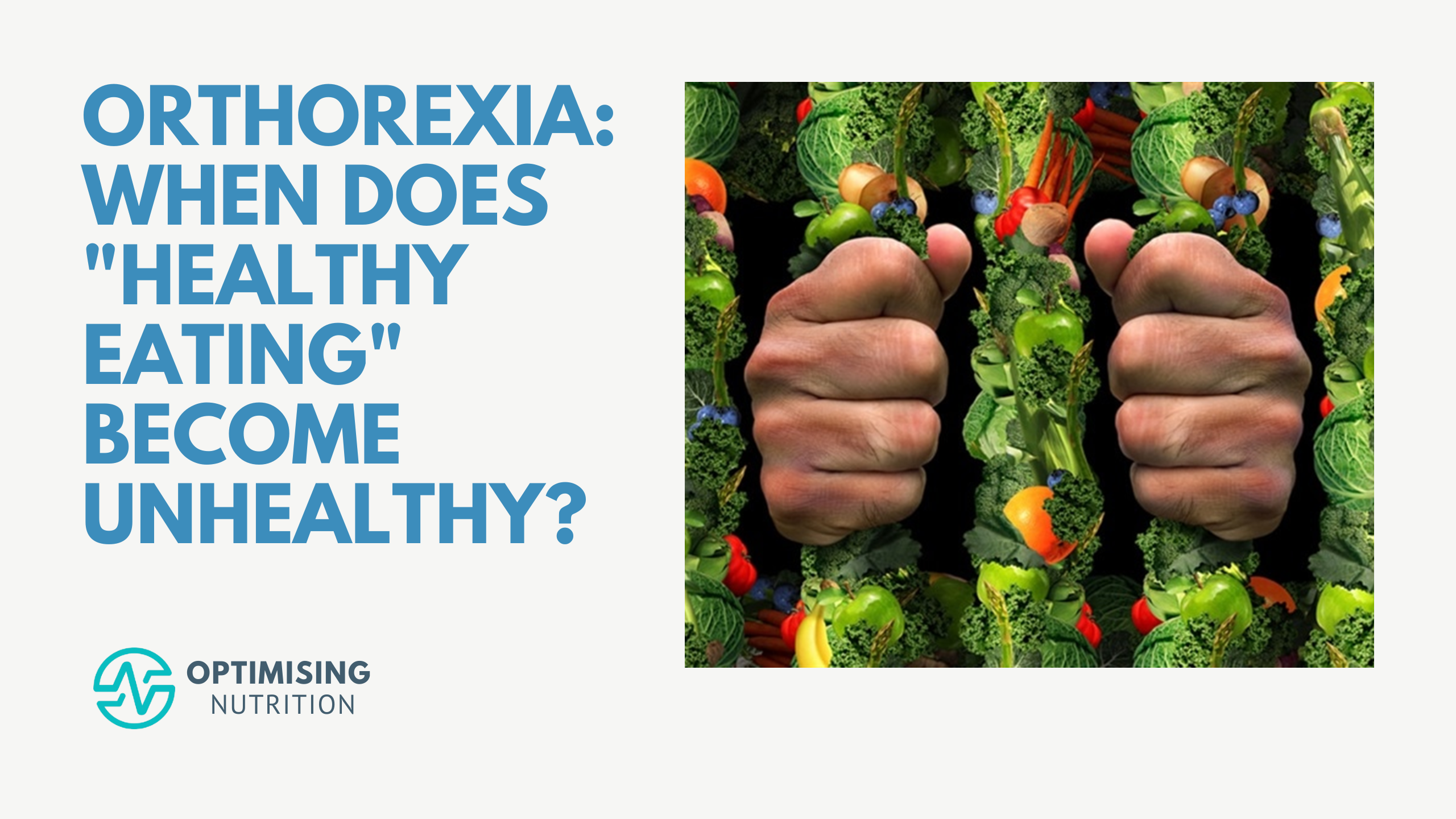 A well-intentioned nutritionist friend recently expressed concern that encouraging someone to get nutrients from food could lead them to become “orthorexic”.

Could teaching people to coordinate their macronutrients and micronutrients to align with their goals (as we do in the Micros Masterclass) really be a bad thing?

Could guiding people to focus on getting the nutrients from the food they eat promote unhealthy behaviours?

It made my head spin with questions.

This article is my attempt to understand orthorexia and how we can avoid an unhealthy obsession with eating.

To cut to the chase, orthorexia occurs when your belief-based dietary approaches conflict with your body’s nutritional needs.  As a result, your arbitrarily chosen nutritional approach clashes with your healthy appetite signals.

Foods that are subjectively believed to be “bad” (for whatever reason) are seen as “unclean” for breaching self-set criteria.  People become wracked with guilt for desiring foods that are deemed to be off-limits by their dietary beliefs.  We then develop an “unhealthy relationship” with food when our conscious mind tries to restrict us from eating what we believe to be “bad”.

This “bad food” vs. “good food” paradigm creates an unnecessary and unsustainable conflict between our beliefs and our appetite to obtain adequate energy and essential nutrients.

This struggle for dominance between our neocortex and our reptilian “lizard” brain eventually drives us “mad”, or at least to have a diagnosable disordered eating.

But if we give the body the nutrients and energy it needs, then our lizard brain stands down.

Once you make peace with your inner lizard, you can enjoy your life without needing to be so food-focused!

By contrast, “orthorexia” is not officially recognised as an eating disorder.  However, it shares some common elements of both conditions.

“Orthorexia is an obsessive-compulsive process characterised by extreme care for and selection of what is considered to be pure ‘healthy’ food.  This ritual leads to a very restrictive diet and social isolation as compensation.  Orthorexics obsessively avoid foods that may contain artificial colours, flavours, preserving agents, pesticide residues or genetically modified ingredients, unhealthy fats, foods containing too much salt or too much sugar and other components.  The way of preparation, kitchenware and other tools used are also part of the obsessive ritual.”  (Bartrina, 2007)

Notice the above definition uses the word obsessive three times

At the risk of sounding obsessive, let me clarify: orthorexia isn’t contagious.  You can’t “catch” it by taking our Micros Masterclass.

But where do you draw the line between healthy eating and becoming obsessed with trying to eat in a way that you believe to be “healthy”?

The Origin of Orthorexia

The term “orthorexia” was first coined in 1997 by Steven Bratman and is derived from “orthos” – which is Greek for “right.”

In this essay, Bratman describes his life as a chef in a vegan commune.  Practising his craft among Zealots while cleaving to a list of conflicting food beliefs and sanctioned food preparation techniques challenged his skills and sanity.

In his essay, Bratman outlines some criteria that may define someone  as “orthorexic”:

In a subsequent article, Bratman adds the following clarification:

“Enthusiasm for healthy eating doesn’t become “orthorexia” until a tipping point is achieved and enthusiasm transforms into an obsession.  Orthorexia is an emotionally disturbed, self-punishing relationship with food that involves a progressively shrinking universe of foods deemed acceptable.

“A gradual constriction of many other dimensions of life occurs so that thinking about healthy food can become the central theme of almost every moment of the day, the sword and shield against every kind of anxiety, and the primary source of self-esteem, value and meaning.  This may result in social isolation, psychological disturbance and even physical harm.”

It would benefit us all to pay attention to Bratman’s observations on orthorexia.  Just as his perspectives serve as a cautionary tale, they also are reassuring.

Orthorexia is a neurotic obsession with healthy eating.  This is to say that it’s a pathological obsession and not a simple menu choice.

Conversely, as you will see, prioritising foods that correct nutrient deficiencies and optimise nutrition is arguably the best recipe for actively avoiding orthorexia.

Perusing nutrient density broadens your horizon to new and varied foods and taste sensations.  You can also prioritise the nutrients in your food in any dietary framework, whether it be paleo, vegan, keto, vegetarian, Mediterranean or carnivore, to ensure you’re getting the nutrients you need within your preferred dietary regime.

The Rise of Orthorexia

The term “orthorexia” gained recognition by mainstream social media in 2015 when raw vegan Instagrammer Jordan Younger “The Balanced Blonde” announced she was orthorexic.  She described how her motivation to eat healthily became obsessive to the point of malnutrition.

As an aside, Dr Bratman notes on his blog that vegans, fruitarians, and those following similar lifestyles that are not allowing them the nutrients they need from their restrictive diets are much more likely to become orthorexic.

Adequate macronutrients and micronutrients can be harder to find on vegan, fruitarian, or other extreme belief-based diets.  This can ultimately contribute to depression and anxiety, as these nutrients are needed to make feel-good neurochemicals.  Jordan’s experience was an exemplar of “healthy” eating gone obsessively wrong.

You could probably add “social media influencer with a large following whose income depends on maintaining an external appearance” to likely risk factors for orthorexia.

Obsessive-compulsive tendencies and pre-existing eating disorders like anorexia or bulimia are other risk factors for orthorexia.  You are also at a higher risk of becoming orthorexic if you have tendencies towards perfectionism, OCD, high levels of anxiety, or an increased need for control.

While social media can help support people and teach nutrition principles in a supportive and interactive way, there can definitely be downsides.  When a group of media-linked people believes that certain foods are “bad” and prolifically disseminate that message, eating habits can become rigidly rule-based within that population.  Unhealthy levels of groupthink and “cyberchondria” can flourish when we each have our own personalised social media feed reinforcing what we believe is true.

Rather than providing what your body needs, “healthy food” is unfortunately defined more often by what we should avoid or exclude (i.e. calories, saturated fat, cholesterol, sugar, carbs, fat, plants, animals, dairy, oxalates, anti-nutrients, etc.).  This optimisation by exclusion of ‘bad’ comments of food leads to rediculous conclusions!

Sadly, defining what we should eat by what we should avoid quickly sets us up for disordered eating.  We often get into trouble when we think about “good food” vs. “bad food” without considering context or goals.  For example, you could argue that a doughnut is optimal for a starving caveman.  However, regular doughnut consumption is unlikely to be optimal in our modern food environment saturated with energy-dense, nutrient-poor hyperpalatable foods.

Foods like doughnuts will lead most of us to consume more energy from nutrient-poor foods than we require because processed foods are intentionally designed to trigger our binge response.  This makes it difficult for our conscious mind to maintain control.

Conversely, once you focus on food quality, your reptilian brain, sweet “Lizzy”, settles into snooze mode once she is content that no imminent emergency or famine requires her preemptive binge response.

While “eat less and move more” and “calories in versus calories out” are scientific realities, they’re often too simplistic to actually be helpful in our daily reality.  They also blame the individual and shame them for lack of “willpower” and poor impulse control when they can’t regulate their energy intake, no matter how hard they try.

But the reality is that we’re set up to fail in our modern food environment when we are wired to eat.  Rather than exerting more conscious willpower, we need to work to control our setting.

While we need to accept personal responsibility for what goes in our mouths, restricting food quantity without any consideration for food quality is a fool’s errand.  Eventually, your body will rebel, and you’ll find a way to backslide, binge, or fall off the wagon.  Ultimately, you will be wracked with guilt and sucker-punched into feeling like a failure because you tasted the “forbidden food”.

You try harder to restrict what you eat, but the more motivated you are to be “better,” the closer you skate towards orthorexia.

Resist “forbidden” foods that we’ve convinced ourselves are “bad”.

Orthorexia is a hellish helix that few victims can unwind.

Rather than thinking in terms of “good food” versus “bad food”, it’s more beneficial to prioritise the foods we should eat by asking, “what foods are optimal for me given my current context and goals”?  Our unhealthy “good and bad” belief system soon evolves into a healthier mindset of “good, better, and best” and moving toward more optimal nutrition.

Your body wants you to be healthy!  But our current environment of engineered and ultra-processed foods has hijacked your cravings.  Modern foods are designed to produce a maximal dopamine hit to ensure you return to buy more.

But once you reduce your exposure to foods that don’t align with your goals, your gut, brain, and instincts will become trustworthy again.  Your recalibrated appetite signals will guide you to the nutrition you need to thrive without provoking feelings of shame, intense guilt, or constant deprivation.

While there’s no perfect diet, we have worked hard to quantitatively rank common foods and meals to identify the ones that provide more of the nutrients your body is craving.

The “Problem” with Nutrient Density

The “problem”, with foods that provide the most micronutrients per calorie is that they are tough to overeat.  That is, they are very satiating. You would not be able to maintain your body weight in the long term if you only had access to these high-satiety foods.

To overcome this “problem”, we have created several categories of  food lists and recipes tailored for different goals, including:

After three years of intense work, we now have 600+ NutriBooster recipes optimised for different goals.  These are all embedded into Nutrient Optimiser, which we use in the Macros Masterclass and Micros Masterclass.

Not everyone needs to eat optimally, all the time!  However, we’ve found that once people prioritise more optimal foods and meals, they fast-forward toward their goals.  Conversely, if you are not getting the desired results, you can reduce the ‘less optimal foods’ in your daily feeding routine.

Once you reach your initial goal of weight loss, stable blood sugars, or both, you may be able to relax and focus on health maintenance for a while before focusing on a new goal (i.e. gaining muscle or athletic performance).

You won’t catch orthorexia because you’re eager to eat in a way that supports your health.

Orthorexia occurs when we set up our body’s innate need for energy and nutrients in opposition to our misguided beliefs about ‘bad foods’ or properties of food that we believe we should avoid.

You don’t need to become obsessive about food.  But prioritising giving your body the nutrients from the food you eat will bring peace as your appetite settles down and your survival instincts (aka Lizzy) go back to sleep, assured that it will get what it needs when it needs it.

Nutritional optimisation is about moving towards optimal.  You don’t need to recant from your “evil ways” and adopt a new dogmatic dietary religion.  It’s the people who approach Nutritional Optimisation as curious students and make small progressive changes that get the best results.

5 thoughts on “Orthorexia: When Does “Healthy Eating” Become Unhealthy?”