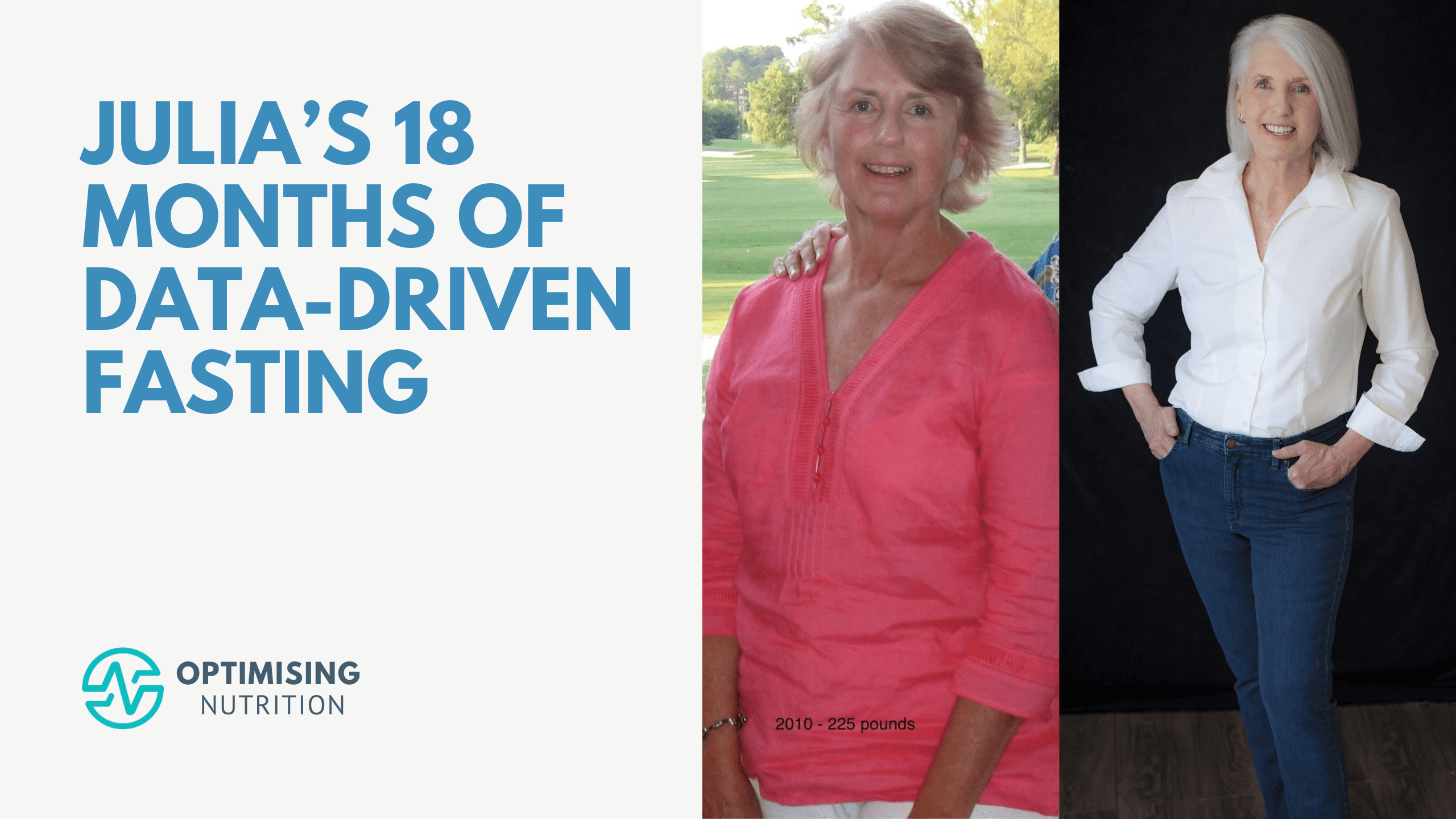 When we kicked off our Data-Driven Fasting Challenges, we hoped to help people find a sustainable eating routine that would empower them to achieve their long-term weight loss and health goals.

We wanted to help people avoid the restrict-binge-restrict-binge cycle that seems to be all too familiar for so many people following popular fasting protocols.

Now, with twelve rounds of the Data-Driven Fasting Challenge under our belt, it’s exciting to see that DDF has worked so well for so many.

One shining example is Julia, who recently had professional photos taken to celebrate her 71st birthday and her newfound zest for life!

Julia initially lost weight switching to a lower-carb diet, dropping from 225 to 188 lbs.  The photo below shows Julia at her heaviest.

After plateauing on a lower-carb diet for nearly a decade, Julia enthusiastically adopted Data-Driven Fasting early on.  The photo below shows her around the time she started her first Data-Driven Fasting Challenge in August 2021.  Here, she weighed around 188 lbs.

Most of her weight came off during the first year after successive rounds of repeatedly chasing a lower premeal glucose trigger in the DDF Challenge.

She reached her goal of 150 lbs before Thanksgiving 2021.  After Thanksgiving and Christmas, she used the January 2022 round of Data-Driven Fasting to quickly dial things back in and return to her goal weight.

‘With Data-Driven Fasting and the Macros Masterclass, I’ve lost a total of 38 pounds.

I still can’t believe I’ve achieved a BMI of 22!

With perfect health and increased energy, I feel even better today than six months ago.

My immune system remains strong, and I didn’t even have a sniffle in the past two pandemic years!

I now realise that one of my mistakes with my low-carb diet was trying to keep total carbs low; this limited nutrient-dense, satiating, high-fibre vegetables, fruits and dairy unnecessarily.

Dr Ted Naiman calls this ‘unifocal over-reliance on carb reduction’.  It can work–especially in the beginning–but I stopped losing fat well before I reached my goal.

Aside from reducing my carbs, Marty Kendall’s DDF Program guided me to use other powerful ‘diet levers’ like:

Data-Driven Fasting, Nutrient Optimiser, and Ted Naiman’s P:E Diet continue to empower me to improve the nutrient density and satiety value per calorie of my food.

I regained some weight over the holidays.  But managed it with an extended version of the DDF ‘Thanksgiving Hack’.  In this way, I enjoyed feast meals while noting BG reactions.

I learned so much from seeing how my glucose responded to different foods!

To my surprise, I found that I have regained metabolic flexibility after decades of pre-diabetes.  My BG rises after meals are now muted and short-lived, even after bread and dessert!

I prioritised protein, foods with a satiety value per calorie, and used my premeal glucose meter as a fuel gauge.  Combining these key takeaways has led to limited weight gain, despite being ‘off’ the challenge.

With these tools, long-term maintenance has become easy!

These days, living the DDF lifestyle is simple.  I check my BG before the first meal of the day and let it guide my food choices for the rest of the day.  For my body, this usually gives me a noon to 6 pm eating window.

I ended the last DDF challenge on my 71st birthday with a waking fasting glucose of 100 mmol/L, at 150 pounds!

The chart below shows the changes in Julia’s waking glucose, which dropped during the first few months as she lost most of her weight.

Despite all the bickering about low-carb vs low-fat diets, our satiety analysis indicates that people tend to eat less (and lose weight) when they reduce either net carbs or dietary fat.

In fact, it’s actually the percentage of total calories made up of protein, or your protein percent (protein %), that has the most significant effect on satiety.

Dialling back dietary fat and (or) carbs reduces the area under the curve of your glucose response to meals and allows your blood sugar to fall below your personalised blood sugar trigger point.  In turn, this allows you to use your stored fat for fuel.

As you can see from the chart below, Julia’s lower-carb approach keeps her blood glucose within the healthy range.  By observing her glucose, she found the perfect eating routine for her.

It’s those points when her blood glucose drops just below her trigger point when she’s tapping into her fat stores.

Julia’s premeal values quickly dropped to a healthy level that her body was comfortable with.  Even though her premeal glucose didn’t drop much further after March 2021, she continued to lose weight as she used her blood sugar to guide what and when to eat.

Then, you can see after Thanksgiving and Christmas, when she refilled her glucose and fat fuel tanks a little, her premeal glucose went up again.  But she was able to quickly catch up by restarting the process again.

The chart below shows Julia’s premeal and trigger chart in the January round of the Data-Driven Fasting Challenge.  Her premeal trigger progressively trended down as she got back to her goal weight after Christmas.

Congratulations, Julia!  We’re super excited and happy for you!

Thanks so much for your outstanding contributions as a moderator guiding newbies on their DDF journey.

Join the next 30-Day DDF Challenge