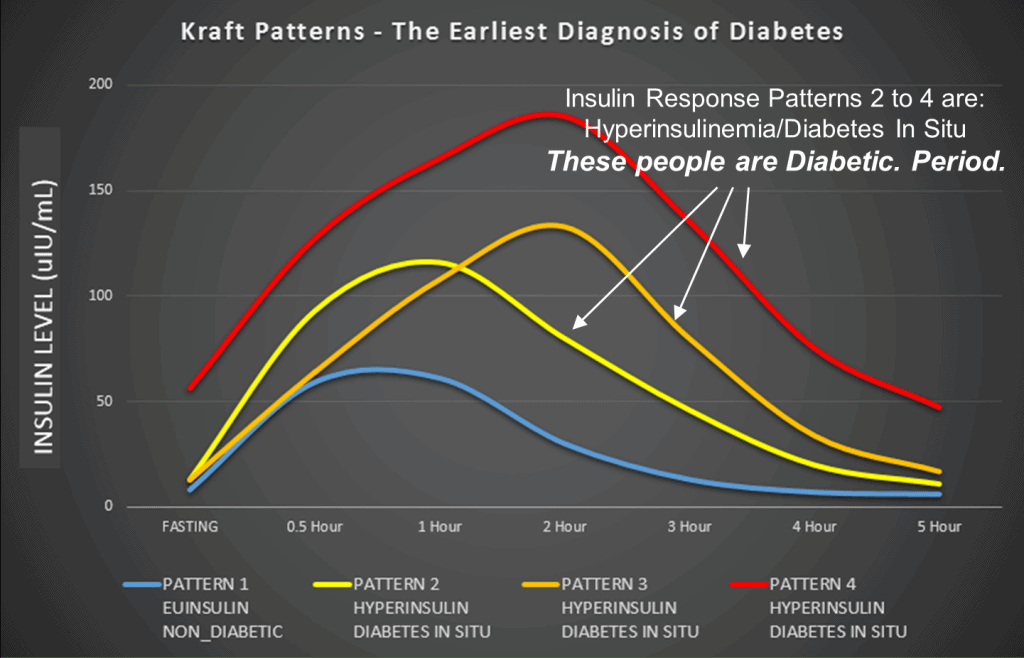 You may be aware of the work of Dr Joseph Kraft that has recently been re-discovered by Catherine Crofts and Ivor Cummins.  Dr Kraft carried out insulin response tests in more than 14,000 people and found that t he majority of them had some form of insulin resistance.  People who are insulin resistant need to secrete more insulin to maintain normal blood glucose levels.  These high levels of insulin can lead to fat gain and other metabolic issues.[1]

Catherine Crofts, Caryn Zinn, Mark Wheldon and Grant Schofield recently published a paper looking at the various diseases that are affected by hyperinsulinemia including:

In view of this ominous list of health issues it would make sense to try to actively avoid hyperinsulinemia.  Managing insulin resistance and optimising fat metabolism is critical for your overall health.  This article looks at the wide range of things that influence insulin sensitivity and what you can do about it.

how to stabilize blood sugar with food

While our food intake is not the only factor that influences hyperinsulinemia it is one that we can actively manage.

Measuring insulin in the blood stream is expensive and not commonplace.  Individuals with type-1 diabetes, however, provide a unique opportunity to understand the things that affect insulin demand.

Measuring the insulin requirement for someone with type 1 diabetes is as simple as downloading the data form their insulin pump into a spreadsheet.  My wife Monica’s daily insulin usage over eighteen months is shown in the chart below.

Diabetes is an ongoing struggle!  Monica has been torn between mainstream advice that says that fat is bad and you’ll get fat and have a heart attack if you have too much of it, and her husband who keeps banging on about low carbohydrate, Paleo and ketogenic dietary approaches that might help her improve her diabetes control!

After generally trying to follow a paleo template for a couple of years in July 2014 she started taking the low carb thing a bit more seriously in an effort to gain control of her blood glucose levels.  Between August and December 2014 her insulin requirements came down from about 36 units per day to about 28 units per day!

Then, in January, when we came across the TYPEONEGRIT Facebook group and saw what people were eating to get flat line blood sugars, she ramped up her efforts to further refine how we ate, with a renewed motivation and belief that it could make a difference.

We also spent a week in Vanuatu around Christmas which likely helped to improve the cortisol levels and improve gut health with the sunshine, salt water and nutrient dense food.  In the period between January and March 2015 her insulin requirements came down even further to about 24 units per day from up to 40 units per day six months before.  During this period she had the best blood glucose levels in the thirty years of being a type 1 diabetic.

People with diabetes who take insulin will also put on weight.  This is generally true for people with both type 1 and type 2 unless their carbohydrates are restricted.  Even though the insulin demand has varied during this time Monica has managed to lose about ten kilograms to achieve an ideal body weight that puts her in the middle of the ideal BMI range.

People with type 1 diabetes find that they require much less insulin during fasting and for a period after fasting due to improved sensitivity.

Those of us with a functioning pancreas can track insulin by measuring blood glucose and blood ketones at the same time.  Cancer researcher Dr Thomas Seyfried suggests that the glucose : ketone index (GKI) is a good proxy for insulin levels (see this article for more detail on how the GKI).

Jimmy Moore recently did a seventeen day fast with daily Periscope video updates[3] where he documented his blood sugar and ketones which are shown in the chart below.  Jimmy usually maintains good blood sugar levels and high ketone levels with his ketogenic diet, however a few days into the fast the ketone levels kicked up even more (see orange dots in the chart below). 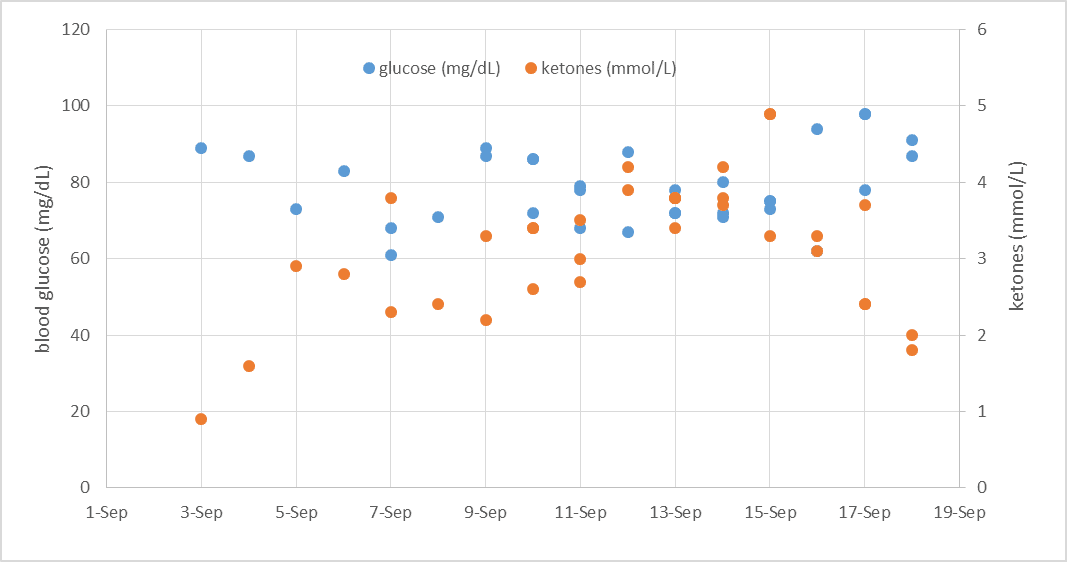 I’ve also plotted Jimmy’s GKI values through this period which also gives us a feel for his insulin levels.  You can see that in the first few days his GKI plummeted as he exhausts his glycogen stores and is forced to start burning body fat, with ketones rising and glucose levels dropping. 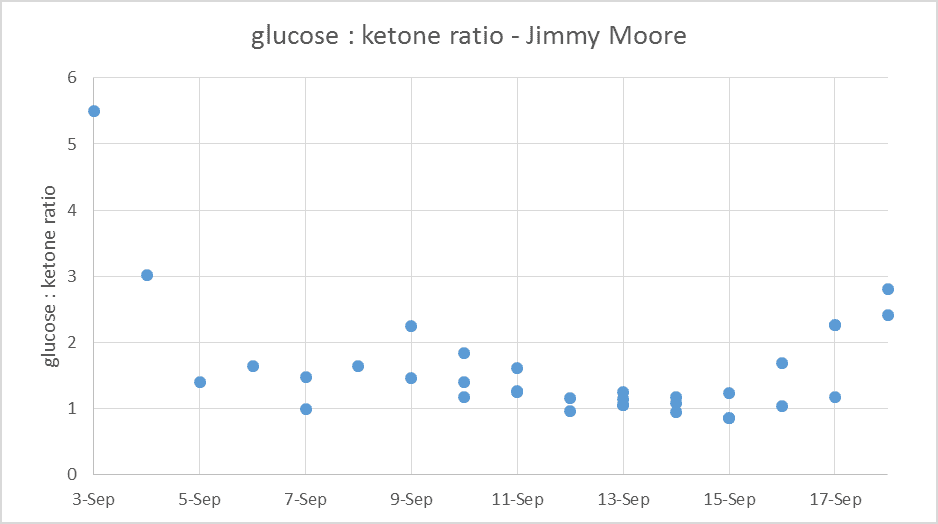 Although Jimmy was hoping to make it through to three weeks of fasting, towards the end of the fast he started to feel poorly with travel and stress (and perhaps an infection) and chose to terminate the fasting.   Sickness is often linked with poor blood glucose levels or insulin resistance.

“My experience has been whenever there is high blood sugar, there is yeast overgrowth.”

“You can spot the infections with blood glucose rise and increased insulin demand typically before symptoms present. It’s also important to make sure you – if you are low carb – track your basal totals…  if you are in a non-physiologic zone, 20u or more a day for example, and are not overweight/IR, you might have a chronic (typically dental) infection. Bernstein recommends a tooth tapping performance by the dentist, but also a quick home test is to drink a glass of very cold water and look for pain.”

The theory that infection can lead to poor blood sugar control and increased insulin demand also ties in with the our experience with Monica requiring much more insulin during periods when she’s had infections as highlighted in the chart of her insulin levels above.

Heart Rate Variability (HRV) has become popular lately as a way to track your health, stress and exhaustion.  Diminishing HRV scores will often suggest that you’re heading for burnout and will sometimes indicate that you have a sickness coming on.  It seems that tracking your GKI can also provide a similar indication of your overall metabolic health and indicate when you are getting an infection or starting to burn out and get inflamed.

A diet low in processed carbohydrates is not just about reducing blood glucose and obesity.  It also has benefits in reducing infections such as SIBO (small intestinal bacterial overgrowth) and other conditions such as thrush.[4]

A diet high in sugar and processed carbohydrates will feed the ‘bad bacteria’ that will lead to SIBO[5] and other infections such as thrush that are related to too much sugar.

When Monica started to try to increase the fat in her diet her digestion struggled due to SIBO which meant that she was not able to digest the fats.  She worked with our naturopath Elizma to cleanse the SIBO with a vitamin C flush and then re-populate the gut again.

A diet low in sugar and processed carbs is the best thing to starve unwanted bacterial infections.

I don’t have diabetes, but I was plagued with yeast overgrowth on a high carb diet. Since going low carb there has been not a single sign of it!!

To me, this is the biggest improvement in my health.  Gary told me I should do a TEDx talk in the impact of high carb vs low carb for someone like me who has had such nasty yeast infections in the past. Sounds trivial, but if it is severe it makes you lose concentration, sleep and impacts your sex life.

Since going low carb I’ve had no thrush. I am surprised that I have also had only minimal symptoms of menopause, despite a family history of marked symptoms and medication.

I think it is SO important to discuss reducing carbohydrates and sugar for all women’s health, not just for women with diabetes. Every woman I speak to has their own health story.

I noticed that a few of the women on the TYPEONEGRIT Facebook group who achieve excellent blood glucose levels were talking about using different basal insulin patterns around their monthly cycle.

It’s surprisingly hard to find much information on the topic.  One useful piece of guidance is from Lois Jovanovic MD who says

Usually, a woman’s insulin requirement goes up 10 to 15% during the last 3 to 5 days of the menstrual cycle due to the hormone progesterone. This is the hormone that prepares the uterus to be full of extra tissue and blood to receive the egg, if it is fertilized. Rising levels of progesterone counteract that action of insulin.[6]

It seems that as progesterone increases through the luteal phase insulin resistance also increases.[7] [8] [9] 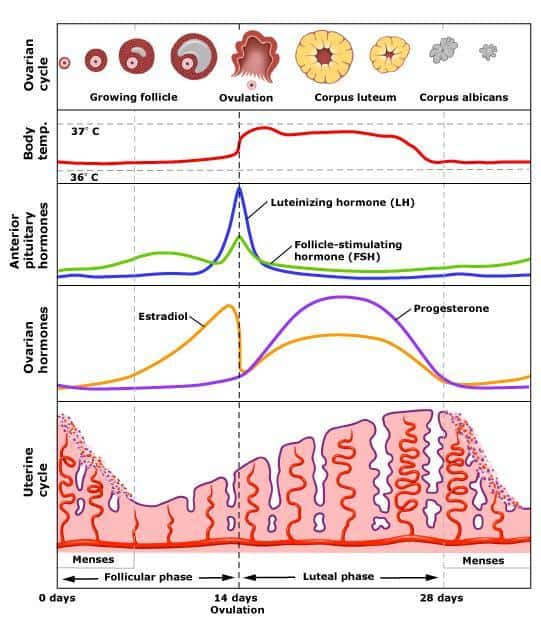 For Monica it’s never been that scientific or precise.  There would typically be a time where she wouldn’t be feeling herself, “felt fat” and bloated and would then get frustrated that her blood sugars were all over the place and she’d lost control.  Then all of a sudden everything would be back to normal when her period hit.

On a Diabetes Unscripted podcast Katie Coleman discussed her approach to managing these variations, which includes tracking her monthly cycle with a reminder in her diary at ‘that time of the month’ including the new recommended basal insulin rates.  Katie uses the Kindara app to track her cycle and hence can forecast when she will need to adjust the basal rates on her pump.

After hearing Katie’s story I thought it would be interesting to see if we could learning anything from Monica’s insulin pump data.   While there is a lot of variation in the data in the plot above you can see that there is certainly a regular monthly cycle to the data.  When I looked at the numbers there was definitely one day every four weeks or so when the insulin requirement spiked in the lead up to her period.

What this means is that in the four days leading up to the period each month a woman with type 1 diabetes could set her basal insulin to about 10% more than her normal basal insulin rate to manage her blood glucose levels over these four days.

For the rest of the population who do not have type 1 diabetes it’s interesting to see the correlations between higher insulin demand and water retention, mood, food cravings and blood sugar control that are often part and parcel with ‘that time of the month’.

I know from personal experience (as a male) that when I transition into ketosis with lower insulin levels my overall fluid retention and overall puffiness decrease.   I find myself heading to the toilet more often.  This makes me wonder to what degree oscillating insulin levels (along with estrogen and progesterone) play in the symptoms relating to the monthly female cycle.  Could a diet lower in processed carbohydrates that lowers insulin levels help decrease the mood swings and other fluctuations that come with the monthly hormonal cycle?

While there are anecdotal stories out there about how a paleo or ketogenic diet can lead to Amenorrhoea[10] (i.e. loss of regular menstrual cycle); however many would say that is the body’s response to a lack of calories rather than a well formulated ketogenic diet.  At the same time though there are heaps of anecdotes around the negative symptoms relating to ‘that time of the month’ being reduced on a ketogenic diet.[11] [12]

Perhaps this is another case for finding your optimal dietary glucose load where you can optimise blood glucose levels and possibly moderate hormonal fluctuations without going to the point of starvation where your body decides that survival is more important than reproduction.

it’s not just about the food

Again though, it’s not just about the food.  There are many other factors that will affect your insulin sensitivity such as sleep, genetics, exercise, circadian rhythms and gut bacteria as eloquently discussed in this video by Tommy Wood.