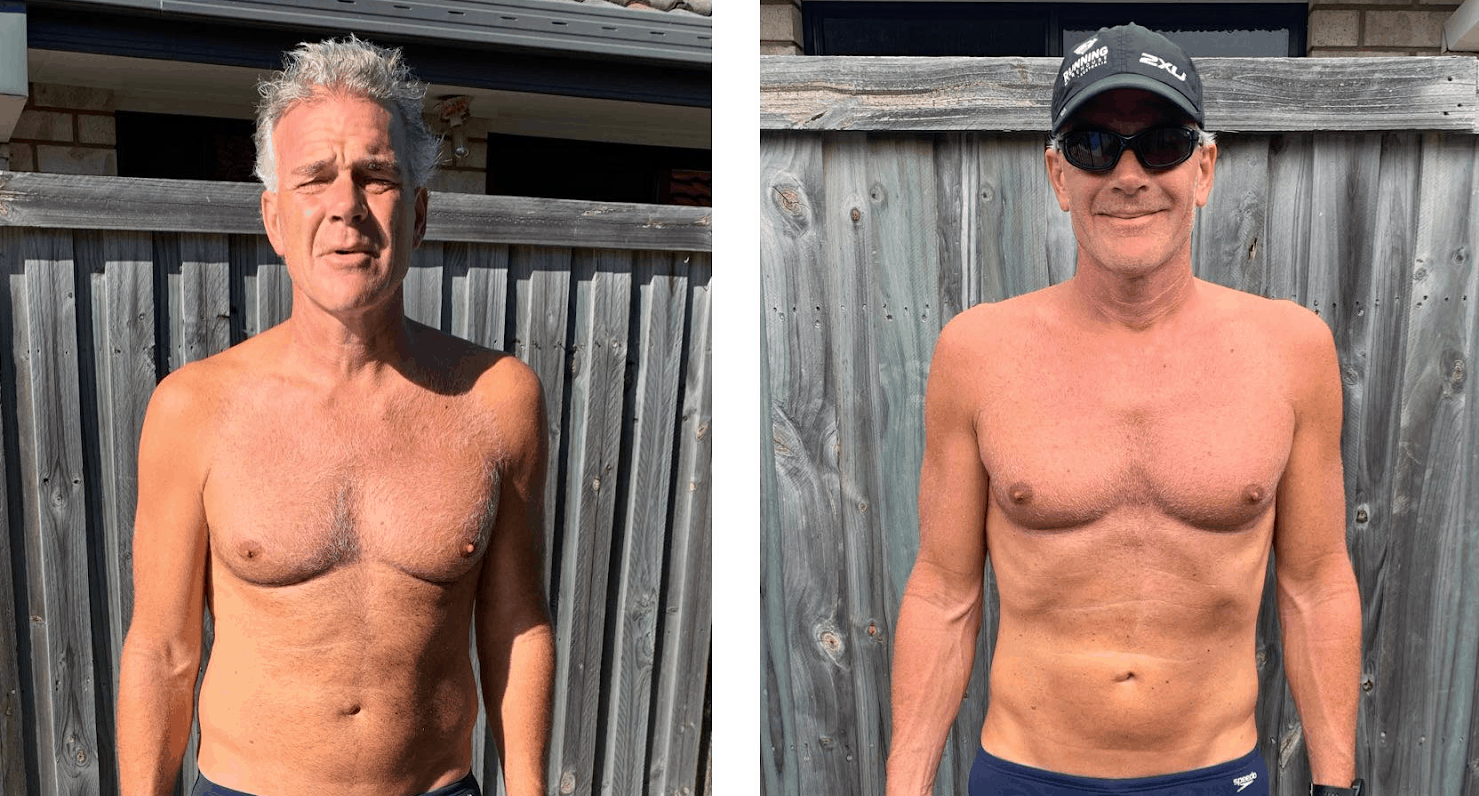 Meet 57-year-old Jeff who is a paramedic on the Sunshine Coast, north of Brisbane, Australia.

With plenty of stressful shift work, feeling and performing at his best is critical and enables him to think clearly and help people when they need it.

Over the years, Jeff has worked hard at his diet and fitness.  In his words:

I have been a health fanatic and avid exerciser for the majority of my life, and especially so for the last 30 years.

Despite my fixation with diet and health I have never been able to truly find optimal nutrition, you know, where you look good, feel great, and have the biomarkers if superior health.

I tried virtually every form of “healthy” eating in an attempt to find the holy grail. Really, how hard could it be if you are super committed!!

I was as dedicated and committed as anyone and it is bloody hard!!!

Let’s see, I was a poster boy for vegan eating for 5 yrs. And I was a perfect vegan!! All “healthy food”. Tons of brown rice, fruit, vegetables, pasta. The end result was lots of energy, but about 10kg of body fat I could never lose, despite training 20+ hours a week doing Ironman triathlons! I also had hypertension. How could that be!!

Moving on from there I only ate raw food for about a year, then did the 40-30-30 Zone diet for about a year and a half, before eventually transitioning into paleo low carb and into keto about 6 years ago.

I made tremendous gains eating keto/low carb. So much so that I finally felt that I had it figured out. FINALLY!! I lost all of the excess weight/body fat.

Was super happy with how I looked. No more hypertension. Macros with my keto way of eating were about 5% carbs (20g) 15% protein (about 60-80g) and a ton of fat!! And I mean a ton of fat (I ate butter by the spoonful). But despite great metrics, I still felt like crap. Absolutely awful.

I had agonising fatigue, gas and gut irritability galore. Year after year I never gave up on keto despite my crippling fatigue. I just “felt” that Keto had to be right. How could it not be? I had lost all of my excess BF, was pleased with my appearance, and had excellent metrics. But I never felt good. felt worse than I ever had in my life.

I was so disappointed. I’d even say depressed. None the less I would persevere with keto until I couldn’t take the fatigue any more. Then I would “explode” and have a binge day that would kill most people (I’m talking about 10,000 calories of non-stop junk food).

First only 1 binge day, but then the next month it would be 2 consecutive, then eventually an entire week of eating crap (you know the cycle).

After each glutton-fest, I would return to keto with a vengeance. And every single time the terrible fatigue would return. Just writing this I can’t believe how stupid I was.

It’s amazing how stupid one can really be. Sticking to a rigid strict way of eating because the “manual” says that’s how it has to be done. Sheesh.

And then, after what was definitely my last kick at the low carb way of eating, I discovered Optimising Nutrition.

What your program has done Marty and Alex,  together with Ted Naiman’s principles of protein vs energy, has resulted in what I can only describe as the PERFECT way of eating.

During the six-week Masterclass, Jeff learned to identify his kryptonite foods and focus on the foods that his body needs.  He tamed his inner lizard brain with good food so it was less likely to rebel with a rebound binge.

He eventually found that around 65 g per day of non-fibre carbs made him feel his best and would help him to avoid headaches and fatigue.

Jeff also found he needed to drop back the added fats and chose leaner cuts of meat to kickstart his fat loss and increase his protein percentage.

This is a common realisation for people who have been following a low carb or keto diet believing that higher ketones equate to body fat loss.

Hi Marty. I thought I’d share this reflection with you after recently completing the Nutrient Optimiser masterclass.

I needed to let you know how much of a success this program has been. For both myself and my wife Kate, it has literally changed our lives. Marty,

I have learned, FINALLY, that eating is about nutrition, energy, and structural maintenance/building.

The end result is the best I have ever felt in my entire life.

I feel fantastic! And I’m very happy with my appearance.

I never would have dreamt that I could feel so satiated on 1700 calories!!!

I wanted to say the biggest “thank you” to you Marty.

And this means so much more to me than physical benefits. You have enabled me to get to the point I always thought was theoretically possible, but somehow could never reach.

The emotional impact that your program has had on me after a lifetime of searching is indescribable.

Thank you so much.

And the even nicer part of Jeff’s story is that he was able to take the journey of Nutritional Optimisation with his wife Kate who was able to lose 5.8 kg (or 13 lbs) in the six weeks!

And, together they were able to put in place some new habits that will set them up for the future.