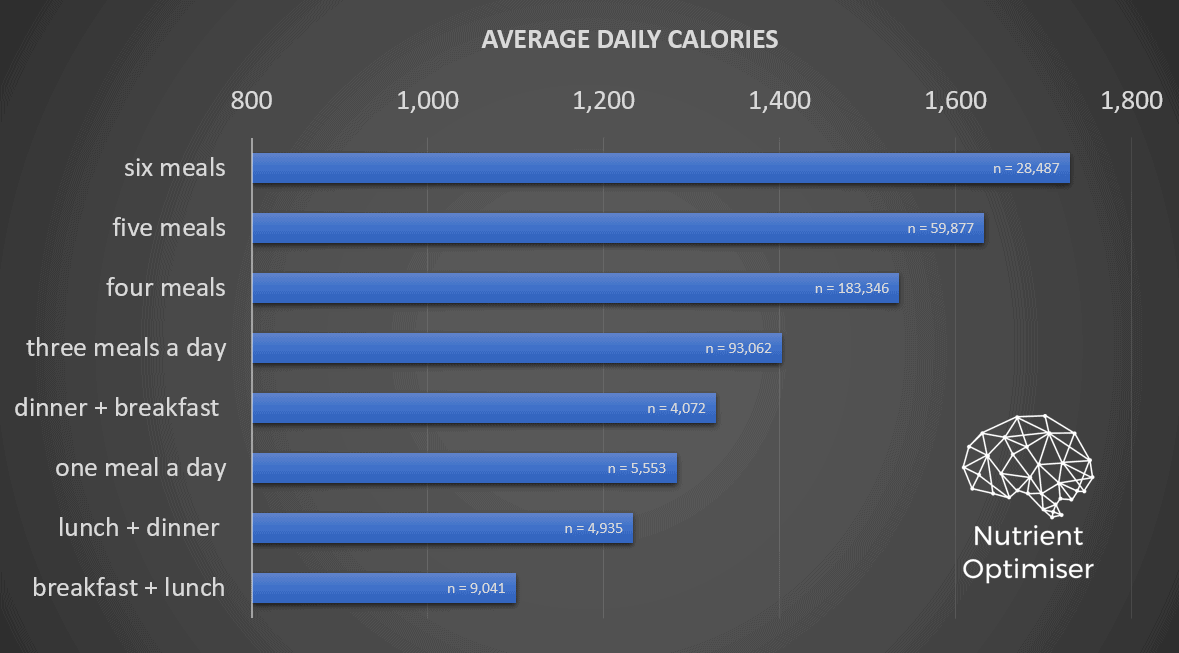 Having access to half a million days of MyFitnessPal data to validate and bust dietary myths recently has been a lot of fun (in a nerdy data geek sort of way).

Another obvious question to ask is how many times to eat a day to reduce your chance of overeating to stay lean, manage diabetes or lose body fat.

Most MyFitnessPal users seem to log their foods as meals rather than just entering them in one big lump.  And even after we clean up the data, we have nearly four hundred thousand days of data to analyse.

The chart below shows the number of times people said they ate per day versus the percentage of their goal calories that they consumed.

The data analysis suggests that:

The table below shows the numbers that sit behind the graph.

Some people recommend keeping the metabolic fire soaked with lots of small meals.  However, the data confirms that most people aren’t able to restrain themselves if given the opportunity to eat frequently.

A recent study by Satchin Panda tracked via a smartphone app and found that the 10% of people who ate the least frequently actually ate 3.3 times per day!   The top 10% of people ate more than ten times per day.  As shown in the ‘feedogram’ below, the only time people didn’t eat was while sleeping.  People typically met their calorie needs for weight maintenance by 6:36 pm but kept on eating until they got to sleep at 11 or 12 o’clock.

Perhaps one meal a day doesn’t work so well because you are SOOOO hungry by the time you get to eat that you keep on eating and eating and eating; more than you would if you weren’t as hungry when you started eating.  And if you are at home with unlimited access to the fridge and cupboard from dinner time until you go to bed, you can still get a lot of food in!

You would likely find it difficult to get as much high-satiety protein in one large meal compared to two smaller meals.  You’ll probably need to reach for more energy-dense, lower nutrient density, lower protein foods to get all your daily calories in one sitting.

Perhaps three meals a day doesn’t work well because we have more opportunities to eat than we really need, especially at home in front of the TV with unlimited access to the fridge and cupboard that are often stacked with low-protein comfort foods.

Two meals per day is a nice balance that enables us to eat satiating nutrient-dense whole food meals while still providing a significant fasting window during which time the body is able to practice drawing on our fat reserves.

It’s also easier psychologically because you’re not always thinking about food and restricting your intake.  You eat well in the allotted time and then get on with your day, knowing you have had the food you need.

To be clear, as discussed in detail in this article, I’m not saying that reducing meal frequency works because it reduces insulin which leads to fat loss without regard to energy intake.

Limiting your opportunities to eat by compressing your eating window is merely a great hack to manage your energy intake.  This, in turn, leads to a reduction in body fat levels, lower insulin levels and reversal of diabetes.

What meal to eat to lose weight?

So by now, you’re probably wondering “If you’re going to eat only two meals per day, which two meals should they be?”

The table below shows a summary of the data for people who logged two meals per day.

The chart comparing the three scenarios is shown below.  The analysis of the data suggests that:

If you chose to cut down to two meals per day then consuming them as breakfast and lunch may help you cut around 200 calories per day (or 17%) of your intake compared to consuming breakfast and dinner.

The table below shows the scenarios sorted from smallest intake to largest.

This chart shows the comparison of meal scenarios in terms of calories per day.

Whether you view it as restricting opportunities for overeating or better alignment with your natural circadian rhythm (or a bit of both), it seems that limiting your feeding window to earlier in the day (eTRF) is a potentially useful way to manage your food intake.

6 thoughts on “How Many Times Should I Eat a Day to Lose Weight? Is One Meal a Day Better than Two?”