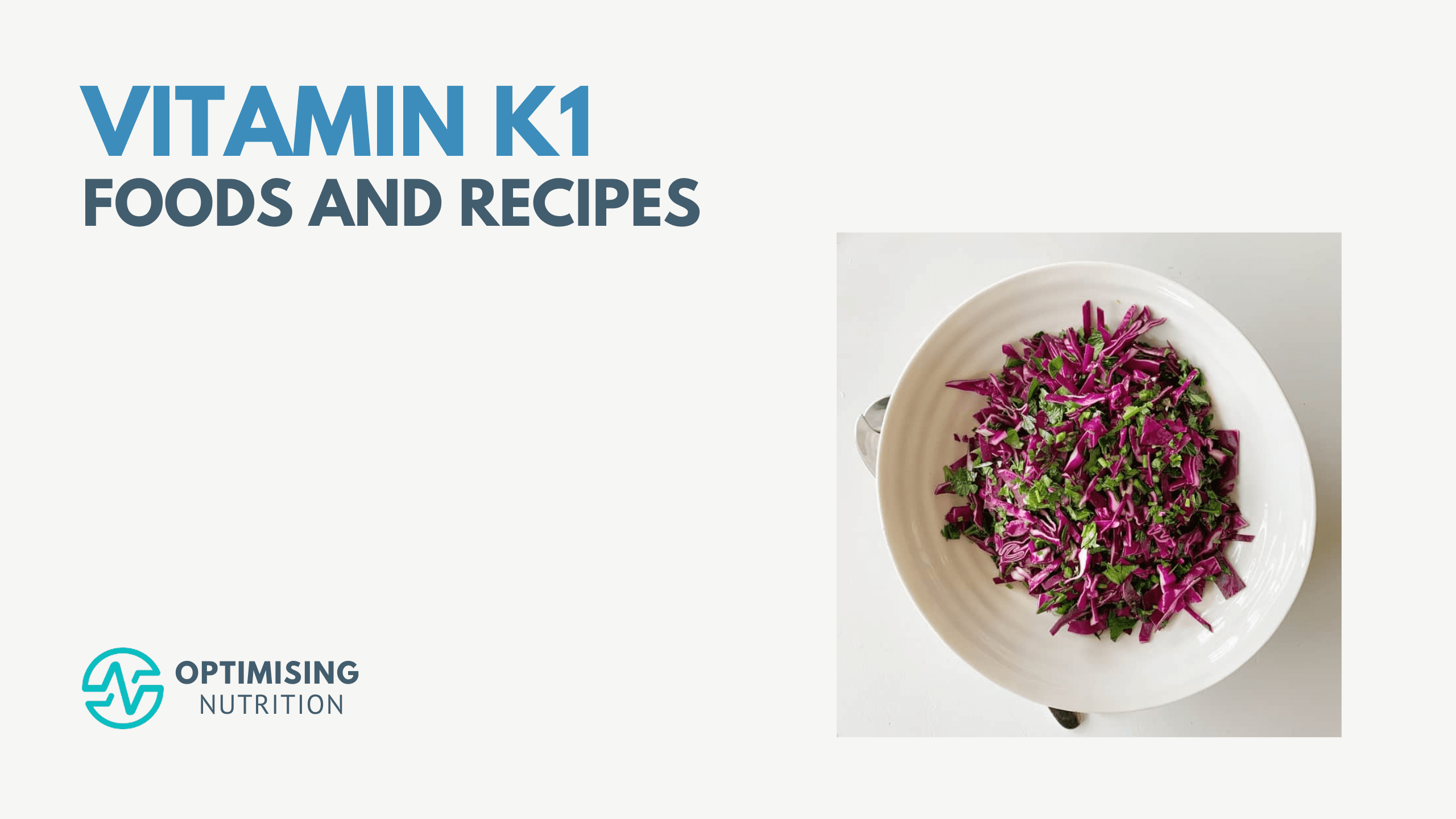 Vitamin K is a fat-soluble vitamin found in food as vitamin K1 (phylloquinone) and K2 (menaquinone).

Although both forms of vitamin K have different functions and are found in various foods, their structures are similar, and so are some of their roles.

Vitamin K1 (phylloquinone) is an essential fat-soluble nutrient that makes up around 75-90% of all vitamin K consumed by humans.  It is mainly found in green and leafy vegetables.

In this article, we will be focusing on vitamin K1.

What Does Vitamin K1 Do in Your Body?

Interestingly, the K comes from the Danish word “koagulation”.  So while Vitamin K1’s claim to fame is predominantly blood clotting, K2 has many other roles in your body.

Vitamin K1 is said to have a lower absorption rate than vitamin K2, with estimates as low as 10% of the vitamin being absorbed.  This could be because K2 foods are often richer in fat, whereas K1 sources are often leafy green vegetables which are low in fat.

Unfortunately, most nutritional databases only quantify vitamin K1, so it’s hard to know if you’re getting sufficient K2 when you track your food in Cronometer.

People on a strict vegan diet will get plenty of K1 but less K2.  On the contrary, people on a carnivorous diet may get K2 and little K1.

Although the conversion factor varies, most people can convert adequate K1 to K2.  However, it’s unclear if we can convert K2 to K1 or even need to because K2 is the more active form.

Although vitamins K1 and K2 have similar structures, we don’t tend to find them in the same foods.  For this reason, we’ve provided a list of high K1 foods so you can get an idea of where to find them.

For more details on Vitamin K2 and where to find it, see Vitamin K2 in Food: Your Complete Guide.

Some popular foods that contain more vitamin K1 per calorie include:

Recipes from our NutriBooster recipe series that contain the most Vitamin K1 per calorie are shown below.  You can click on the recipe name to open the recipe.

What Are the Symptoms of Vitamin K Deficiency?

Due to its role in effective blood clotting, inadequate vitamin K1 intake may cause unexplained or uncontrolled bleeding.

Because K1 can convert into K2, low K1 consumption may contribute to bone disorders like osteoporosis and heart disease.

Other symptoms of vitamin K deficiency are:

People at risk for vitamin K deficiency include:

Vitamin K is often given to counteract medications that thin the blood, like Warfarin, and to newborns to protect from life-threatening bleeding in the skull.

Does vitamin K Cause Blood Clots?

Because of vitamin K’s role in blood clotting, many assume that the vitamin can prompt blood clots to occur.

However, vitamin K is critical for synthesising proteins needed for blood clotting.  Therefore, simply consuming more does not necessarily result in more clotting activity.  If anything, it may regulate your body’s ability to clot.

Nonetheless, vitamin K can counteract the effects of medications like Warfarin or Coumadin—even if it’s sourced from food!

Our satiety analysis indicates that Vitamin K from food has a moderate influence on satiety.  People getting more Vitamin K1 in their food tend to consume 20% fewer calories than those consuming less vitamin K1.

But because vitamin K1 is often found in low-energy-density, nutrient-dense green and leafy vegetables, this decreased calorie intake may simply result from someone consuming a well-formed diet that supplies the complete spectrum of macro and micronutrients.

Not enough is known about levels of vitamin K that contribute to deficiency to set a Recommended Daily Allowance (RDA).

Thus, Adequate Intake (AI) of 120 micrograms (mcg) for men and 90 mcg for women have been set based on the typical intake in healthy populations.

For comparison, the average intake of Vitamin K1 for our Optimisers is 533 micrograms (mcg) per 2000 calories, which is nearly four and five times the Adequate Intake!

Based on our satiety analysis, we’ve set a K1 stretch target of 1100 mcg for men and 880 mcg for women.  This is based on our Optimisers’ 85th percentile nutrient intake, and the point in the chart above aligns with less benefit of getting more vitamin K1 per calorie.

Once you have started to get the hang of nutrient density and you’ve consistently hit the AI and average Optimiser’s Intake, you could ‘level up’ by targeting these stretch targets for more optimal nutrition.

Vitamin K works synergistically with vitamins A, B3, B6, C, D, E, calcium and manganese.

In other words, vitamin K can’t carry out any of its fundamental processes without the help of these other nutrients.  For this reason, we recommend consuming vitamin K from a nutrient-dense diet to get the complete profile of synergistic nutrients.

Vitamin A is also an antagonist, but eating a nutrient-dense diet containing plenty of vitamin A and K from whole foods should not cause any alarm; problems with antagonists only tend to arise from extremes.

Aside from nutrients, vitamin K is also depleted by blood-thinning drugs like Warfarin.  This is because they inhibit vitamin K recycling, which is necessary for blood clotting.  Thus, long-term use of these medications can contribute to vitamin K deficiency and conditions related to low vitamin K, like decreased bone density.

How Do I Calculate My Vitamin K1 Intake?

If you’re interested in checking if you’re getting enough vitamin K in your diet, you can see your very own nutrient profile using our Free 7-Day Food Discovery Challenge.