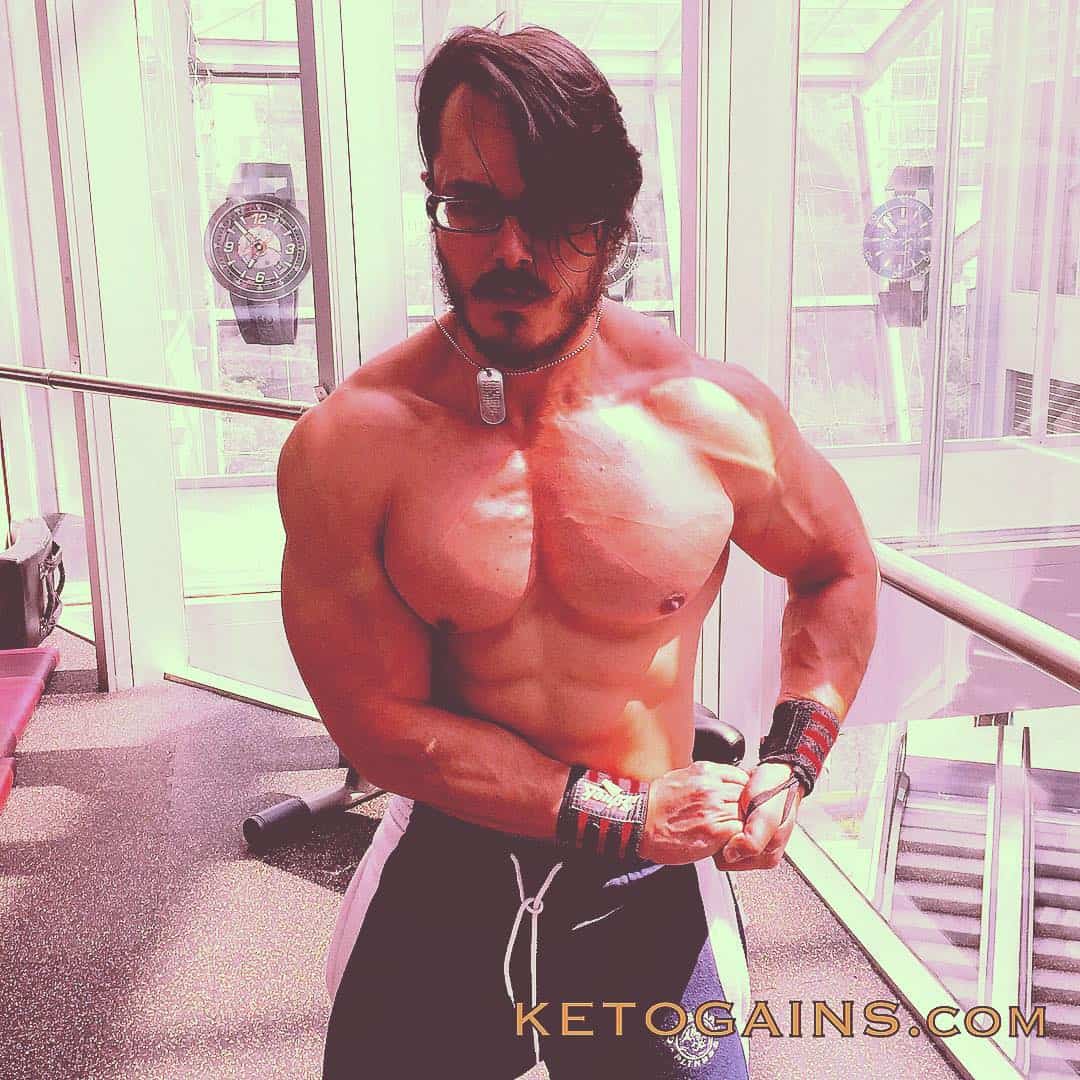 Fine tuning your diet to suit your goals – Darth Luiggi

It looks like Luis Villasenor is doing something right.

Luis (aka Darth Luiggi who runs the Ketogains Facebook Group) has been on a ketogenic diet for more than 14 years!

Here are a couple of video interviews where Luis explains his approach.

He is also very active in coaching the more than 7000 Ketogains members on his Facebook group and Reddit.

Recently I was able to get a look at a few days of Luis’s food diary on My Fitness Pal so I thought it would be interesting to run some numbers on his diet.

My focus of the blog has been on optimising diet for diabetes management, however I wanted to also demonstrate that a nutritious low insulin load diet is also great for health and fitness.

The analysis below shows the combination of three meals.  Along with plenty of protein (beef, chicken, egg, pork) he also has a solid amount of vegetables (broccoli, lettuce and spinach) as well as a good amount of added fats (butter, olive oil and coconut oil) to maintain ketosis.

The nutritional analysis of these three meals is shown below.  As you would expect from the dude who runs Ketogains, the carbs are low at 5% with the protein being fairly substantial at 29% of daily calories.

A score of 100 means that you will meet the recommended daily intake (RDI) for all the nutrients with 1000 calories, as discussed in the previous ‘the most nutrient dense food for different goals’ article.

The table below shows how Luis’s diet stacks up based on the nutritional ketosis weighting.

At 26g of fibre per day his fibre score is solid but not high compared to the other meals analysed.  His calorie density is high but that isn’t a big issue given that he is already fairly lean.

The insulin score is not extremely high as there is a solid amount of protein and he’s not worried about diabetes or achieving therapeutic ketosis.

The vitamin and mineral score is the one area that could be improved, though it is better than average.

As you will hear on the videos, Luis is already a big advocate for leafy greens as an integral part of a ketogenic diet.

If we did want to improve the vitamin and mineral score we could simply add extra spinach and broccoli (or any of the nutrient dense veggies from this list).

I’ve dropped the lettuce (which is not as nutrient dense) and increased the broccoli and spinach so we have 400g of each across the three meals.

The resultant nutritional analysis for the revised food diary is shown below.  The nutrient balance score has increased from 58 to 70 and we’d only have 8g of net carbohydrates per meal in spite of the significant increase in vitamins and minerals.

With the increase in non-starchy veggies we increase the fibre intake from 26g to 40g across the three meals which would mean that he would now meet the recommended daily fibre intake of 30g per day for men.

The other advantage of this approach is that it would be more filling which may lead to a decreased overall calorie intake.  While Luis knows the power of a ketogenic diet for weight loss he also knows that to get such a low percentage body fat you also need to run in a calorie deficit and this approach may assist in naturally controlling appetite and satiety.

He is currently in a ‘cutting phase’ which is why he is tracking his food intake in My Fitness Pal, so reducing his calorie density and increasing fibre might help him to spontaneously achieve a reduction in overall energy intake.

If you’re interested in using the ketogenic diet as part of a bodybuilding routine I would definitely recommend checking out Ketogains.  Even though he looks tough with all those muscles he’s really polite, gracious and only too willing to help other people on the journey.  And regardless of your goals, Luis’s Ketogains calculator is an excellent tool if you want to calculate your macros or target grams of protein, fat and carbs.