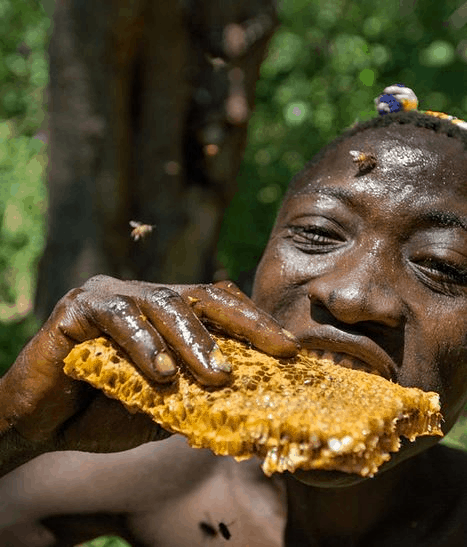 In Robb Wolf’s new book Wired to Eat he talks about the dilemma of optimal foraging theory (OFT) and how it’s a miracle in our modern environment that even more of us aren’t fat, sick and nearly dead.[1]

But what is optimal foraging theory[2]?   In essence, it is the concept that we’re programmed to hunt and gather and ingest as much energy as we can with the least amount of energy expenditure or order to maximise survival of the species.

In engineering or economics, this is akin to a cost : benefit analysis.  Essentially we want maximum benefit for minimum investment.

In a hunter-gatherer / paleo / evolutionary context this would mean that we would make an investment (i.e. effort / time / hassle that we could have otherwise spent having fun, procreating or looking after our family) to travel to new places where food was plentiful and easier to obtain.

In these new areas, we could spend as little time as possible hunting and gathering and more time relaxing.  Once the food became scarce again we would move on to find another ‘land of plenty’.

The people who were good at obtaining the maximum amount of food with the minimum amount of effort survived and thrived and populated the world, and thus became our ancestors.  Those that didn’t, didn’t.

You can see how the OFT paradigm would be well imprinted on our psyche.

OFT in the wild

In the wild, OFT means that native hunter-gatherers would have gone bananas for bananas when they were available…

… and eat the fattiest cuts of meat and offal, giving the muscle meat to the dogs.

But what happens when we translate OFT into a modern context?

Until recently we have never had the situation where nutrition and energy could be separated.

In nature, if something tastes good it is generally good for you.

Our ancestors, at least the ones that survived, grew to understand that as a general rule:

But now we have entered a brave new world.

We are now surrounded by energy dense hyper-palatable foods that are designed to taste good without providing substantial levels of nutrients.

Our primal programming is defenceless to these foods.  Our willpower or our calorie counting apps are no match for engineered foods optimised for bliss point.

These days diabetes is becoming a bigger problem than starvation in the developing world due to a lack of nutritional value in the foods they are eating.[3]

The recent industrialisation of the world food system has resulted in a nutritional transition in which developing nations are simultaneously experiencing undernutrition and obesity.

In addition, an abundance of inexpensive, high-density foods laden with sugar and fats is available to a population that expends little energy to obtain such large numbers of calories.

what happens when we go low fat?

So if the problem is simply that we eat too many calories, one solution is to reduce the energy density of our food by avoiding fat, which is the most energy dense of the macronutrients.

The satiety index demonstrates that there is some basis to the concept that we feel more full with lower energy density, high fibre, high protein foods.[5] [6]   The chart below shows how hungry people report being in the two hours after being fed 1000 kJ of different foods (see the low energy density high nutrient density foods for weight loss article for more on this complex and intriguing topic).

However the problem comes when we focus on reducing fat (along with perhaps reduced cost, increased shelf life and palatability combined with an attempt to reach that optimal bliss point[7]), we end up with cheap manufactured food-like products that have little nutritional value.

Grain subsidies were brought in to establish and promote cheap ways to feed people to prevent starvation with cheap calories.[8]  It seems now they’ve achieved that goal.[9]

Maybe a little too well.

I am pretty burned out on the protein, carbs, fat shindig. I’m starting to think that framework creates more confusion than answers.

Thinking about optimum foraging theory, palate novelty and a few related topics will (hopefully) provide a much better framework for folks to affect positive change.

The chart below shows a comparison of the micronutrients provided by the least nutrient-dense 10% of foods versus the most nutrient dense foods compared to the average of all foods available in the USDA foods database.

The quantity of essential nutrients you can get with the same amount of energy is massive!  If eating is about obtaining adequate nutrients then the quality of our food, not just macronutrients or calories matters greatly!

what happens when we go low carb?

So the obvious thing to do is eliminate all carbohydrates because low fat was such a failure.  Right?

So we swing to the other extreme and avoid all carbohydrates and enjoy fat ad libitum to make up for lost time.

The problem again is that at the other extreme of the macronutrient pendulum we may find that we have limited nutrients.

The chart below shows a comparison of the nutrient density of different dietary approaches showing that a super high fat therapeutic ketogenic approach may not be ideal for everyone, at least in terms of nutrient density.  High-fat foods are not always the most nutrient dense and can also, just like low-fat foods, be engineered to be hyperpalatable to help us to eat more of them.

The chart below shows the relationship (or lack thereof) between the percentage of fat in our food and the nutrient density.   Simply avoiding or binging on fat does not ensure we are optimising our nutrition.

While many people find that their appetite is normalised whey they reduce the insulin load of their diet high-fat foods are more energy dense so it can be easy to overdo the high-fat dairy and nuts if you’re one of the unlucky people whose appetite doesn’t disappear.

what happens when we go paleo?

So if the ‘paleo diet’ worked so well for paleo peeps then maybe we should retreat back there?  Back to the plantains, the honey and the fattiest cuts of meat?

But for the rest of us that aren’t insanely active, then maybe simply ‘going paleo’ is not the best option…

… particularly if we start tucking into the energy dense ‘paleo comfort foods’.

If we’re not so active, then intentionally limiting our exposure to highly energy dense hyper palatable foods can be a useful way to manage our OFT programming.

A lot of people find that nutrient dense non-starchy veggies, or even simply going “plant-based”, works really well, particularly if you have some excess body fat (and maybe even stored protein) that you want to contribute to your daily energy expenditure.

Limiting ourselves to the most nutrient-dense foods (in terms of nutrients per calorie) enables us to sidestep the trap of modern foods which have separated nutrients and energy.  Nutrient-dense foods also boost our mitochondrial function, and fuel the fat burning Krebs cycle so we can be less dependent on a regular sugar hit to make us feel good (Cori cycle).

Limiting yourself to nutrient dense foods (i.e. nutrients per calorie) is a great way to reverse engineer optimal foraging theory.

If your problem is that energy dense low nutrient density hyperpalatable foods are just too easy to overeat, then actively constraining your foods to those that have the highest nutrients per calorie could help manage the negative effects of OFT that are engrained in our system by imposing an external constraint.

But if you’re a lean Ironman triathlete these foods are probably not going to get you through.  You will need more energy than you can easily obtain from nutrient-dense spinach and broccoli.

So while there is no one size fits all solution, it seems that we have some useful principles that we can use to shortlist our food selection.

So I think we have three useful quantitative parameters with which to optimise our food choices to suit our current situation:

I have used a multi-criteria analysis to rank the foods for each goal.  The chart below shows the weightings used for each approach.

The lists of optimal foods below have been developed to help you manage your primal impulses.  The table below contains links to separate blog posts and printable .pdfs for a range of dietary approaches that may be of interest depending on your goals and situation.

If you’re not sure which approach is right for you and whether you are insulin resistant this survey may help you identify your optimal dietary approach.

I hope this helps.  Good luck out there!