Does everything we eat cause heart disease?

I recently came across an interesting observational study from 1999 where researchers compared different components of the diet with heart disease rates using data from more than one hundred thousand participants in the Nurses’ Health Study.[1]   The analysis was interesting but somewhat confusing.  It seems that pretty much everything we eat is correlated with heart disease to some degree, but it’s hard to tell which component of our diet is the worst culprit. what do we know?

What we do know is that eating too much is not good for us.  Most of our western diseases are not due to malnutrition but rather over nutrition.  Our bodies just don’t deal well with too much energy on an ongoing basis.

We also know that most people struggle to regulate their appetite to achieve optimal weight or normal blood glucose levels.  Even when we resort to calorie counting we struggle to fight against the body’s desire to maintain a certain weight.  It’s hard to fight the drive to survive for too long.

I think the real challenge is to work out what we should eat that will help us to obtain adequate nutrients without requiring us to eat too much.  And then hopefully this will lead to regulation of our appetite and avoidance of overeating

The principle that the LCHF scene understands is that, for someone who is insulin resistant, eating foods that stimulate too much insulin will lead to excess energy storage and increased appetite. Fasting and / or a reduced insulin load dietary approach can help to reduce insulin levels and enable you to access more of your body fat stores for energy.

Once you’ve got your blood glucose and insulin levels under control and you still have more weight to lose you can focus more on maximising nutrient density of our food so we won’t keep on searching out more food to obtain more nutrients.

Then once blood glucose and insulin levels are normalised I think the next quest is to find what foods will maximise nutrition while enabling us to minimise energy intake.

Rather than worrying about protein, fat, carbohydrates we would be better served to focus on the foods that provide higher levels of nutrients that will leave us satisfied with less calories.  Rather than focussing on avoiding particular dietary components like saturated fat, cholesterol or carbohydrate might it be better to think in terms of what will maximise nutrient density.

The purpose of this article is to look at whether there is any relationship between nutrient density and any of the food parameters that we typically focus on.  Are there any parameters that correlate with nutrient density or are they all a waste of time?   To what degree does worrying about protein, fat, carbs, insulin load, saturated fat etc help us achieve a more nutrient dense diet that will lead to better health and avoid over nutrition?

Engineers and scientists like to develop mathematical relationships to try to understand the relationships between different parameters.

The chart below shows an example of a direct relationship.  In this example we see the data from the Ancel Keys’ Seven Countries Study[2] that suggested that, based on data from these seven studies, that more fat in the diet the more deaths we have from heart disease. Typically, things in nature are not direct relationships.  Often, some is better than none but too much is bad.  Think of it as the Goldilocks Zone.   Not too much, not too little, but just right.

It’s earlier to think in terms of good / bad, black or white, but many things in nature are not linear.  The chart below from Dr Ted Naiman demonstrates a parabolic relationship.  Often the optimal range lies somewhere between the extremes. The relationship that is of most interest to me is the one between the proportion of insulinogenic calories versus nutrient density.

The chart below shows that if we run a simple linear trend line (orange) then nutrient density declines with increasing insulinogenic calories.  However, if we run a polynomial trend line (red), we get a higher correlation. Nutrient density appears to peak around 10 to 40% insulinogenic calories.  If you have less than 10% you end up with a very high fat low protein diet and you will have to pay extra attention to make sure you get adequate nutrition.  If you run with a very high insulinogenic diet you risk ending up with excessed processed carbohydrates that often have low nutritional value.

This is a broad generalisation.  The massive amount of scatter in this chart demonstrates that we can find nutrient dense foods and nutrient poor foods at either end of the scale. On the left hand axis there are heaps of foods with zero carbs that have either high or low nutrient density.  What skews this analysis is the fact that foods with 100% carbohydrate and no fibre typically have a very low nutrient density.   It’s not that we should necessarily avoid all carbohydrates, but rather that we should avoid the processed ones and maximise the non-starchy veggies that have some fibre.

The story with total carbohydrates is similar.   The scatter in these charts is massive, but as a general rule it seems that foods with more carbohydrates have a lower nutrient density.  The take home message here seems to be that processed carbohydrates with minimal amounts of fibre are generally nutrient poor. The plot below indicates that a higher levels of protein are associated with higher nutrient density.   Nutrient density peaks at around 40% protein.   [Keep in mind that a lot of the amino acids are not counted in the nutrient density score to make sure protein doesn’t dominate the scoring.] Optimal protein levels are a contentious topic.  There is research out there that says that excess protein can be problematic from a longevity perspective.  Protein promotes growth, IGF-1, insulin and cell turnover which can theoretically compromise longevity.  At the same time there are studies that indicate that we need much more protein than the minimum DRI levels.[4]

Like excess anything, excess protein can be problematic.  In the end you need to eat enough protein to prevent loss of lean muscle.  If you’re trying to build lean muscle and actually working out, then higher levels of protein may be helpful to support muscle growth.  If you are trying to lose weight then higher levels of protein can be useful to increase satiety and prevent loss of lean muscle mass.

Lots of people will argue that you can’t go wrong with too much fat while others caution against excess fat.  The plot below shows the relationship between fat and nutrient density.  If you run a straight line trend line, then nutrient density increased with more fat.  This is at odds with what we have been told for the last four decades based on Ancel Keys’ Seven Countries study chart above. The polynomial trend line (red ) suggests that nutrient density peaks at around 50 to 60% of calories from fat.   This level is probably a good starting point for most people.  People aiming for therapeutic ketosis to manage cancer or epilepsy can increase the fat levels or decrease fat if they are going for weight loss and have their blood glucose levels under control.  Personal preferences, culture and activity are all relevant considerations.

It’s interesting to see the change in thinking in even the highest levels of research and the USDA dietary guidelines committee.  In this Dr Meir Stampfer from Harvard, one of the authors on the epidemiological article above, talks about how their advice to minimise fat was “bad advice” due to: 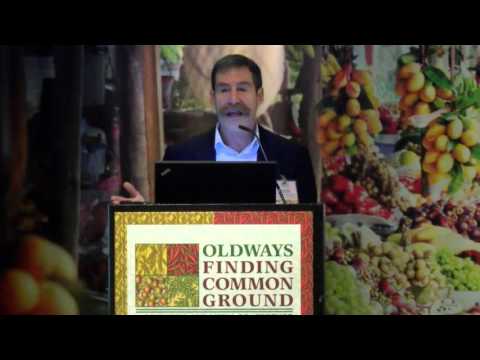 The chart below shows that nutrient density seems to increase as we increase saturated fat although the correlation is very low. Does this data mean you should eat as much saturated fat as you can?  No.

Does it suggest that saturated fat is not really an issue to be concerned about?  Maybe. The recent 2015 Dietary Guidelines Committee dropped cholesterol as a ‘nutrient of concern’ due to the lack of evidence that there is a relationship between dietary cholesterol and cholesterol in the blood.[7]

Does this mean you should go out of your way to eat high cholesterol foods?  Probably not.

Does this suggest that you don’t need to worry too much about the amount of cholesterol in your diet?  It seems so, yes.

The chart below shows the relationship between mono unsaturated fat and nutrient density. This aligns with the ‘common knowledge’ that monounsaturated fats from olive oils, nuts and avocadoes should be considered to be “good fats” in terms of nutrient density.

The chart below shows the relationships between nutrient density and the amount of polyunsaturated fat.   It seems that more poly unsaturated fat from sources such as cold water fish, dairy, eggs and nuts will provide a higher level of nutrition, though the correlation is quite low. which factors matter the most?