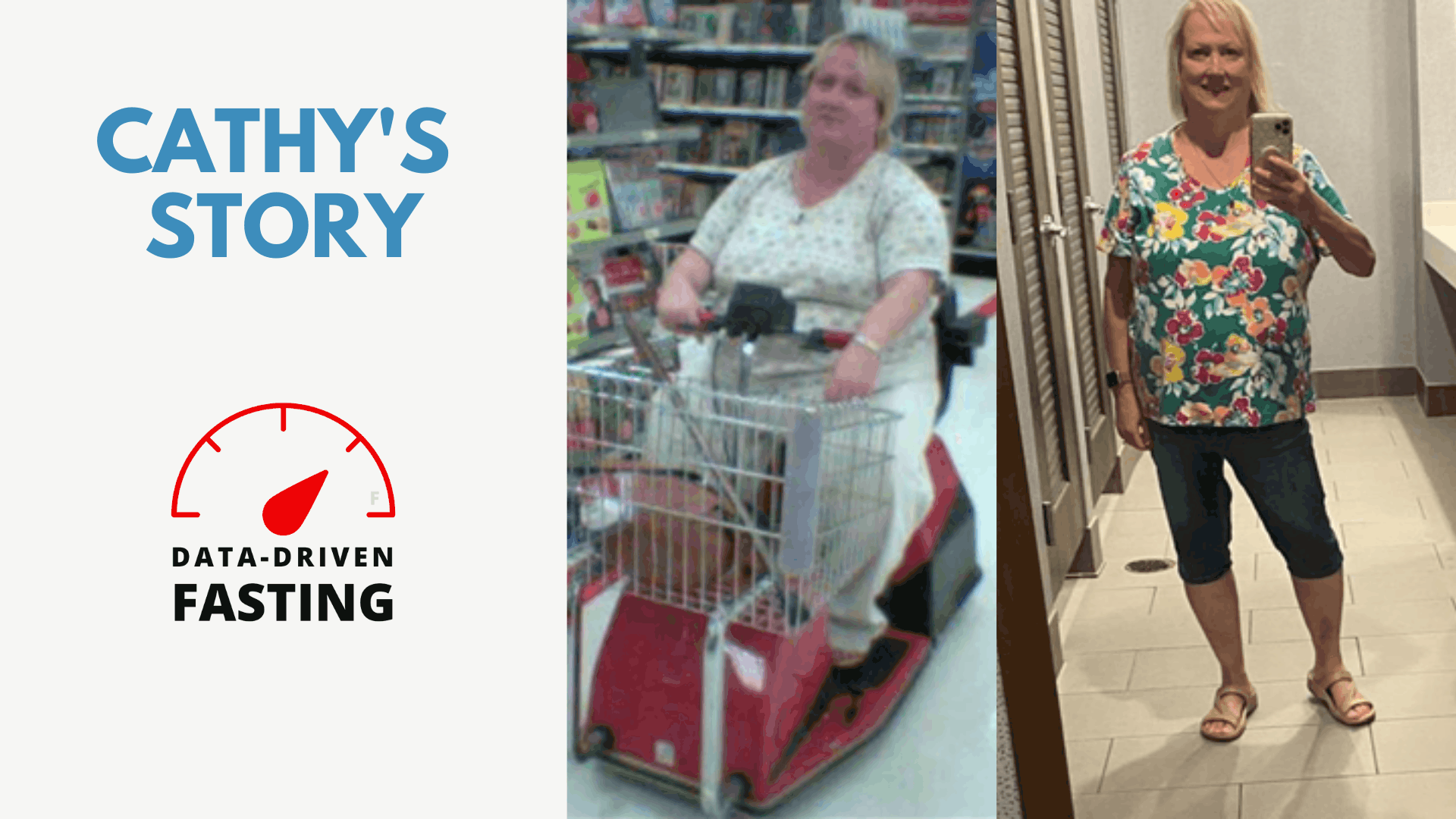 I’d wanted to share why Data-Driven Fasting is so important to me. But first, let me share my story.

I grew up with no weight issues. I was active and ate whatever mom cooked.  Both my parents grew up on farms. So I didn’t grow up with processed foods for the most part, except for some cereals and bread.  This photo is of my dad and me, back when when I was a teenager.

My family didn’t eat out. I didn’t have McDonald’s until a date when I was 16.  My mom believed in eating what was grown in our area. So, we ate plenty of beef, chicken, fish, pork and vegetables.

Then I married my husband, who was the opposite. His family were more socialites.  After getting married, I discovered some delicious tasting food that I had never experienced.

As newlyweds, we couldn’t frequent the types of places his parents treated us to, so we found what we could afford – Taco Bell, McDonald’s, buffets, and cheap fast food.

Six months after our wedding, I had gained 60 lbs!!!  I had to buy bigger clothes.

It wasn’t long before I entered the cycle of diet clinics, gyms, and eventually Weight Watchers (I’ve joined so many times, I lost track).  I’d lose, but the concepts I had used didn’t teach me how to eat well. So afterwards, I’d just go back to what I was doing previously.

This time my doctor put me on Weight Watchers. It was depressing because, as a pregnant member, I wasn’t allowed to weigh in. Thankfully, I didn’t gain too much but was still overweight after my daughter was born.

Every year, even though I’d be off and on whatever diet was out there, my weight climbed. Fortunately, because I was still young, my weight wasn’t causing medical issues (yet).

I had no idea that my weight could affect my health.

Working full time, being a mom and wife, I wanted to have as much “fun” as possible, so we ate out a lot. But, unfortunately, my weight continued to climb to almost 300lbs.

This is me with my first grandchild.  I now have nine.  I want to be around to see them grow up!

A colleague at work had weight loss surgery and was showing signs of success. We talked, and soon I was in a seminar learning all about it. Lap band surgery had not been out long, but progress had been made compared to some of the harsher weight-loss surgeries. At least I wasn’t being chopped up.  They pointed out that the band could be removed.

My insurance paid all but a small amount of the surgery due to comorbidities. So $300 out of my pocket for the psychiatrist visit, and that $18k surgery was mine.

I was on a liquid diet for four weeks before surgery (due to fatty liver) and two weeks after surgery (while healing). Finally, I was going to be thin again (or so I thought)!

I lost 25 lbs before surgery and about 20 lbs sometime after. I have a port that connects to the band and is filled with saline through the port. I was in and out of the doctor’s office with fills/and un-fills often.

I couldn’t even eat a fingernail-sized piece of chicken and keep it down. So I learned to chew my food to pieces.  But I couldn’t eat beef, lettuce, and so much else.

I had thought the lap band would be my dream.  But it turned out to be a nightmare!

Initially, after the surgery, I was off my diabetes and blood pressure meds.   But, I was having issues. I could barely eat.  To satisfy my hunger, I found creative ways to pack more calories into less food.  I would have butter, sugar, milkshakes, mashed potatoes – anything that was melted or mushy. As a consequence of the worsening food choices, my diabetes was getting worse!  My HbA1c was drifted up to 13%.

I just couldn’t cope with the band anymore. So I asked the doctor to take the saline out of the band.  I finally had a less tight band.  Not long afterwards, I gained back what I had lost, plus more. I didn’t care. I wanted to eat food again!!!

I eventually went back and had it filled and back for another un-fill and decided I’d have to do the work myself. If I wanted the band out, I’d have to pay. But I didn’t have an extra 18k in my back pocket.

So I went back to all the weight loss programs.  I went to anything that might help.

Then I had a stroke, which changed my life.

Thankfully I survived, but I’m not who I was before. I also have a heart condition. I was out of work for over a year going through rehab. Finally, they decided I was not fit to work and was classified as officially disabled.  But I chose to go back to work and try anyway.

I did well after much help and hard work. I was so thankful to be able to work. I began to walk regularly after the stroke. That was seven years ago.

Later I discovered keto and intermittent fasting after browsing YouTube.

Soon I was watching Dr Jason Fung’s videos and bought his books, and everyone else’s in that camp.  Gary Taubes was a favourite, and I swallowed it all, hook line and sinker.

I was in a popular fasting Facebook group, always trying to compete with the people who bragged about how long they fasted. A 20-hour fast was “good” for me.

I had keto books and cookbooks coming out of my ears.  I was beginning to loathe all the cheese I was eating on keto.

But I didn’t realise at the time I was missing so much good food. I didn’t drink bulletproof coffee but slathered butter on everything I could.

I lost weight initially with keto and IF, but then I couldn’t get it to budge. In my mind, I had suffered enough. I stuck to my Facebook groups.  I came across a member who said she wasn’t in the Jason Fung camp.  She claimed to eat what she wanted and kept the weight off. I perused her Facebook page, and she had some pretty excellent credentials. I needed to find out. I discovered she was in the Gin Stephens camp.  Who?  I didn’t know. So began another search to learn about intermittent fasting.

I found a YouTube interview Gin Stephens did with a “Marty Kendall”. I listened. This was very interesting,  But I began to listen to Marty and wanted to know more.  I knew this was something I had to try.

I had never connected the dots to understand how my blood sugar could guide WHEN and WHAT To eat to guide my health journey.

I suddenly realised that I could use my premeal blood sugars to manage when I ate!!!  What a revelation!

I haven’t been perfect. I had lots of questions and sometimes didn’t get it. I joined both Data-Driven Fasting and the Nutritional Optimisation Masterclass.  I used my blood sugar meter to guide my meal timing and calibrate my hunger.  I have also tracked my food and tried to improve the quality of WHAT I was eating.  That helped so much in terms of satisfying my hunger!

I’m about to start on my third Data-Driven Fasting challenge and want to keep improving.  I’m still sometimes a food bum.  It’s easy to let things go awry and slip back into old habits.   But conversely, I’ve learned how to get back on track quickly.

I’m a slow, stubborn learner. I pull mind games on myself and beat myself up sometimes. This has been a pattern that I had never broken before. The guilt I put on myself when I didn’t know that there was something I could do to get my mind off food constantly.

I’ve listened to almost all the podcasts Marty has done.  Thankfully I’ve learned that I don’t need to judge myself.  I can just follow the insights and data from my blood sugars to guide my eating journey.

Now, since starting with Data-Driven Fasting and the Masterclass, I’ve gone from 186 to 166 lbs and broken a three-year stall!  I’ve dropped my insulin from 70 units per day to nothing.

I’m still on Jardiace but am slowly dialling that back and hope to be off it entirely soon.

I’m making progress.  This is me before starting with Data-Driven Fasting and now.

I still have 50 pounds to go. However, I have such a drive to understand what I’m doing and celebrate how my body works. I can’t unsee what I’ve learned, nor do I want to.  I’m excited to share my newfound insights when they ask what I’m doing.

I know I’ll be slow, but I’m learning, practising, and repeating.  A secondary benefit is that reading and listening to podcasts have helped me with brain functions (that’s my other favourite subject.  I proved the plasticity of the brain and some re-wiring that has occurred using workarounds.

I encourage you to give Data-Driven Fasting a try.

Give it time. Be patient. Read, listen, learn.

You will get out of it whatever you put into it.

And it’s worth it. It’s your life. Make it the best you can.