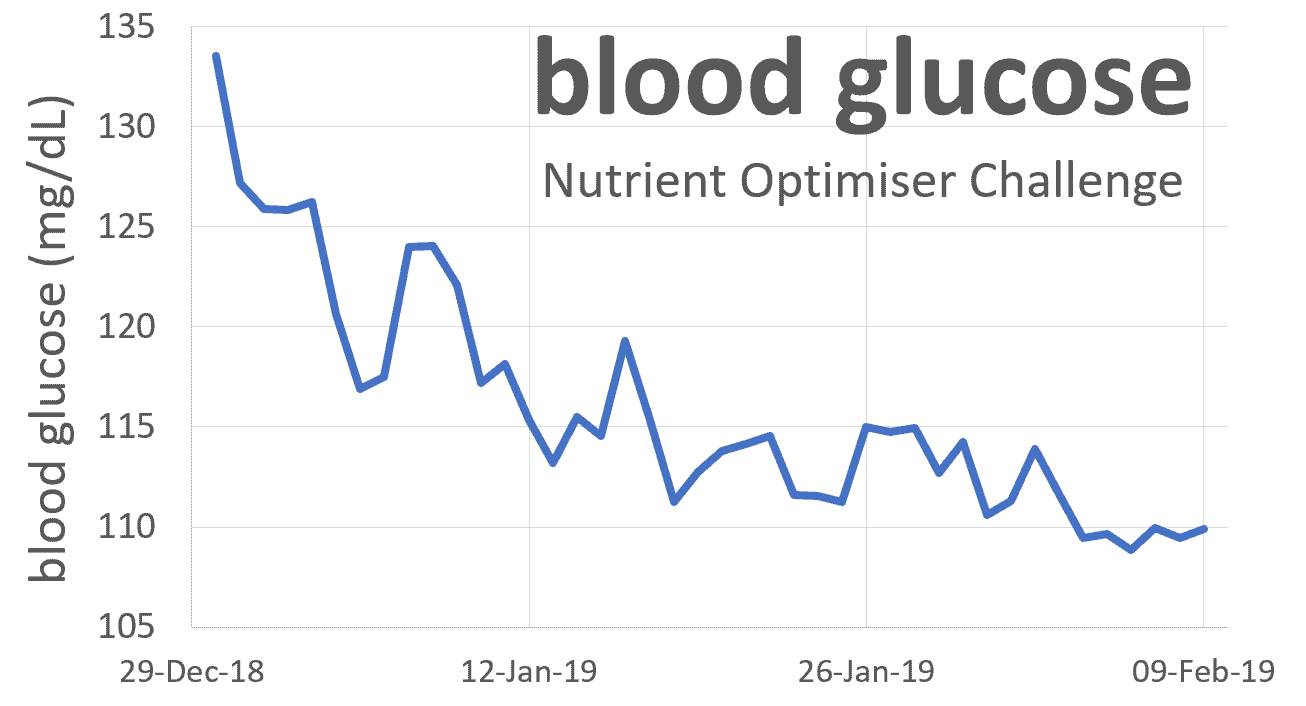 The diabesity epidemic is a growing challenge, not just to our metabolic health and waistlines, but our global economy, threatening to bankrupt countries with growing health care costs.

To help manage this, the Nutrient Optimiser has been designed to empower users to actively manage their blood glucose with their food choices.

The recent Nutrient Optimiser Challenge provided an opportunity to see how people in the real world responded in terms of blood glucose, ketones and insulin.   The major findings were as follows:

Seventy-six participants recorded daily waking blood glucose levels.   Users were encouraged to record their weight and blood sugars on a daily basis, but only look at the longer-term trends.

The chart below shows their average blood glucose values divided into three groups.

Participants with the highest starting glucose saw their blood glucose trend down, dropping by more than 20 mg/dL over six weeks (i.e. from diabetic to close to normal healthy levels).

Most participants found their blood sugars decreased quickly as they transitioned to a high satiety diet.  A number of the participants with elevated blood glucose found that they started to lose weight rapidly after a long term stall on a higher fat “keto diet”.

Blood glucose can be more volatile during weight loss as the liver increases gluconeogenesis to utilise stored energy.

The challenge highlighted that people hoping to reverse their diabetes need to find a balance between:

The chart below shows how Paul’s weight and blood glucose fell together, a clear demonstration of how blood glucose levels and body fat levels are related.

Brishti was able to reduce her HbA1c from 9.1 to 6.5% in two months using the Nutrient Optimiser.

Blood ketones took a little longer to rise for people who identified as insulin resistant and stayed higher for longer.

While chasing elevated ketones may be relevant for people targeting therapeutic ketosis (i.e. for the management of Alzheimer’s, Parkinson’s or Dementia), it seems that focusing on satiety and nutrient density tend to promote ketosis from body fat (endogenous ketones).

Weight loss continued throughout the challenge, regardless of whether users identified as insulin resistant or insulin sensitive.  Users’ fat loss was not correlated with:

The ketone data over six weeks aligns with the observations over the longer term from the two-year data from the Virta study.   While blood ketones can rise in the short term as someone starts to mobilise body fat, they are a poor marker of dietary compliance or fat loss in the longer term.

The chart below shows the total insulin dose for Monica Kendall (who manages her Type 1 diabetes on an insulin pump) during the challenge (the red line is a 14 day moving average through the individual daily insulin doses).

Monica’s insulin demand dropped by up to 50% once she started on the high satiety meal plans on 26 December 2018.

Towards the right-hand side of the chart, we see that her insulin demand began to drift back up as her energy intake stabilised at a lower level, even though she continued to lose weight.

Insulin appears to decreases in response to an abrupt change in energy intake but may return to baseline levels once energy intake stabilises.

To provide some context, the chart below shows Monica’s daily insulin dose over the last ten years.  Switching from a standard western diet to a low carbohydrate diet around eight years ago enabled her to decrease her daily insulin from 50 to 30 units per day.  However, during the challenge, her insulin requirements decreased to the lowest levels in her 30 years of having Type 1 diabetes.

While high-fat foods cause a slower insulin response, they still affect insulin requirements over the long term.  While low carb foods like nuts, cheese and cream can be a good way for people managing diabetes to obtain adequate energy, they do seem to trigger a long term insulin response. Focusing on higher satiety foods tends to reduce overall demand.

Overall, Monica was able to lose 7.5 kg or 10.7% of her body weight during the challenge as shown in the before and after photos below.

The results of the six-week challenge demonstrate that: