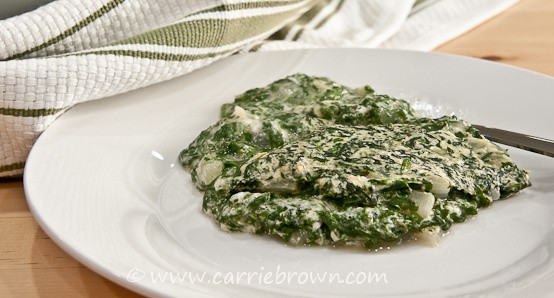 This baked creamed spinach recipe is from Carrie Brown’s Maramalade and Mileposts blog.

I sort of feel like I know Carrie after listening her host the SANE Shown with Johnathan Bailor.

Even though I’ve analysed nearly 200 meals, anything with spinach in it seems to keep coming to the top.

This recipe is unique in that it also includes konjac flour or glucomannan flour which has been shown to be an effective prebiotic fibre which fills you up by expanding significantly in the stomach while involving very few calories.

If you wanted to reduce the carb content further you could reduce the onions and coconut cream, though this would likely affect the palatability and enjoyment of the meal.

We haven’t tried this one at our place yet, but I think it looks like a nice change from the typical low carb fare.