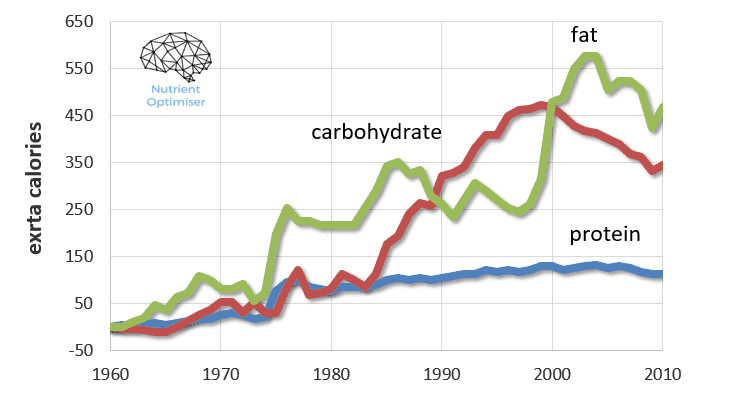 Why our food system is screwed (in charts)

You may have noticed that we’re getting fatter.  Obesity seems to be the new normal.

Some people say we’re lazy and that we  need to be more disciplined and move more.

But obesity likely also has something to do with what we’re putting in our mouth.[2]

In this article we crunch the numbers in an effort to understand what it is about our food is so different these days.

What changed in parallel with the booming obesity epidemic?

As they say, truth is often stranger than fiction.

Why should you care?

In the US alone, the cost of obesity to the healthcare system is $210 billion per year, with $4.3b lost due to absenteeism[5] and a further $506 per obese worker due to reduced productivity per year.[6]

At a personal level, being overweight will increase your chance of dying earlier with one of the common metabolic-related diseases.[7]

The cost of type 2 diabetes (which occurs when our fat stores can no longer absorb the excess energy coming in from our diet) is massive!  And it’s about to get a lot worse!

But it wasn’t always this way.  Many people have asked, “Why are we suddenly eating so much more?

Thanks to the USDA we have some useful data to help us answer this question.[8]  As shown in the chart below, the energy available to each American started to increase around 1960.

Since 1910, carbohydrate took a dip but has risen again since the 1960s back to around the levels they were a century ago.  Meanwhile, fat has been on a steady upward trend.  There are more than 600 calories of fat available per day person in the food system compared to a century ago.

The reasons for this shift in our food system are complex and multifaceted.  However, I think the central factor is our appetite for foods that are cheaper and more convenient, whether that be at home, at work, when you go out to eat or on the battlefield feeding an army.

If you want to understand the politics behind the agricultural subsidies that contributed this explosion in energy availability I highly recommend you read Robb Wolf’s bonus chapter from his Wired to Eat which you can download for free here.

The data below is based on the “loss-adjusted” consumption data which accounts for wastage and gives us a better indication of the amount of food eaten.

Overall, it seems, vegetables and fruit don’t make up a large proportion of our energy intake compared to:

The chart below shows the change in intake from each food group.

Based on this data, if you wanted to play it safe, you could simply:

If we drill down into the added sugars category, we can see that high fructose corn syrup (which is made from the oversupply of corn brought about through agriculture subsidies) increased by up to 170 calories per day, replacing the unsubsidised cane and beet sugar as the sweetener of choice.

Since 1999, use of HFCS has fallen, with a lot of people trying to reduce added sugar and the increasing use of artificial sweeteners (e.g. Splenda which was approved by the FDA in 1999)

Sugar made a slight come back since the late 80s, but nowhere near the levels of sugar used in the early 70s before the agricultural subsidies were ramped up (280 calories per day or 14% of energy intake in 1970).

Wheat and corn increased until the turn of the century.  But similar to added sugars, they have decreased since around 2000

Now here is the real clanger, the breakdown of the change in added fat!

Despite the innocuous sounding title, the increase in ‘salad and cooking oils’ is not just people adding a bit of extra olive oil to their salads.  Soy, canola and corn oil make up the vast majority of the added fats in our diet.

Canola oil was marketed as a low cholesterol alternative to saturated fat.  The theory was that Canola was safe because it didn’t turn solid at room temperature and hence would not clog our arteries and cause heart disease like saturated fat (importnat not: if your arteries and blood are ever at room temperature you have some much bigger issues to deal with than your choice of fat)!

Our use of them is booming everywhere![9]

There are some who believe that many of our health woes are primarily due to saturated fat and or excess consumption of animal-based foods.  However, the consumption data does not support this belief.

Growth in monounsaturated and polyunsaturated fats (mostly from subsidised soy, canola and corn) have increased by six times that of saturated fat.  Given that meat and dairy consumption has been fairly stagnant, it is likely that even the increase in saturated fat is mostly from plant-based sources!

When we combine subsided starches with subsidised fats we get a hard to beat combination that is hyperpalatable and cheap.   Unsubsidised unprocessed whole food doesn’t stand a chance!

The cost of good nutrition

Unfortunately, good nutrition comes with a price.  The table below shows common grocery items sorted in terms of macros and cost per 2000 calories.[10]

While most people won’t drink a lot of canola oil or eat a lot of plain sugar or flour, cheap processed food is typically a mix of refined fat and carbs with less protein and fibre.

At a fundamental level, I believe this is an issue of equity and discrimination against the most vulnerable people who can’t afford to invest in their health, whether in the supermarket, the gym, or the medical system.

Given the expense of obesity-related disease on our economy it would make sense to remove the subsidies from grain products and do what we could to make nutritious high satiety foods more affordable for the people who desperately need them.

I would love to see an economic analysis of the benefits to farmers who receive subsidies to help them create cheap energy versus the whole of system cost of health care, lost productivity and drugs one the economy as a whole.  Perhaps this will help to change policy in the future? But for now, you need to make an investment in your health.

Hopefully, providing people with better nutritional education and an understanding of what is really happening to them will help to cause a shift in the food market, with manufacturers responding to the demands of consumers for high satiety nutrient-dense foods.

What does this all mean?

Natural foods found in nature tend to contain either carb (e.g. summer or tropical foods) or fat and protein (e.g. winter or foods found closer to the north or south poles) but very rarely both at the same time.  The closest we get is milk (which is designed to help babies grow) and some nuts like acorns (which are available in autumn to help animals store fat to survive the coming winter).

However, our modern food system is full of the cheap products of subsidised agriculture which are a blend of fat and starchy refined grain products from wheat and corn that fuel our fat and glucose metabolisms at the same time in a way that has never occurred before!

These highly processed ingredients are mixed together and then artificially flavoured and sweetened to taste better than nutritious whole foods ever could!

Due to our survival instincts, we have no “off switch” for these modern Frankenfoods.  We just keep eating as long as we have access to them, even though they don’t provide much in the way of the nutrients we need to thrive.

What should you do?

Correlation doesn’t equal causation but is going to be a safe bet to avoid foods that contain the ingredients that have exploded in parallel with the obesity epidemic.

Your mission, if you choose to accept it…  Next time you go to the supermarket try to put nothing in your trolley that contains some combination of vegetable oils and flour listed on the ingredients.

Addendum – How to read food labels

To help you understand what this means in practice, I thought it would be useful to highlight what to look out for on food labels.

Unfortunately, our taste buds have acclimatised to potato chips.  Our ‘bliss point’ keeps on moving, requiring foods to be sweeter and with more and more flavour just to keep achieving the same stimulatory effect.

“Once you pop you just can’t stop”, but that’s because they’re made from a mixture of potato, oils, corn flour, wheat starch and flavourings.

Try to find a mayo on your supermarket shelves that isn’t mainly seed oils.

While Ritz crackers claim to be the “rich buttery classic” ironically they don’t actually contain butter, just a mix of flour, vegetable oils, salt and HFCS!

It seems even chocolate needs a healthy dose of vegetable oils these days!

Before you graduate to practice on your own in the supermarket, I’ll leave you to spot the processed starches and oils in the last couple by yourself…