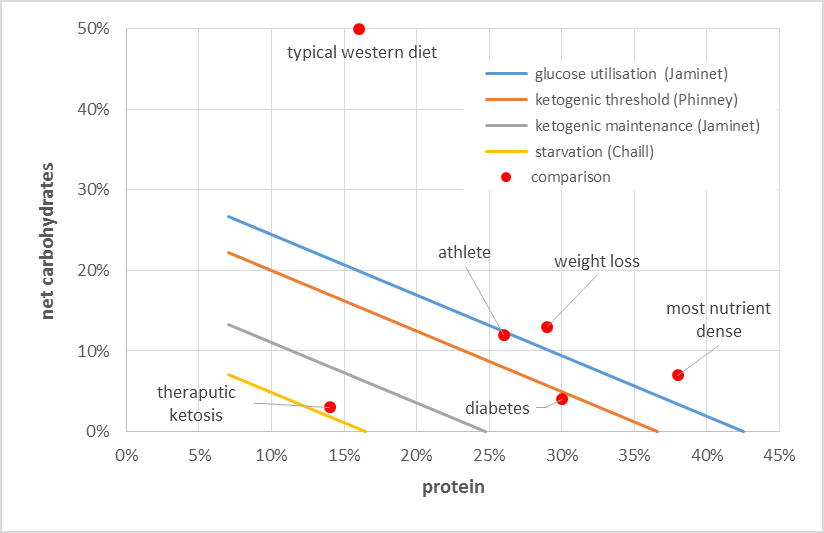 A number of attempts have been made to rank foods based on their nutrient density or some other measure.

Useful parameters that can be used to optimal foods for different goals include:

This article details a new system that combines these parameters to identify optimal foods for different goals such as:

My hope is that all this number crunching will help take the some of the guess work and ambiguity out of nutrition.

If we agree that we should focus on nutrient dense foods that don’t overload our pancreas’s ability produce adequate insulin, then we can move closer to agreeing which foods are optimal for an individual’s individual needs.

Firstly let’s take a look at a number of approaches that have previously been used to rank and prioritise foods.

As popularized by Dr Robert Atkins, limiting carbohydrates is a simple way to prioritise foods to reduce insulin demand.

By restricting carbohydrates intake, a range of foods are excluded, particularly those that are highly processed and contain added sugars.

While a low carb approach will reduce the insulin load of our food, no specific consideration is given to nutrient density or food quality.

I think there is an element of genius to Fuhrman’s nutrient density ranking system.  However when you look in the detail you find it is based on a select range of vitamins and minerals without any consideration of beneficial amino acids or fatty acids.

Fuhrman’s nutritarian approach has come under criticism for excluding a number of essential nutrients and placing extra emphasis on more fringe measures such as “oxygen radical absorbance capacity”.

While claiming to be “evidence driven”, without the inclusion of amino acids or fatty acids Fuhrman’s “nutritarian” approach ends up being heavily biased towards plant based foods.[3]

Another issue with Furhman’s ANDI is that it can be skewed by a single nutrient present in very high quantities. For example, kale ranks at the top of Furhman’s list primarily due to its massive amount of Vitamin K.  Unfortunately, a mega dose of Vitamin K, which is a fat soluble vitamin, may have limited use by itself.  Rather than finding foods that are high in one nutrient it would be ideal to identify foods that were high in a broad range of nutrients.

Ranking foods in terms of nutrient density per calorie also tends to prioritise leafy veggies, which is great if you are trying to lose weight but not ideal if you’re an athlete trying to fuel up for an intense workout on kale and watercress.

While I think most people would benefit from consuming more green leafy vegetables, in the long term I think they will also benefit from foods with adequate protein protein and beneficial fatty acids.

In the short term someone who is obese has plenty of excess fatty acids and amino acids to spare so they will likely feel great as they are losing weight, however as their weight loss slows and they stop feasting off their own protein and fat the benefits of the a very low fat, very low protein approach may diminish.

It’s interesting to note the foods to which it gives a score of 100 including:

While the stated goal of the NuVal system is to combat diabetes, the food insulin index[5] shows that many of these foods will be problematic for a diabetic trying to maintain normal blood glucose levels.

Some of the more puzzling scores thrown up by the system include:

Other concerns with the NuVal system include:

Another noteworthy foray into the realm of optimising nutrition is Rob Reinhardt’s Soylent.[8]

Reinhardt set out to produce a manufactured food that ticked off all of the micronutrient Recommended Daily Intake (RDI) values, while reducing the cost and the hassle of food preparation.

While Reinhardt notes that his creation would be healthier than the ramen noodles that he was living on before creating Soylent[9], there are a number of downsides to this food replacement which is basically a protein shake on steroids.

Using manufactured foods leaves you exposed to not getting all of the non-essential micronutrients or even the beneficial nutrients that haven’t made it to the current list.  Eating real whole foods seems to be a safer option to ensure you are getting all the nutrients you need.

After reviewing the various options available and finding them lacking, Dr Mathieu Lalonde developed an excellent ranking of foods based on nutrient density per weight of food using the USDA food database.[11]

This analysis identified organ meats as one of the more nutritious foods, followed by herbs and spices, nuts and seeds.

In this video of his AHS2012 presentation Lalonde noted that people wanting to lose weight may wish to prioritise in terms of nutrient density per calorie, however he chose to analyse nutrient density in terms of weight as that might be more relevant for athletes (Lalonde is a CrossFit athlete as well as a biochemist). [12]

After watching this video and hearing about his quantitative approach to nutrient density I was left excited, yet a little unsatisfied, wondering what the ranking might look like in terms of nutrient density / calories.

fibre per calorie for gut micribiome

One of the more interesting concepts in the area of nutrition recently is that what you eat could affect your gut bacteria.

Typical daily fibre intake is around 17g for those of us in western civilisation compared to the Recommended Daily Intake (RDI) of 25 to 30g per day.[17]

Fibre is not digestible by the human gut and hence it does not provide energy or cause a rise in blood sugar or insulin.  Fibre in our food neutralises the insulinogenic effect of carbohydrate.[20]

If we rank for fibre per calorie we end up with a few spices such as cinnamon, curry powder, or cocoa at the top of the list along with veggies such as turnip, artichoke, sauerkraut, and cauliflower.

Again, this list is interesting, but not something you can live by.  Somehow we need to combine all these approaches to arrive at a more useful list that balances all of these considerations.

what are the “essential nutrients”?

So after reviewing these ranking systems I thought it would be interesting to design my own that would build on these previous approaches as well as considering the insulin response to food to make it more useful for people with diabetes.

The obvious starting point is to agree on the nutrients that should be included.  Listed below are the commonly accepted list of essential amino acids, vitamins and minerals.[21]

The list of essential and conditionally essential fatty acids is shorter than the other lists and is largely made up of omega 3 fats that the human body cannot manufacture in sufficient quantities. We need to go out of our way to incorporate these into our diet.

Given that a large part of my focus is to create a system that prioritises diabetic-friendly foods, I thought it would be good to give some more detailed consideration to other ‘good fats’, given that fat typically comprises more than half of the calories for someone following a reduced carbohydrate approach.  Listed below are the additional fatty acids that research shows to be beneficial.

You can read more on the reason for inclusion of these additional good fats the Good Fats, Bad Fats article.

Building on Joel Fuhrman and Matt Lalonde’s nutrient density approach, the nutrient density index is a relative score calculated by comparing the amount of a particular nutrient in each food against all of the foods.

For example, if a particular food has an average amount of Vitamin C compared to the 8,000 other foods in the database it will get a score of zero because it is zero standard deviations from the mean.  If it has a large amount of a certain nutrient then it will receive a high score.

If the amount that a particular nutrient is two standard deviations from the mean then it will get a score of two for that nutrient.  If however it is five standard deviations from the mean it gets a maximum score of three in order to avoid prioritising foods that have massive amounts of one single nutrient versus foods that have solid amounts of a range of essential nutrients.

The nutrient score for a food is the sum of the individual nutrient scores across the forty three nutrients.  The higher the score the more nutritious that food is in comparison to the other foods in the database.

Weighting one nutrient as more important than another could be useful for an individual with a particular goal or health condition (e.g. DHA for someone battling brain cancer).  However I have chosen to keep ‘clean’ to avoid arguments about bias with equal weighting given to each nutrient.[22]  This system will simply highlight foods that have a wide range and a high quantities of nutrients.

Ranking foods by an individual parameter is interesting, however it doesn’t produce a balanced list of foods that you can live by.  Where things start to get interesting is when we combine the different parameters using a multi criteria analysis to suit different goals.

As an engineer I often use a multi criteria analysis (MCA) to analyse a lot of data.  A numerical MCA is a useful way to make sense of a large amount of data and shortlist from a wide range of options.

The available parameters from the USDA foods spreadsheet are:

I have refined these weightings used in the MCA by reviewing the top 500 foods (of the 8000 foods in the USDA foods database) for each scenario.

The big differentiator across the approaches is calorie density.  If someone has stabilised their blood glucose and insulin levels then the next step in the journey may be to decrease calorie density to naturally manage food intake.  The fat loss approach is slightly more insulinogenic however practically it will be difficult to fit in all the food.

While this process is somewhat convoluted the end result is a fairly simple list of foods that are ideal for different goals.  I have included a shortlist of the highest ranking foods on the blog here along with ‘cheat sheets’ that you can print and stick to your fridge or compile your food lists from.

It’s been great to see many people benefit from focusing these shortlists.  If you’re inquisitive and like to ‘peek under the hood’ I have also included links to a more detailed list that shows the basis of the rankings for each food.