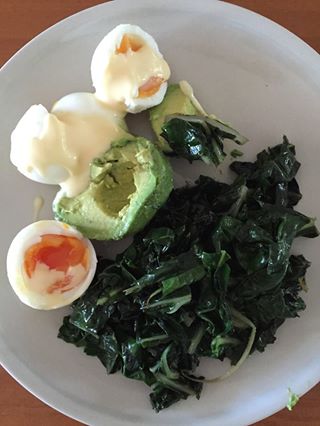 This simple breakfast idea was inspired by Tim Ferris’ slow carb breakfast with spinach and eggs with some avocado and hollandaise sauce thrown in for good measure.  Lots of fibre, only two grams of net carbs, truck loads of nutrition and a very gentle impact on blood sugars.

Initially when I started running meals through the ranking system I was interested in analysing a wide range of meals and approaches that people had found useful to see what could be learned.  In the Four Hour Body Time Ferriss details his concept of a “slow carb” breakfast which he shows you how to make in this video.  From the feedback it seems that this approach has worked for a lot of people.

Ferriss’ based recipe involves frozen spinach, eggs, flaxseed oil, lemon juice and salsa and all done in the microwave in less than three minutes. Perfect time-efficient bachelor chow!  Maybe?  Or maybe not?

I find Tim’s podcast fascinating (not just about diet).  He’s always looking for life hacks and learnings to improve productivity.  It’s interesting to note that Tim more recently has transitioned to a more ketogenic dietary approach to improve recovery and mental performance.

The base recipe that he discusses in this video isn’t necessarily low carb (with lentils) or high fat (he uses egg whites rather than whole eggs to minimise fat) but it is quite nutrient dense with the eggs and the spinach.

Dropping the lentils and using whole eggs rather than egg whites provides a much better protein score and much more diabetic friendly 11% carbs as you can see in the analysis below.

The analysis below is with lentils and whole eggs.  The lentils option had a lower vitamins and minerals score but a higher amino acid score with a wider range of proteins.

In the end, I think the option with spinach, eggs and avocado is a great balance between nutrient density, protein completeness and diabetic friendly high fat / low carbs.